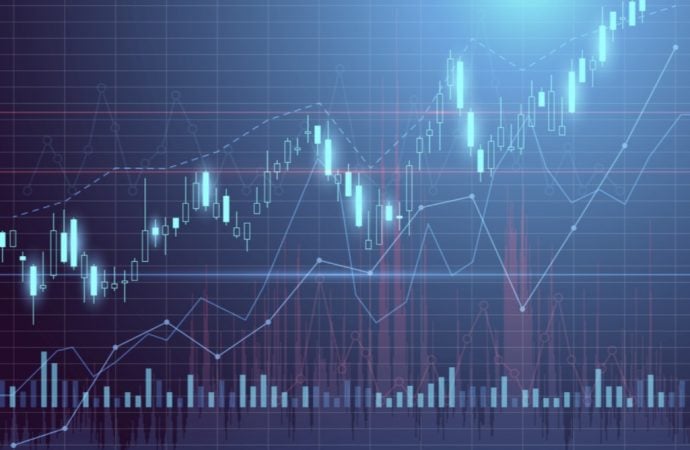 Down 0.32%, the US dollar index (DXY) found itself on the backfoot once again last week, unearthing an eighth consecutive weekly decline.

Wrapping up July, price action crossed paths with 92.71, a daily bear flag (between 95.72/97.45) take-profit target, measured by calculating the preceding move and adding the value to the breakout point – pink. A consolidation has since surfaced between 92.71 and neighbouring supply at 94.02/93.56. The supply effectively represents the decision point to initially grapple with 92.71. Clearance of the aforesaid supply adds weight to an upside move forming this week to resistance at 95.03, yet stripping 92.71 and addressing support nearby at 92.26 is also a potential scenario.

Regarding the 200-day simple moving average, currently circling 97.80, the dynamic value is curving to the downside, two years after mostly drifting higher. Traders with a focus on momentum-based indicators will also acknowledge the RSI oscillator exited oversold space in recent trading, recovering from troughs as far south as 17.00.

The euro nudged to a third successive monthly gain against the US dollar in July, adding nearly 5 percent. The move toppled long-term trendline resistance (1.6038) and made contact with the upper border of supply from 1.1857/1.1352. This argues a trend change to the upside may be on the horizon, with trendline resistance (prior support – 1.1641) on the radar as the next upside target. Also worth pointing out, though, is the primary trend remains intact, underlining a southerly course since July 2008.

Since closing out the month of July, buyers and sellers have been squaring off at the underside of an ABCD bearish pattern at 1.1872, a simple harmonic configuration. Last week’s action, as you can see, however, derailed early attempts to navigate lower, finishing the week higher by nearly 0.50 percent.

In reference to the RSI indicator, despite recently departing overbought territory, the value appears reluctant to commit to the downside.

Mid-way through London’s morning session Friday, price whipsawed beneath 1.18, a move which missed the 100-period simple moving average by a hair, though was ultimately reinforced by H4 demand underscored above at 1.1771/1.1794. After securing ground north of the psychological level, local demand at 1.1806/1.1818, the decision point to break a local high at 1.1826, received candle action and drove upside to highs at 1.1850.

The RSI value gained speed above the 50.00 centreline Friday, but encountered mild downside pressure heading into the close.

The euro, despite a somewhat lacklustre August, remains on reasonably firm footing on the monthly timeframe as the pair wrestles with the upper boundary of fragile supply at 1.1857/1.1352.

Conversely, until daily ABCD resistance at 1.1872 and neighbouring daily supply at 1.2012/1.1937 relinquishes position, buying may be hindered this week.

Local H1 demand at 1.1806/1.1818 also deserves notice, an area with ‘whipsaw’ stamped across it in favour of perhaps clawing in any buyers inhabiting the 1.18 vicinity.

Despite removing trendline resistance, however, the market’s primary trend still points south, demonstrating a series of lower lows and lower highs since mid-2011.

The August 7 response from supply at 0.7264/0.7224, by way of a bearish outside day reversal (stationed underneath another supply at 0.7346/0.7282), proved insignificant last week as candle movement entered a stationary phase.

As a result, the technical landscape on the daily timeframe remains concentrated on support at 0.7067, as well as the aforesaid supply this week.

With reference to the RSI indicator, the value has been toying with the 60.00 level since August 7.

April, May and June were pretty uneventful, with the latter wrapping up indecisively in the shape of a neutral doji candlestick pattern. July, nonetheless, sunk nearly 2 percent, consequently testing the lower boundary of the descending triangle, while August currently trades higher by 0.60 percent.

Having monthly support at 104.62 make a show, price on the daily timeframe recently made contact with supply at 107.58/106.85 and turned lower Friday, modestly snapping a five-day bullish run.

Further losses this week targets a drop-base-rally demand area at 105.25/105.71, whilst shattering current supply could have buyers pursue resistance formed by way of the 200-day simple moving average at around 108.11.

The RSI value recently gave up its 50.00 centreline to the upside, yet mildly turned to 52.00 into the close.

As visible from within the said demand, buyers put in a half-hearted attempt to regain some ground late Friday. Dipping into deeper water this week, therefore, shifts demand at 105.92/106.16 into sight.

Beyond the aforesaid structure, support forms at 109.19 with a break uncovering the 106 level.

Coming from monthly support at 104.62, the reaction from daily supply at 107.58/106.85 may be short-lived, implying the 200-day simple moving average could eventually surface.

In conjunction with monthly support, H4 demand at 106.39/106.64 and H1 demand at 106.49/106.35 (along with additional technical confluence) may seduce buyers in early trading this week, leaning towards the 107 neighbourhood as an initial target. 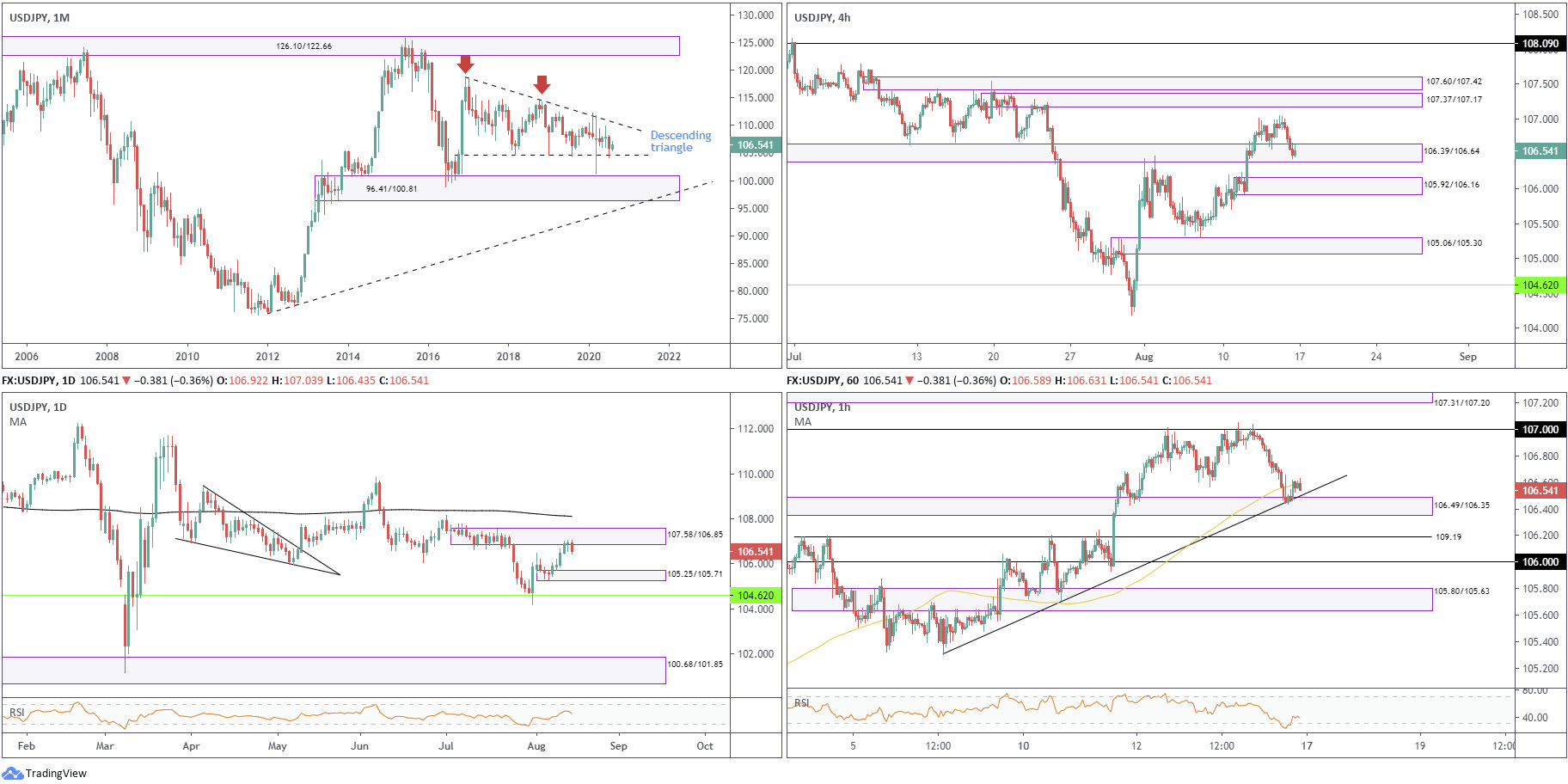 August has so far offered little movement, trading flat as of current price.

After squeezing through the 200-day simple moving average (July 21), currently fluctuating around 1.2709, and toppling supply at 1.3021/1.2844, price action has spent the majority of August attempting to find support off the latter as a demand. As you can see, action was somewhat muted last week finishing most sessions off best levels. To the upside, resistance at 1.3201 is seen as the next point of interest, located south of a 161.8% Fib ext. level at 1.3264.

The RSI oscillator marginally exited overbought status at the beginning of last week, yet seems unwilling to commit to the downside.

Recently, however, a small rising wedge emerged between 1.3005 and 1.3124, a chart formation that may remain in motion until we cross paths with daily resistance at 1.3201.

US trade welcomed familiar supply at 1.3150/1.3127 back into the fold Friday, forcing the RSI into overbought territory and strong-arming price movement back under the 1.31 level to newly formed demand at 1.3062/1.3079 (an area where buyers made the decision to initially brush through 1.31 resistance).

Technicians will note the 100-period simple moving average joining current demand and the 1.3050 support in the event of a push lower.

The rising wedge forming on the H4 timeframe could eventually trigger a mild reversal south, should its lower limit give way. Defending the lower boundary of the rising wedge, however, is reasonably notable demand on the H1 at 1.3062/1.3079.

On account of monthly price suggesting higher levels, daily price trading at demand (albeit echoing a fragile tone), H4 approaching the lower base of a rising wedge (which in itself is a trendline support) and H1 testing demand at 1.3062/1.3079, buyers could push higher from the aforesaid H1 demand (or 1.3050 support) in early action this week. Closing above 1.31 will, of course, draw in additional buying in favour of a H1 supply break at 1.3150/1.3127.