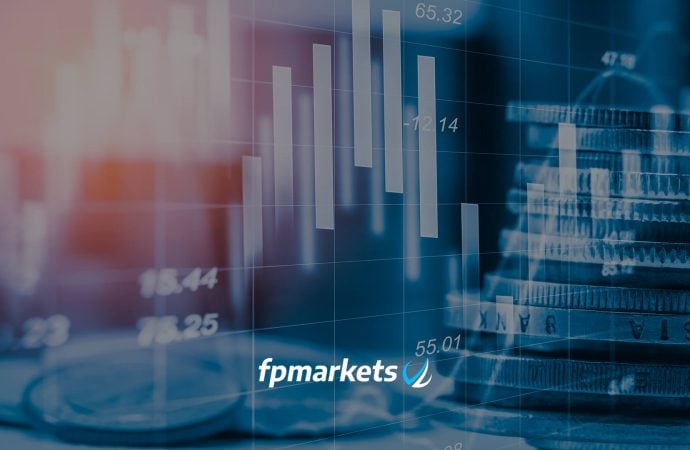 The US dollar index, calculated by factoring in the exchange rates of six major world currencies, is seen closing in on its 99.00 handle after toppling the 200-day SMA around 97.80. The breakdown in oil prices, down nearly 20%, coronavirus evolving into a global epidemic, according to the World Health Organisation (WHO), several central banks slashing interest rates and US treasuries staging an impressive rebound from all-time lows, helped the buck snap a two-week losing streak in recent trading.

Up 2.7%, aside from 99.00, the DXY has eyes for daily supply at 100.03/99.37 drawn from April 2017, which holds within its upper boundary the widely watched 100.00 figure. Although ripe for further gains this week, technically speaking traders may want to pencil in the possibility of a retest at the 200-day SMA. It might also be worth noting the RSI recently crossed 50.00, currently trading at 57.00.

March, as you can see, manoeuvred the pair into demand-turned supply at 1.1857/1.1352. Leaving long-term trendline resistance (1.6038) unchallenged, price reversed and is now on track to chalk up a shooting star bearish candlestick signal and potentially revisit demand mentioned above at 1.0488/1.0912.

What’s also notable from a technical perspective is the RSI indicator recently exiting overbought levels, fading peaks at 82.00 (values not seen since March 2008) and eventually breaching the 50.00 value.

Having shown some resilience from demand at 1.1038/1.1072 Thursday (considered significant given it was likely the decision point to break the 1.1095 January 31st high), after elbowing through double-bottom support around 1.1094 (blue arrows), the candles revisited the underside of a demand-turned supply at 1.1218/1.1245. Withstanding a number of upside attempts at 1.1218/1.1245, buyers eventually stepped down with price action returning to the aforementioned demand base into the close.

Should we see another leg down this week, traders’ crosshairs will likely be fixed on 1.1005/1.0979 as potential demand.

Europe’s shared currency failed to maintain an upside presence north of 1.12 vs. the US dollar Friday, weighed by robust USD bidding and a healthy recovery in US Treasury yields. H1 eventually softened beneath 1.11 in the later stages of the day, likely running sell-stop liquidity beneath the round number.

Bottoming a touch above 1.1050, traders witnessed price marginally reclaim 1.11 into the week’s end. In addition, the RSI shows bullish divergence.

Monthly price portends lower moves this week, placing a question mark on the 200-day SMA and 61.8% Fib retracement at 1.1051 on the daily timeframe as potential support. Daily demand at 1.0940/1.1002, therefore, may come forward, though also faces opposition from the monthly time frame.

The top edge of monthly demand, the next downside target on that timeframe, is seen around 1.0912, 30 points beneath the said daily demand zone.

Although monthly structure suggests further loss, the combination of H4 demand at 1.1038/1.1072, the 200-day SMA, along with H1 price recently reclaiming 1.11+ status after tripping sell-stops south of the level, could be enough to encourage an upside move in the early stages of the week. Upside targets fall in around 1.12, followed by H4 demand turned supply at 1.1218/1.1245. 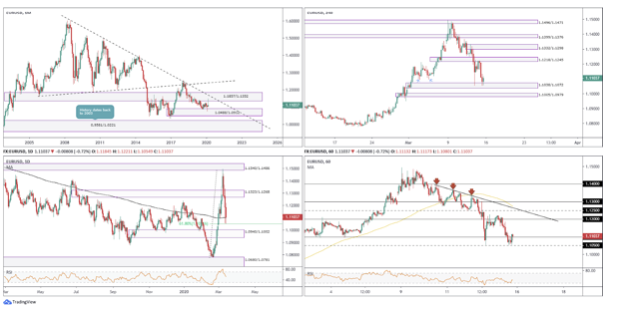 AUD/USD powered into demand at 0.6330/0.6245 at the beginning of the week, generating a 270-point recovery. As impressive as it was, price failed to sustain gains above resistance at 0.6680ish (red oval) and resumed a downward trajectory throughout the remainder of the week, eventually dethroning the said demand zone and reaching lows of 0.6123. This may have an unshackled downside to another layer of demand coming in at 0.5926/0.6062 this week, holding a 161.8% Fib ext. level around its upper edge.

The 161.8% Fib ext. level at 0.6241 elbowed its way into the spotlight Thursday, staging a half-hearted recovery and testing resistance at 0.6314, last Monday’s low.

AUD/USD swerved to multi-year lows Friday amid broad-based USD strength, mildly snapping through 0.6150 and testing channel support (0.6212). Buyers, as you can see, made a last-ditch attempt to reclaim 0.62, but failed at highs from 0.6241.

Additional technical structures worthy of note on this scale are channel resistance (0.6384), the 0.63 handle and a trend line resistance from 0.6684. To the downside, 0.61 is in sight, closely aligned with a 161.8 Fib ext. at 0.6099. We are also seeing modest bullish divergence out of the RSI indicator.

In light of the higher-timeframe picture pointing to lower prices this week, intraday sellers may still consider shorts south of 0.62 on the H1, targeting 0.61, which is set around the top edge of monthly demand at 0.6094/0.5866, the next downside target on that scale.

March, so far, breached the lower edge of the descending triangle, yet has recovered in reasonably strong fashion, leaving nearby demand at 96.41/100.81 unchallenged. Note current action trades in the shape of a hammer candlestick signal.

H4 timeframe:
Friday navigating higher ground produced the final D-leg to an AB=CD bearish pattern, terminating around 108.08. Note for this pattern to remain valid, the 161.8% Fib ext. at 108.90 must remain intact. Traditional take-profit targets associated with AB=CD formations generally reside around the 38.2% and 61.8% Fib retracement levels of legs A-D – in this case, at 105.67 and 103.93.

H1 timeframe:
Supply at 108.89/108.50 made a showing in the later stages of Friday’s upside move, after whipsawing through channel resistance (105.91). The two combined likely appeals to price-action based traders, with 107 set as a logical downside target on this timeframe, assuming we take out 108. Also of note is the RSI indicator nudging its way into overbought levels, holding off peaks at 78.00.

Longer term:
Scope to advance this week is visible on the monthly time frame, though involves overthrowing the 61.8% Fib retracement at 108.02 and 200-day SMA on the daily timeframe.

Shorter term:
The combination of daily resistance highlighted above, the H4 AB=CD bearish configuration and H1 action fading supply at 108.89/108.50 as well as a channel resistance (yellow), could weigh on prices this week and draw in the top edge of daily demand at 107.09, followed by the 107 handle on the H1 timeframe.

Conservative sellers may wait for a decisive H1 close south of 108 to be seen before committing.

Friday had 1.2998/1.2981 retested again, representing a durable supply-turned demand area, which brings with it an additional beat from the widely watched key figure 1.30. Supply at 1.3071/1.3046, drawn from early February, remains in motion, with the pair closing around the underside of this base into the close. A break north this week draws focus to the 1.31 handle, boasting reasonably sound history since the beginning of the year.

The RSI, a momentum oscillator, shows overbought conditions on this timeframe, dipping from a recent peak at 80.74 and producing bearish divergence.

Shorter term:
According to chart studies on the H4 timeframe, scope to explore lower levels is possible this week, with demand at 1.2162/1.2220 in sight. Interestingly, this H4 demand area is glued to the upper edge of daily demand at 1.2178/1.2061. The H1 close beneath 1.23 is considered a bearish indicator and may draw upon 1.22 this week, assuming channel support does not throw a spanner in the works.

Overall, sellers appear to have the upper hand at the moment, likely prompting further downside south of 1.23 this week, targeting the top edge of monthly demand at 1.2235 as the initial base.