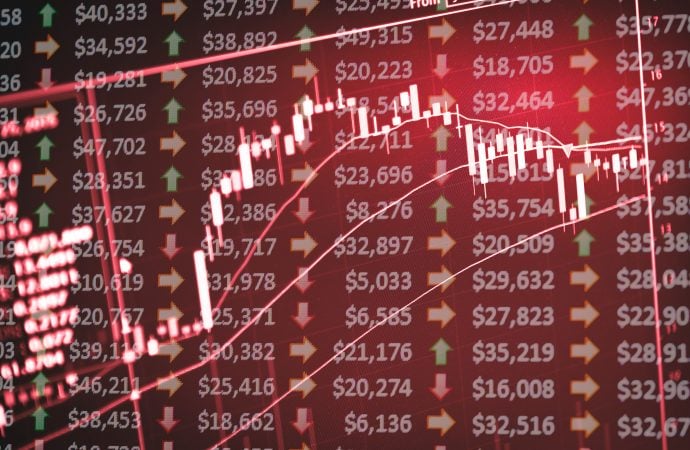 As aired in recent weekly writing, the index topped south of the 103.00 figure in March 2020 and launched a series of lower lows and lower highs (a clear-cut downtrend—price swings: see black arrows)

In terms of technical support, 91.00 calls for attention this week, with subsequent downside throwing light on support around 90.00, followed by longer-term support at 89.34. Submerging the aforementioned supports will likely add conviction to the bearish narrative, perhaps activating longer-term breakout selling interest.

Also nearby 92.38/91.96 resistance is a 200-day simple moving average, circling 92.80. MAs regularly deliver support and resistance when tested, therefore resistance off this angle is possible this week, should we take on higher territory. Traders will also note price action has traded beneath this value since June 2020—a bearish signal.

The recent test of 92.38/91.96 also brought with it an RSI overbought signal, followed up with a dip to the 60.00 neighbourhood into the close of the week.

March, as you can see, remains toying with the upper side of 1.1857/1.1352 demand, with the month currently lower by nearly 1 percent.

Price action traders will have noted this demand test.

Any decisive rebound from the aforesaid demand shifts attention back to the possibility of fresh 2021 peaks and a test of ascending resistance (prior support – 1.1641).

Dollar bulls went on the offensive Friday—lifted amid a surge higher in US Treasury yields—and weighed on EUR/USD action.

To the upside, technical traders will observe a 38.2% Fib level at 1.2021, representing an initial upside target out of AB=CD patterns.

The RSI oscillator, thanks to recent upside, is now on the brink of testing the lower side of the 50.00 centreline, with a break uncovering resistance at 60.30.

RSI movement is seen crossing swords with trendline resistance around the 50.00 centreline. A break here may spark upside movement and possibly join hands with overbought levels.

Monthly price testing demand suggests daily bulls have the legs to carry them to at least the 38.2% Fib level at 1.2021 this week.

With the higher timeframes implying buyers are to remain in the driving seat, and H4 showing room to reach resistance at 1.2027, H1 could make its way north of 1.1950 early week and trigger offers around the 1.20 figure.

March, as you can probably see, trades higher by 0.6 percent, and remains within February’s range.

Technical action out of the daily chart reveals the pair rotated lower just south of trendline support-turned resistance Friday, taken from the low 0.5506. This was largely fuelled by a USD recovery amidst a healthy surge in US Treasury yields.

It is at the trendline resistance, in light of the monthly timeframe’s technical position (see above), daily sellers could make a show this week.

RSI action, as you can see, currently tests the 50.00 centreline following an earlier bounce from 42.00.

Buyers and sellers went head-to-head at supply from 0.7811/0.7770 in the latter part of the week, an area sharing chart space with ascending resistance, drawn from the low 0.7563.

Early London adopted a bearish phase on Friday, dipping a toe in waters south of trendline support, etched from the low 0.7621. Subsequent movement registered a short-term bottom a handful of pips ahead of a 100-period simple moving average around 0.7720, which led to price retesting the breached trendline.

Interestingly, the RSI indicator is seen engaging with the 50.00 centreline, following an earlier rebound ahead of oversold levels. Nearby, the indicator also reveals two trendline resistances (green) converging.

Following January’s bullish engulfing candle and further outperformance in February, March is on the verge of mounting a bullish assault (up by 2.4 percent) on descending resistance, etched from the high 118.66 (not considered traditional trendline resistance).

As seen from the daily chart, buyers and sellers have been squaring off just beneath Quasimodo resistance at 109.38 (converges with the monthly timeframe’s descending resistance).

Price action traders are likely to be watching the aforementioned Quasimodo this week. However, knowing supply resides nearby at 110.94/110.29, stops above the Quasimodo head (blue arrow—109.85) could be taken.

Areas of note to the downside are support at 107.64—a previous Quasimodo resistance—and neighbouring supply-turned demand at 107.58/106.85.

Based on the RSI oscillator, the value reveals overbought conditions, currently spinning nearby resistance at 83.02. Also note the support formed around the 50.00ish range (common in trending environments).

Friday, just above notable demand at 108.67/108.78 (and the 100-period simple moving average), saw buyers and sellers battle for position around the 109 vicinity, forming a potential bullish flag pattern (109.16/108.90). While the aforementioned pattern is considered a bullish signal (should a breakout higher occur), relatively hefty resistance is in sight on the higher timeframes which may hinder upside.

With reference to the RSI oscillator, we are seeing the value marginally rebound from trendline support, following Friday’s retreat out of overbought territory.

With daily Quasimodo resistance at 109.38 and the monthly timeframe’s descending resistance joining hands, this area may welcome selling this week if tested. However, before sellers put in an appearance, a whipsaw to daily supply at 110.94/110.29 could take shape.

Therefore, upside momentum derived from any breakout above the H1 bullish flag may flatline and sellers may make a show.

February followed through to the upside (1.7 percent) and refreshed 2021 highs at 1.4241, levels not seen since 2018. March, on the other hand, has so far been lacklustre, unchanged as of current price.

Trendline support, drawn from the low 1.1409, and support coming in at 1.3755, remain key levels on the daily chart this week.

Quasimodo resistance drawn from 1.4250 is also worth a shout, should buyers enter the scene, while territory beneath 1.3755 places Quasimodo support at 1.3609 in the line of fire.

On the basis of the RSI indicator, the value recoiled from support between 46.21 and 49.16, pursuing terrain north of the 50.00 centreline into the close.

In the shape of a doji indecision candle, last week watched H4 withdraw from levels a few pips beneath Quasimodo resistance at 1.4007 (aligns with a 50.00% retracement). This led to a mostly one-sided decline Friday, testing waters ahead of 1.3852 support.

As the H4 topped beneath Quasimodo resistance at 1.4007, H1 shaped a shooting star candle at the widely watched 1.40 level.

1.40, a psychological level that’s capped upside since late February, was clearly welcomed by sellers in early trading Friday, delivering a 140-pip decline. As you can see, though, following a brief spell under 1.39 (and the 100-period simple moving average), buyers staged a modest comeback (ahead of support at 1.3861) and reclaimed 1.39+ status into the closing hours.

Monthly price remains optimistic above trendline resistance, whereas daily price is poised to bring in trendline support and support coming in at 1.3755.

H1 reclaiming 1.39 and the 100-period simple moving average to the upside is likely to be viewed as a bullish signal on shorter-term charts. Therefore, a retest of these levels may spark a bullish theme back to 1.40 this week.