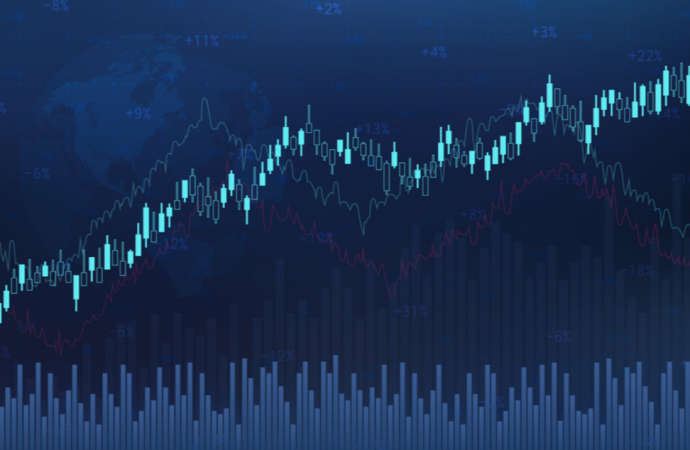 Measured by the US dollar index (DXY), the USD tentatively snapped a three-week losing streak over the course of recent trading. Despite this, technical elements argue buyers may be reluctant to commit this week. Besides 91.00 proving stubborn resistance, additional 8-month daily trendline resistance (102.99) occupies the 91.25 area. Down south, focus is likely channelled towards daily demand at 89.83/90.29.

As indicated in previous writing, the market’s primary trend exhibits a bearish outlook on the monthly chart, entrenched within a bulky pullback since May of 2008. Since 2016, however, resistance developed around 103.00, causing the daily timeframe to form a series of lower lows and highs in 2020 – some may consider this the secondary trend.

With reference to the daily timeframe’s RSI value, the indicator recently dipped into oversold territory (an area not visited since August of this year) and made a run for the exit last week. As a bonus, the upper side of a declining wedge was also breached, announcing a bullish reversal signal. Interestingly, the upper side of the chart-based daily declining wedge (94.30/92.18) has yet to be taken.

Concerning the 200-day simple moving average, circling 95.68, daily action crossed below the dynamic value heading into the close of May, 2020.

Following the break of long-term trendline resistance (1.6038) in July, and subsequent break of supply from 1.1857/1.1352 in August, a modest correction surfaced. However, buyers making an entrance in November and December trading higher by 1.6 percent argues additional upside may be on the horizon, with ascending resistance (prior support – 1.1641) perhaps targeted.

Since the beginning of last week, price has also been in the process of establishing a bullish flag pattern (1.2177/1.2078) off 1.2095, a level now serving as support. Towards the latter part of the week, as you can see, the pair modestly closed above the bullish flag’s upper side. This suggests not only could EUR/USD reach for the descending wedge pattern’s take-profit target at 1.2318 (yellow) this week, but also the bullish flag’s take-profit level at 1.2384 (purple).

Puncturing the aforesaid supply this week communicates an early cue the pair may be headed for the daily descending wedge pattern’s take-profit target at 1.2318.

With the exception of an early slide in Europe Friday, volatility diminished considerably during European and US trading hours. Supply at 1.2151/1.2132 choked upside attempts off the 100-period simple moving average, and slipped the 1.21 level into range.

In terms of the RSI movement, the week ended under the 50.00 level.

Room to rally on the monthly chart, in addition to the two bullish patterns forming on the daily chart, implies buyers could attempt to refresh year-to-date highs this week.

Those following higher timeframe flow are likely to be drawn to H4 demand at 1.2040/1.2065, predominantly at the point the area meets H4 trendline support (green).

1.21 on the H1 chart lacks technical confluence, therefore bringing light to a possible test of H1 demand at 1.2060/1.2076, secured around the upper side of current H4 demand. 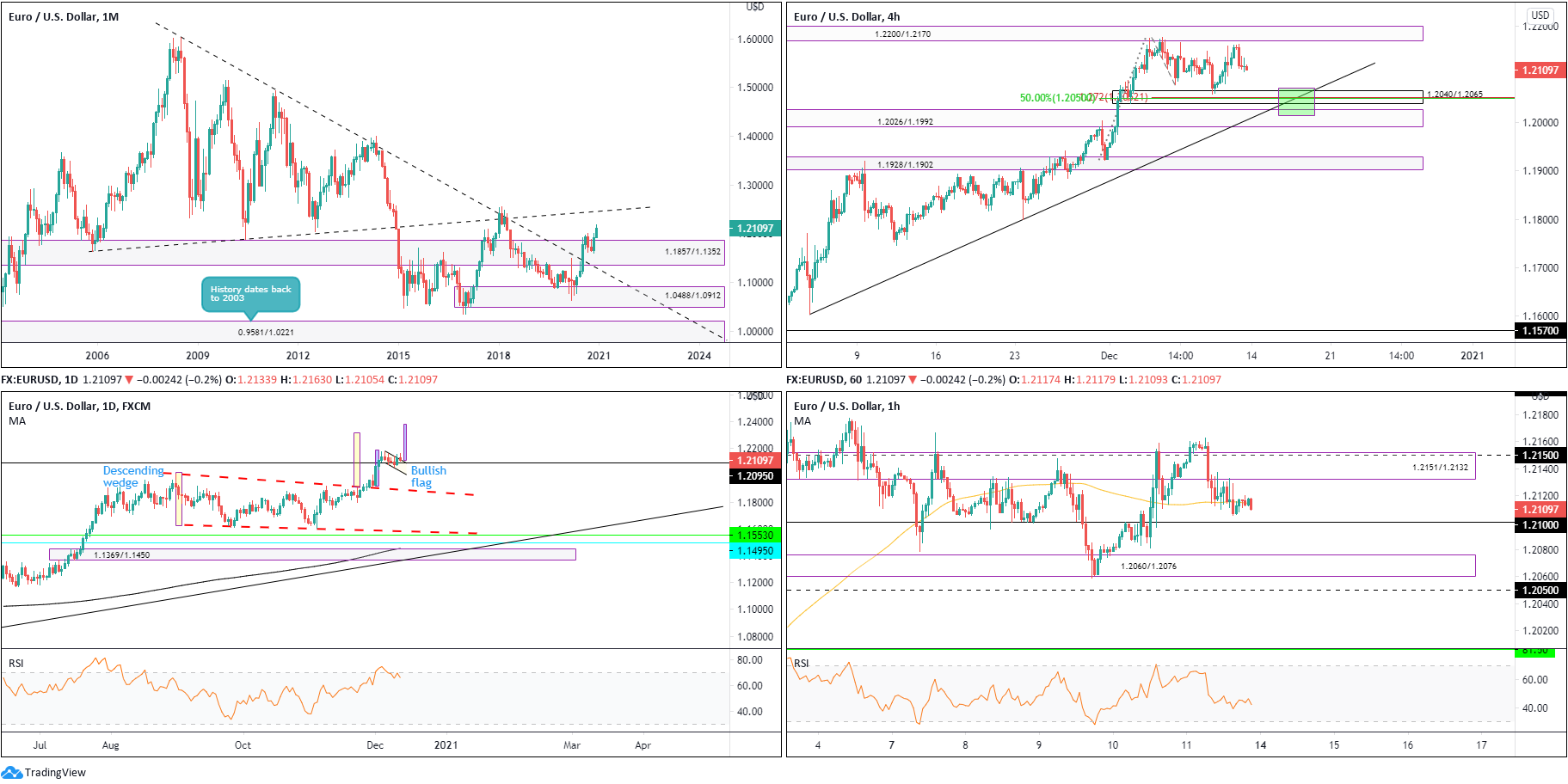 Following a mild correction that addressed the upper border of demand at 0.7029/0.6664 (prior supply), buyers have so far responded well. Up by 4.5 percent in November, with December also trading higher by 2.6 percent, buyers appear free to explore as far north as 0.8303/0.8082 in the coming months, a supply zone aligning closely with trendline resistance (prior support – 0.4776).

With reference to the immediate trend, we’ve been trading higher since bottoming in March.

Thursday invading offers around resistance at 0.7482 led Friday to fresh 30-month highs. Moderate selling, as you can see, unfolded, guiding technical eyes back to 0.7482 support.

Volatility dropped off heading into European trading Friday, generating an ascending wedge pattern (0.7542/0.7520). Having seen the lower side of the formation breached at the close, and the RSI take on trendline support, sellers may spin things towards the 0.75 level in early trading this week.

Breaking the lower side of the H1 ascending wedge pattern signals 0.75 could make a show, and possibly lead to a test of H4 support at 0.7482.

0.7482/0.75 combined forms an area of support buyers may be drawn to this week, in light of the immediate uptrend (see daily chart) and room to rally on the monthly chart.

Support at 103.70 made its presence known again at the beginning of December, arranged just ahead of demand from 103.04/103.58. Traders will also note resistance is seen at 104.73. Having both the support and resistances welcome at least two consecutive tests, the H4 chart is considered rangebound for the time being.

An additional feature worth considering is the ascending wedge pattern (103.67/104.31). As you can see, the lower side was breached Friday and triggered continuation selling, with 103.70 support targeted along with nearby demand at 103.04/103.58.

Friday’s price action around the 104 level proved disorderly, likely causing pain on both sides. Following an early slide in US trading beneath the 100-period simple moving average, the pair finished Friday modestly south of 104, with subsequent selling to possibly draw things to support at 103.70 (the lower side of the H4 range).

In terms of RSI action, the value elbowed beneath 50.00 and penetrated support at 44.05, with the latter now serving as resistance.

As aired in recent research, the monthly chart signalling lower levels and the daily chart currently void of support, left H4 sellers in a favourable spot following the break of the H4 ascending wedge pattern. This also indicates H1 sellers are eventually likely to take control of 104 and head for 103.70 support on the H4 this week. 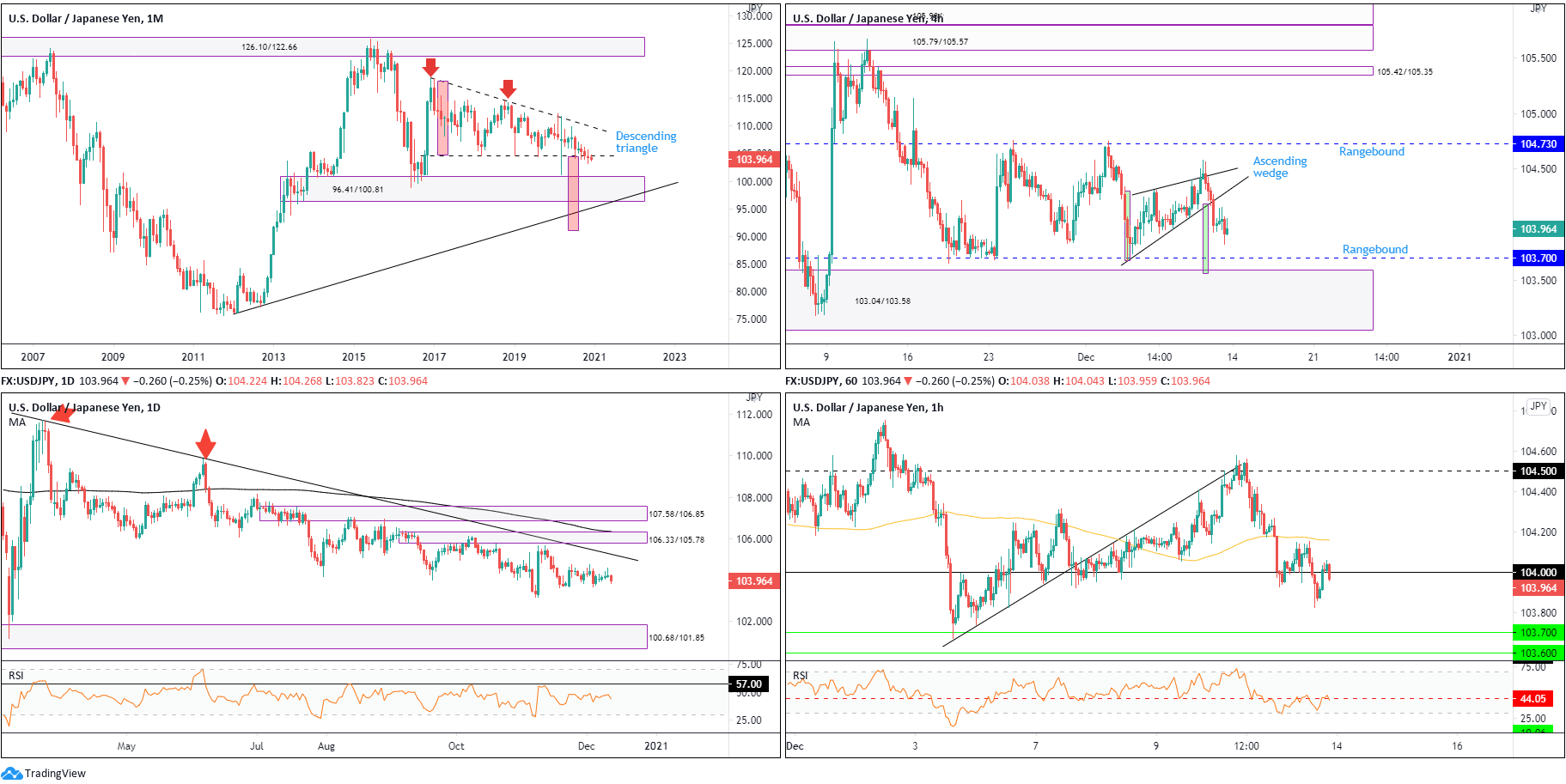 With monthly trendline resistance making an entrance and daily supply also recently joining the fight at 1.3622/1.3467, sellers have since taken the lead, possibly eyeing 1.2645/1.2773.

RSI followers will also see the line rounded ahead of overbought territory, and is currently navigating space below support around 47.00.

Sterling was a clear underperformer last week, dominated by Brexit gloom. Warnings that the UK may be headed for a no-deal Brexit directed GBP/USD southbound in the latter part of the week, consequently pushing aside demand at 1.3240/1.3273.

RSI traders will observe the value is ranging between 51.00 resistance and oversold space.

Monthly price flirting with trendline resistance, as well as sellers showing interest from daily supply at 1.3622/1.3467, communicates a bearish vibe back towards daily demand at 1.2645/1.2773. 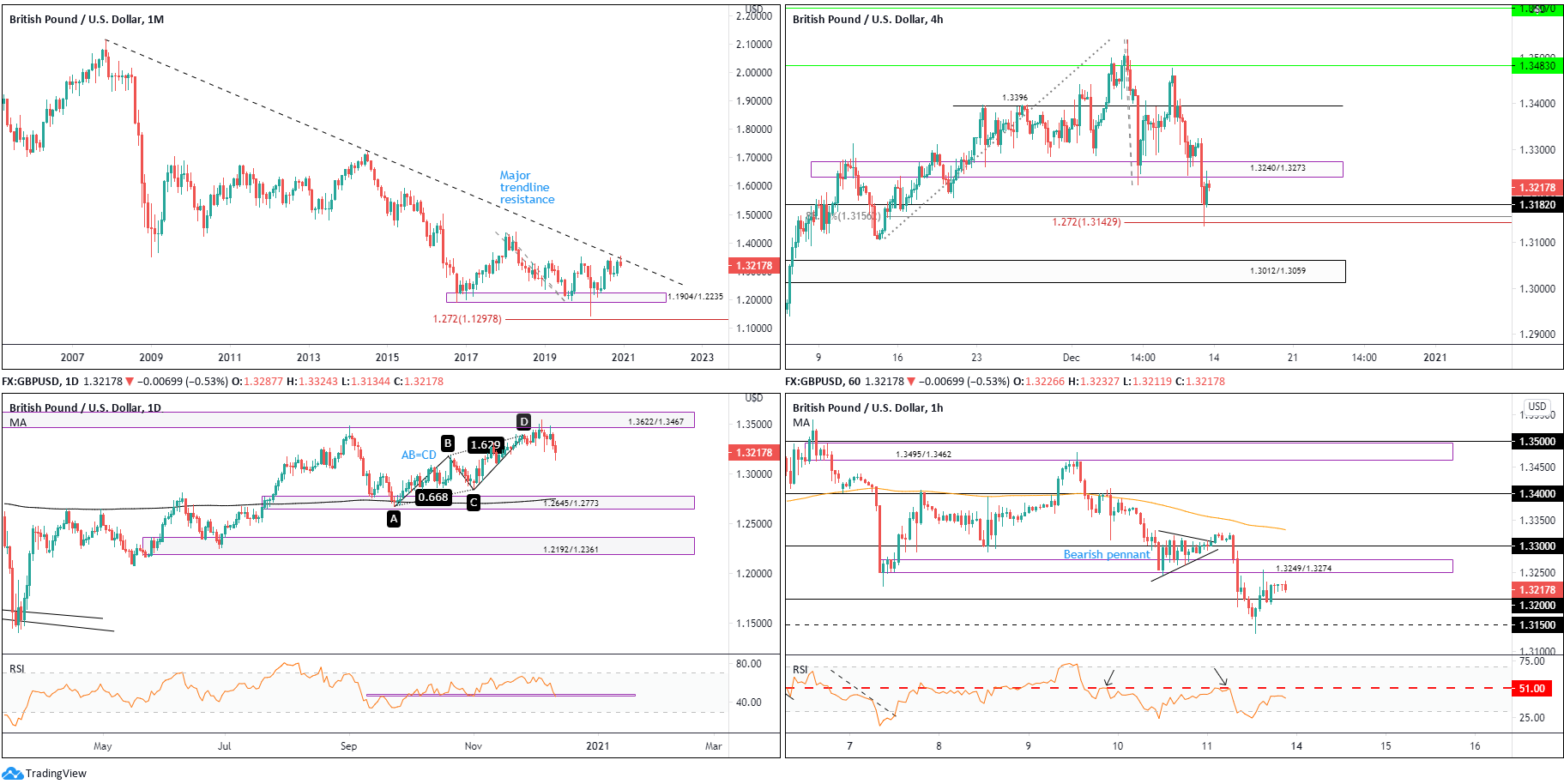