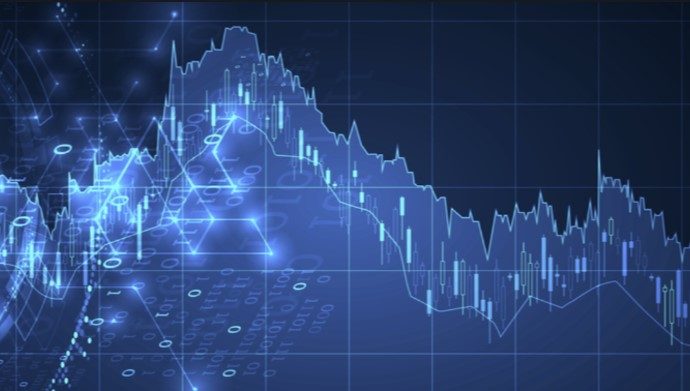 Down 0.8 percent last week, the US dollar (DXY) extended losses south of 94.65 daily resistance (March 9 low), a level benefitting from additional resistance by way of a daily trendline formation (102.99) and hidden RSI bearish divergence. As you can see, going into the close this landed things at daily demand from 92.71/93.14 (a drop-base-rally formation).

Entrenched within a large-scale pullback since March 2008 from 70.70 (primary trend is considered south – check the monthly timeframe), and the daily timeframe’s immediate trend rotating lower since March 2020 suggests bears may be looking to secure lower levels going forward. This – coupled with the RSI squeezing below 50.00 on the daily timeframe – places a question mark on current daily demand, as well as nearby daily support at 92.26.

After a fleeting advance north of support at 1.1553 and a subsequent period of inactivity around 1.1750, GBP/USD chalked up an animated bullish candle Friday with enough force to test supply at 1.1872/1.1818, a rally-base-drop configuration.

The trend on the daily timeframe has displayed a bullish vibe since March, and the RSI oscillator recently took over trendline resistance to trade at 57.00. Together, these two factors may weaken the appeal of 1.1872/1.1818 supply and shine light on another supply coming in from 1.2012/1.1937 this week.

Fed by a waning US dollar and technical follow-through buying off channel support (1.1684), upside gained momentum on Friday and joined hands with channel resistance (1.1769). The latter closely shares space with supply at 1.1872/1.1838 (fits within daily supply at 1.1872/1.1818), a rally-base-drop formation, which is also joined by a collection of Fib levels.

Additional bullish sentiment this week, on the other hand, may have buyers embrace another supply at 1.1928/1.1902 (prior demand).

Thanks to Friday’s spirited advance, a three-drive bearish pattern is nearing completion around the 127.2% Fib ext. level at 1.1836. Located just under 1.1850 resistance (and the RSI climbing to relatively extreme overbought levels), this combination, along with H4 supply at 1.1872/1.1838 in addition to daily supply from 1.1872/1.1818, offers interesting confluence to work with this week.

The H1 three-drive bearish pattern around the 127.2% Fib ext. level at 1.1836 and neighbouring resistances/supply from the H1, H4 and daily timeframes could prove a tough nut to crack for buyers. Consequently, bearish signals formed around 1.1850/1.1836 this week should not surprise.

Three successive daily bullish candles, with Friday scoring 1 percent, positions a rally-base-drop supply formation at 0.7345/0.7287 in plain sight this week, shaded closely by another area of supply at 0.7453/0.7384.

Before reaching the aforesaid H4 supply, though, a 0.7208 support retest is in the offing, movement that may appeal to buyers.

As far as the RSI oscillator goes, we’re currently marching through overbought terrain, encased within a rising channel.

While monthly structure reveals buyers are likely to eventually reach higher, the combination of daily supply at 0.7345/0.7287 and H4 Supply at 0.7234/0.7286 may interest sellers this week. Harmonic traders could also make a show in view of the H4 ABCD bearish pattern around 0.7296.

Owing to the above, traders are likely expecting buyers to enter the frame in early trade this week, with the possibility of stumbling around the 0.73 level, which could see market participants adopt an intraday bearish stance. 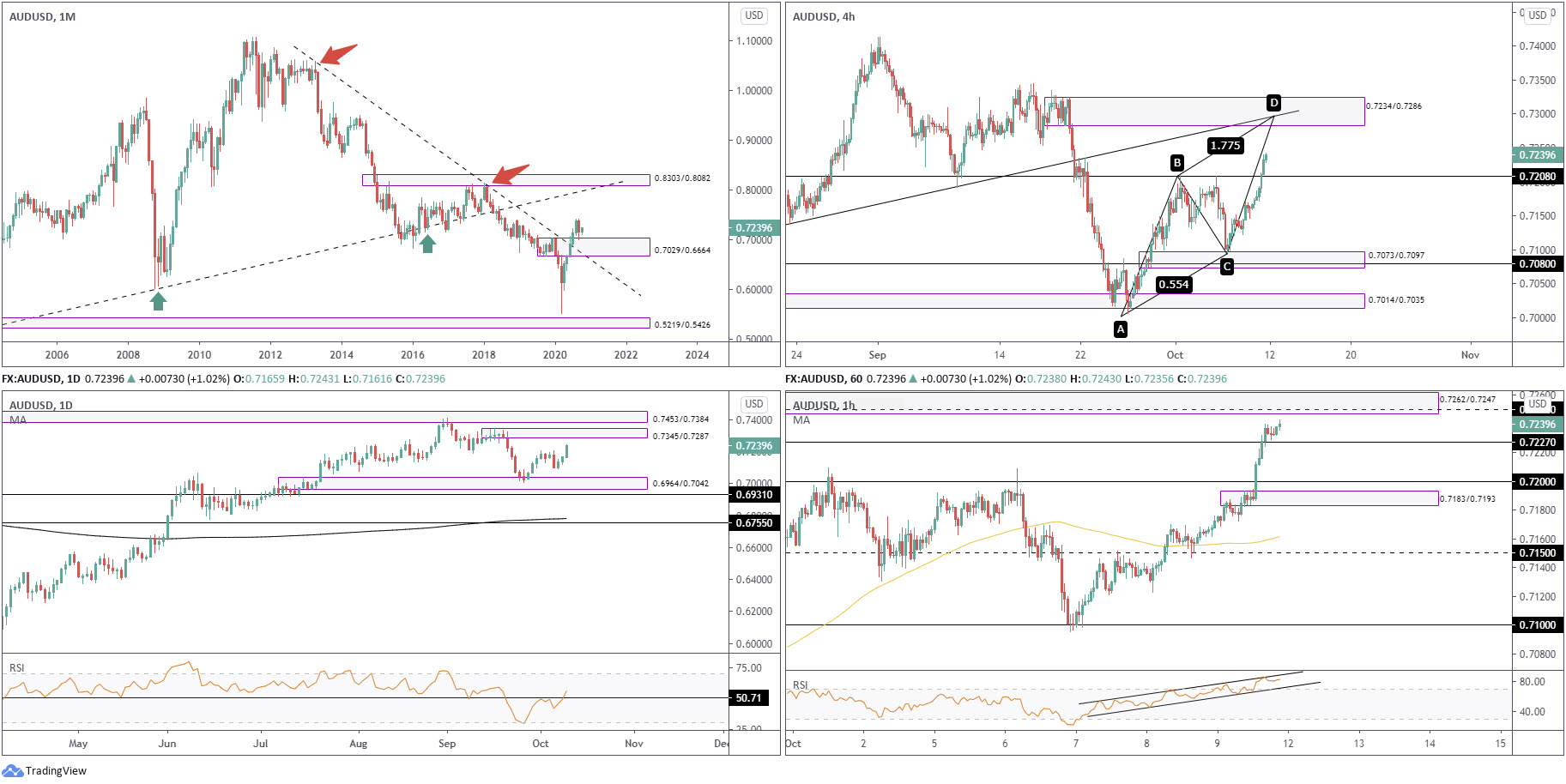 September, as you can see, tested the lower boundary of the aforesaid pattern and ended the month modestly off worst levels, with October now emphasising a hesitant phase.

Since recovering from monthly support at 104.62 (the lower boundary of the monthly descending triangle), action on the daily timeframe has been testing the mettle of daily supply at 106.33/105.78. Potentially encouraged by the RSI oscillator defending resistance at 57.00, Friday, as you can see, finished at session lows.

While the aforesaid demand remains active, downside risks are building given the uninspiring effort out of the zone Friday. Dipping a toe under the demand this week echoes a bearish vibe, with scope to approach demand at 104.92/105.09.

Friday’s sell-off, based on the H1 chart, led the candles through demand at 105.71/105.77, which shortly after welcomed a retest to continue south. Downside momentum also guided the RSI value into oversold waters.

Supports in view today fall in at the 105.50 region, closely fixed by a trendline support (prior resistance – 105.80) and a 61.8% Fib level at 105.38 (green circle). Passing through the aforesaid areas this week could see sellers make their way towards the 105 level.

Monthly support at 104.62 (lower base of the monthly descending triangle) remains a key zone on the bigger picture. In order for buyers to make a stand, nevertheless, supply at 106.33/105.78 on the daily timeframe must be addressed.

Leaving trendline resistance taken from 2.1161 unopposed, the month of September sunk 3.4 percent by way of a bearish outside reversal candle. This advertises a potential trendline support (prior resistance – 1.7191) retest.

Friday’s extension to the upside, marking a third successive daily gain for the pair, argues that resistance at 1.3201 is now in the line of fire this week. Furthermore, RSI followers will note the value recently climbed above 55.00 resistance.

Demand at 1.2836/1.2881 (a drop-base-rally formation) received price action on Wednesday, by way of back-to-back hammer candle patterns. Both Thursday and Friday held a bullish tone and strong-armed price action into supply from 1.3055/1.3018. A break of here, nevertheless, shines light on another supply at 1.3116/1.3160 (prior demand).

Friday’s heavy bid, following a retest at the 100-period simple moving average, witnessed a series of H1 bullish candles take on the widely watched 1.30 level, a trendline resistance (1.2687) and another neighbouring resistance at 1.3023. This also propelled the RSI value to overbought levels not seen since late September.

According to the H1 chart, intraday traders are likely anticipating further upside early week, with 1.31 targeted. A 1.30/1.3023 retest could also be something we see unfold.

Although monthly price echoes the prospect of downside, the daily candles exhibit room to reach for resistance at 1.3201.