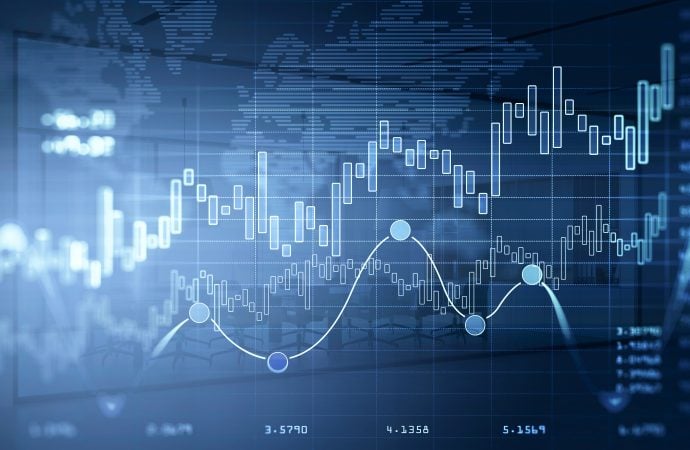 Enclosed within the prior week’s range (94.50-93.21), dollar activity echoed a softened tone last week and carved out what many candlestick enthusiasts refer to as an indecision candle.

The US dollar index—a geometric weighted average of the greenback’s value against a basket of six international currencies—remains hovering beneath one-year pinnacles at 94.50.

Technically, price action is sandwiched between support from 93.90 and resistance around 94.45. Note the former is a previous Quasimodo resistance, closely shadowed by a decision point at 92.71-93.53 and trendline support, extended from the low 89.84. The latter resistance, on the other hand, represents a 38.2% Fibonacci retracement and a 1.272% Fibonacci projection, and commands space south of neighbouring resistance at 94.65.

With reference to trend, the index has established a series of higher highs and higher lows since price made contact with support from 89.69 mid-May. Under these circumstances, coupled with current support, further USD buying could be in the offing.

The euro shed 0.2 percent against its US counterpart last week, recording a fifth consecutive losing session and dipping a toe in prime support at $1.1473-1.1583. Additional selling—action breaching current support—exposes a 61.8% Fibonacci retracement at $1.1281, organised above a 1.618% Fibonacci projection from $1.1228.

Long-term sell-stops tripped beneath late September lows at $1.1612 (2020) could fuel buyer interest. At the same time, though, trend studies show the break of $1.1612 is perhaps the early phase of a trend change to the downside.

Fibonacci support between $1.1420 and $1.1522 remains in the open this week, fastened to the lower side of the weekly timeframe’s prime support.

In terms of the relative strength index (RSI), the indicator is in the early stages of establishing what’s referred to as hidden bullish divergence, sited around oversold territory.

Channel support, drawn from the low $1.1770, entered the frame Wednesday and presented a floor for buyers to work with. Albeit a hesitant showing around Quasimodo support-turned resistance at $1.1563, Friday eventually overthrew the base, action exposing neighbouring channel resistance, pencilled in from the high $1.1846, and resistance at $1.1622.

Medium-term sentiment has faced southbound since June; therefore, sellers may still have the upper hand in this market this week, despite the resistance breach.

Fibonacci fans will note a Fibonacci cluster formed between $1.1585 and $1.1581, making its way into the spotlight after Friday’s US labour report. This follows Wednesday tentatively defending support, made up of a 1.272% projection at $1.1535 and a 1.618% Fibonacci expansion at 1.1541—joined by H4 channel support highlighted above.

Territory above the aforementioned Fibonacci cluster points to another Fibonacci environment around $1.1596, set below $1.16 and nearby Quasimodo resistance at $1.1605. Technicians may also acknowledge the H4 timeframe’s channel resistance converges closely with the $1.16 region.

While signs of buying interest is evident out of weekly prime support at $1.1473-1.1583, tunnelling further into the aforesaid area is a possibility due to daily Fibonacci support calling for attention between $1.1420 and $1.1522.

Room to move higher on the H4 indicates the H1 timeframe’s Fibonacci cluster between $1.1585 and $1.1581 is fragile, leaning towards a test of $1.16, which conveniently aligns with H4 channel resistance. It is, therefore, between channel resistance and H4 resistance at $1.1622, charts studies suggest sellers could make a show, in line with the daily timeframe showing space to drop lower and test $1.1420-1.1522.

Trend studies on the weekly scale show we’ve been higher since early 2020. Consequently, any decisive response from $0.6968-0.7242 might be the start of a dip-buying attempt to join the current trend.

Latest out of the relative strength index (RSI) reveals the value journeyed above the 50.00 centreline, informing traders that average gains exceed average losses: momentum is to the upside.

Resistance at $0.7317, serving as a cap on price since mid-September, arrived back on the scene at the tail end of the week. Sellers were uncertain going into the close, placing a question mark on the level and throwing light on Quasimodo resistance at $0.7394 this week. Helping build $0.7394 as a candidate for resistance, a 1.618% Fibonacci expansion at $0.7386 and a 1.272% Fibonacci projection at $0.7398 enclose the level.

Should sellers regain consciousness, nonetheless, support at $0.7223 is seen.

Scope to climb higher on the daily timeframe, in addition to buyers warming to the weekly timeframe’s prime support at $0.6968-0.7242, underlines a bullish theme in this market.

In light of the bigger picture, H4 resistance at $0.7317 is perhaps on shaky ground.

This places $0.73 in favourable light on the H1 this week, with any upside to look at taking on H1 Quasimodo resistance at $0.7339. Alternatively, if buyers fail to accept $0.73, H1 trendline support, etched from the low $0.7170, is an area buyers might make a show from.

Supply at ¥113.81-112.22 put in an appearance as price submerged the prior week’s shooting star candlestick formation. Having observed the said supply cap upside since April 2019, the odds of a bearish attempt materialising is high.

While having two supply areas unite increases the chances of a bearish outcome this week, a dense Fibonacci cluster resides above the daily zone between ¥113.00 and ¥112.85. This 15-pip resistance, therefore, may invite a whipsaw above daily supply—movement tripping buy-stops and potentially fuelling bearish interest.

From the relative strength index (RSI), following support emerging from 56.85 early last week, the indicator’s value is within reach of overbought space. However, with the trend clearly facing northbound this year, overbought signals should be viewed in this context.

The US dollar fell sharply against the Japanese yen, following Friday’s ‘headline weakness’ labour data out of the US. Downside, however, was short-lived. Crafting lows (¥111.51) ahead of channel support, taken from the low ¥110.83, US hours scaled to fresh highs, dethroning the ¥112 figure and shaking hands with channel resistance around ¥112.21 (drawn from the high ¥111.79). It’s worth noting the aforementioned resistance intersects with H4 resistance at ¥112.25, therefore a retracement to test ¥112 should not surprise.

Weekly supply at ¥113.81-112.22 and daily supply from ¥112.66-112.07 highlight a potential bearish phase. Though, whipsawing above daily supply to draw in additional sellers from the daily timeframe’s Fibonacci cluster between ¥113.00 and ¥112.85 is also a plausible setup to have noted this week.

Trend direction is north, both on the H1 and H4 timeframes, as well as the daily scale.

Supply-turned demand at $1.3629-1.3456 continues to emphasise a distressed atmosphere after having its lower limits clipped at the end of September. In spite of recovery attempts this week, snapping a four-week losing streak, it’s important to note price also closed below a double-top pattern’s ($1.4241) neckline at $1.3669, which signals bears are looking to take charge.

The double-top pattern’s profit objective—measured by taking the distance between the highest peak to the neckline and extending this value lower from the neckline—sits around $1.3093. Conservative pattern sellers are likely to pursue a candle close beneath $1.3629-1.3456 before pulling the trigger.

Respecting the aforementioned decision point helps confirm bearish intent within the weekly timeframe’s supply-turned demand at $1.3629-1.3456, and reinforces the idea of a successful double-top pattern.

Momentum studies, according to the relative strength index (RSI), shows momentum has been to the upside since connecting with oversold at the end of September. The 50.00 centreline is a key watch and could form resistance, aiding a bearish picture from the decision point underlined above at $1.3736-1.3659.

The combination of ascending resistance, projected from the low $1.3572, and resistance coming in from $1.3640, withstood two upside challenges last week. Equally impressive was support at $1.3570 and intersecting trendline resistance-turned support (taken from the high $1.3913) capping sellers during mid-week movement.

Outside of the aforesaid areas, resistance can be seen at $1.3750-1.3721, set just beneath a 100% Fibonacci projection at $1.3784. To the downside, the noted trendline resistance-turned support could offer a floor once again if tested.

Friday’s lower-than-expected US non-farm payrolls print provided a short burst of fresh impetus to EUR/USD, elevating the currency pair to resistance at $1.3658, joined by a 50.00% retracement at $1.3662 and a 78.6% Fibonacci retracement at $1.3661. As you can see, sellers made their presence felt, pulling GBP/USD back to within close range of $1.36.

Long term, as noted in previous writing, sterling appears to favour lower price levels. The daily timeframe’s decision point at $1.3736-1.3659 remains a key base this week.

As expected, the lower limit of the daily timeframe’s decision point at $1.3659, combined with H4 resistance at $1.3640, H4 ascending resistance, as well as H1 resistance thrown in the mix at $1.3658, offered sellers a ceiling to work with last week.

With consumed demand visible sub $1.36 on the H1, and taking on board the bearish picture across all timeframes right now, a break of $1.36 is in the offing, targeting at least H1 trendline support, taken from the low $1.3415.