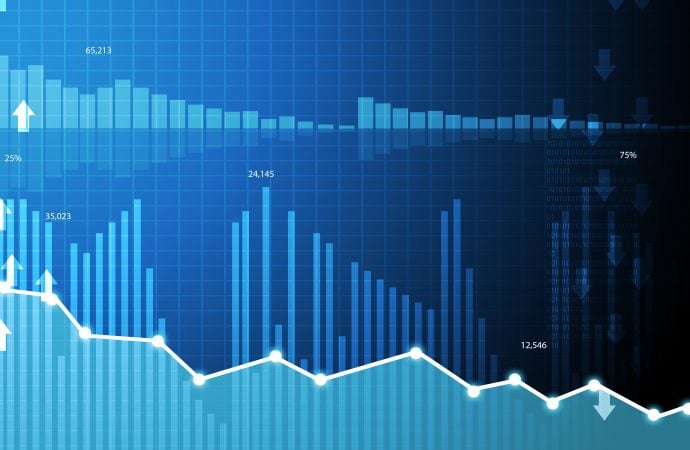 Additional technical observations on the daily chart reveal the RSI indicator pierced the upper side of a declining wedge early December, delivering an early cue the price-based declining wedge (between 94.30/92.18) was likely to follow suit. RSI trendline resistance recently made an entrance, with a break unmasking the declining wedge pattern’s target (black arrows) at around 53.26.

Two weeks following the RSI pattern breach, as you can see, price action punctured the upper side of its declining wedge and arranged a pattern target of around 92.76 (green boxes). Additional resistance to take into consideration this week, however, are 91.00 and 92.26.

As indicated in previous writing, the market’s overall trend exhibits a bearish outlook on the monthly chart, entrenched within a bulky pullback since May of 2008 (major swings). Since 2016, however, resistance developed around 103.00, causing the daily timeframe to launch a series of lower lows and highs in 2020. Should price submerge the 88.25 February 16 low, this may help further validate the current bearish narrative.

Trend on this timeframe remains decisively north, establishing a series of higher highs and higher lows since March 2020 (some will consider this a secondary trend).

In terms of the RSI indicator, following the formation of bearish divergence, the value is seen fast approaching the upper side of 50.00.

From the March 2018 supply at 1.2385/1.2346, mid-week witnessed sellers make a show and eventually bring down trendline support (1.1602). After retesting the lower side of the aforesaid trendline (common viewing after a trendline breach), Friday slipped to a 1.2193 low.

Heading into Friday’s US session, H1 sellers greeted the lower side of the 100-period simple moving average at 1.2283. This directed moves beneath 1.2250 support to the 1.22 level.

While an end-of-day rebound from 1.22 emerged, resistance at 1.2235 poses a potential problem for buyers, as may 1.2250 resistance. Downstream, south of 1.22, demand appears vacant until around the 1.21 vicinity.

RSI enthusiasts may acknowledge the indicator dipped a toe in oversold territory in the latter part of the week, and is in the process of chalking up a triple-bottom pattern (neckline can be found at 53.94 [black arrow]).

Monthly price is poised to reach for higher levels, though a 1.2095 support retest on the daily timeframe may unfold beforehand.

H4 support at 1.2164 (and associated Fib levels) is likely to make an entrance early this week. Though given the daily timeframe suggesting a 1.2095 test, this implies upside attempts off 1.2164 could be fragile.

Therefore, another possible scenario to be watchful of this week is a H1 close under 1.22, which might be viewed as a bearish cue, with 1.21 ultimately targeted (set just ahead of 1.2095 daily support).

Wrapping up 2020 in positive territory, following a pivotal rebound from demand at 0.7029/0.6664 (prior supply), buyers, according to the monthly chart, appear free to explore as far north as 0.8303/0.8082 in the coming months, a supply zone aligning closely with trendline resistance (prior support – 0.4776).

Unable to extend recent recovery gains north of support at 0.7647, AUD/USD watched price consolidate gains ahead of 2021 peaks into the latter half of last week (Friday generated an indecision doji candle).

In conjunction with the prevailing uptrend (since March 2020), and monthly price taking aim at higher pinnacles, this throws a light on supply at 0.7937/0.7890 this week. However, a retest at 0.7647 could also take shape.

Momentum, as measured by the RSI oscillator, recently produced bearish divergence within the parapets of the overbought area.

0.7805 resistance, as you can see, withstood a mid-week attempt to renew 2021 highs, with price shortly after receiving trendline support (0.7461) and Friday producing a hammer candle pattern.

Demand at 0.7721/0.7731, an important zone given it was likely within this area a decision formed to refresh highs and take out remaining offers around 0.7740 and 0.7742, capped downside into the second half of last week.

Friday, as you can see, watched AUD/USD climb 0.7750 resistance and the 100-period simple moving average, hinting at a move back to 0.78.

As far as the RSI indicator goes, the value closed the week out just ahead of 50.00. Breaking this figure is likely to see momentum increase to the upper side of channel resistance around 62.64.

However, a 0.7647 support retest could arise on the daily chart before buyers come forward (if at all).

H4 testing trendline support and forming a hammer candle, with room to pursue 0.7805 resistance, suggests H1 candles may remain above 0.7750 in early trading in favour of reaching 0.78. Consequently, a 0.7750 retest could be interesting today.

Momentum diminished considerably Friday after price joined hands with an area of resistance composed of Fib levels around 104.00, sheltered just under a resistance barrier at 104.16.

Short-term action on Friday watched USD/JPY spike through 104 on three occasions, each time testing supply at 104.13/104.06.

Apart from Friday’s NFP-induced low at 103.60, 103.50 support is in the light if sellers continue defending the 104 neighbourhood.

The picture coming out of the RSI indicator right now shows 44.40 support welcomed the value Friday, lifting above 50.00 by the close.

Higher timeframe action proposes a move to the lower side of the monthly descending triangle pattern at 104.62 this week, aligning with daily trendline resistance.

H4 resistance between 104.16/104.00 delivers reasonably appealing confluence to work with. However, the fact sellers were unable to maintain a bearish stance Friday, and with the higher timeframes eyeballing 104.62 resistance, this could stir a breakout higher. A short-term bullish scene may arise as a result, with buyers also likely watching for a 104 (support) retest to form.

As for resistance, the H4 level at 104.76 may generate interest should the market breakout higher. This level shares space with the monthly 104.62 level and daily trendline resistance.

Yet, through the simple lens of a technical trader, buyers appear to be losing grip. The initial reaction (black arrow) achieved modest highs at 1.3671, though subsequent reactions failed to challenge said peaks, implying sellers possibly have the upper hand here.

1.3550 support has proven an effective base, though like the H4 demand underlined above at 1.3527/1.3556, appears to be hanging by a thread. This is particularly evident having seen buyers failed to topple 1.36 resistance and neighbouring 100-period simple moving average on numerous occasions.

The break of long-term trendline resistance on the monthly timeframe has likely caught the eye of long-term buyers. From the daily chart, upside hurdles stand out at 1.3755 resistance and supply from 1.3996/1.3918.

Shorter term technical levels hint at possible weakness, with moves below 1.3550 support a likelihood on the H1 this week. By extension, this could see a breach of H4 demand at 1.3527/1.3556 and at least a follow-through move to 1.35 support on the H1.