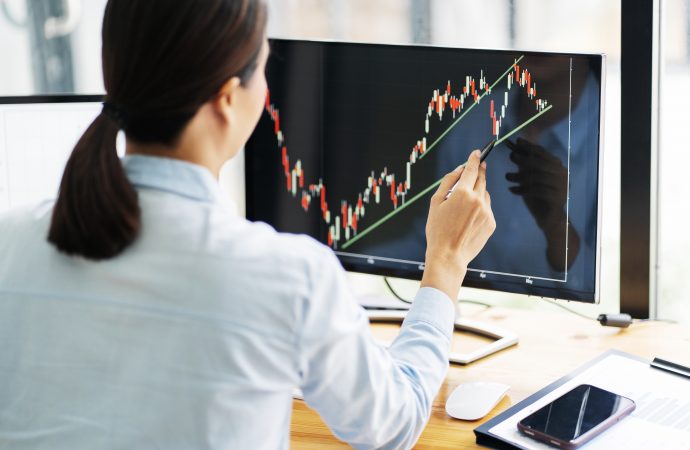 According to the US dollar index, the US dollar finished the first full week of 2022 considerably off best levels. This follows two successive bearish weeks heading into the close of 2021.

Support at 95.86—boasting strong historical significance—served immediate flow well since mid-November 2021. What’s also technically pertinent is current price action forming either an ascending triangle or flag pattern on top of support, both of which echo a bullish ‘flavour’. A breakout to the upside has Quasimodo resistance to target at 97.45, followed by the ascending triangle’s profit objective at 98.29 (red boxes). Alternatively, 95.86 support giving way unchains the door to a decision point from 94.96-95.26 and a trendline support, extended from the low 89.84.

Underpinning 95.86 and the aforementioned pattern structure is trend direction and the relative strength index (RSI).

In terms of trend, the weekly timeframe shows an indecisive market since 2015, ranging between 103.82 and 88.25. The daily timeframe, however, displays an upside bias, established through a series of higher highs and higher lows since price made contact with support from 89.69 in May 2021. The RSI is seen shaking hands with support between 40.00 and 50.00. Note that within trending environments, the indicator tends to construct a ‘temporary’ oversold area around 50.00 and by extension offers a clear area of indicator support.

Quasimodo support drawn from mid-June at $1.1213 (positioned beneath the weekly timeframe’s Fibonacci structure) made an entrance on 24th November (2021) and remains committed. Trendline resistance, extended from the high $1.2254, is nearby and could be tested this week, should bulls maintain Friday’s course.

Key levels to be mindful of on the H4 scale this week are:

Following Friday’s US non-farm payrolls, EUR/USD bulls strengthened their grip and bid $1.13. Subsequent flow elevated the currency pair beyond the walls of supply from $1.1350-1.1341 and exposed H4 resistance underlined above at $1.1379. This level is accompanied by a 1.272% Fibonacci projection on the H1 chart and an ascending resistance, taken from the low $1.1274.

The 1.272% represents what some Harmonic traders will refer to as an ‘alternate’ AB=CD formation. Unlike equivalent AB=CD patterns (equal AB and CD-legs), an alternate variation has an extended D-leg, extended to either 1.272% or 1.618%.

The relative strength index (RSI) recorded overbought conditions ahead of the week’s end, casting light on indicator resistance at 82.37. Although the overbought space between 100 and 70.00 indicates upside momentum could level off, the indicator might remain around overbought until touching H4 resistance at $1.1379.

Weekly Fibonacci support between $1.1237 and $1.1281 interacting with price may be enough to pull daily action to trendline resistance this week, extended from the high $1.2254.

In view of the daily timeframe trending lower since June 2021, traders are urged to pencil in the possibility of a bearish attempt from the noted trendline resistance.

Since mid-Feb 2021, a downside bias has been seen. This follows higher prices since pandemic lows of $0.5506 (March 2020). However, from the monthly timeframe the unit has been entrenched within a large-scale downtrend from mid-2011.

Support at $0.7021 calls for attention to the downside in the event sellers track lower price levels this week.

The relative strength index (RSI) elbowed beneath the 50.00 centreline at the tail end of the week, movement informing traders and investors this market is beginning to produce negative momentum (average losses exceeding average gains).

In fact, the point at which trendline resistance and the 61.8% Fibonacci retracement merge could be an area the chart attracts bearish attention (red zone).

Upstream, the technical radar points to a Quasimodo support-turned resistance at $0.7229. Interestingly, this level dovetails closely with the H4 61.8% Fibonacci retracement at $0.7222.

Technically, we are in a prime support zone on the weekly timeframe at $0.6968-0.7242, unlocking the possibility of a run higher on the daily chart until crossing swords with resistance around the $0.7340ish point (see above). It is here, in light of the downtrend seen on the daily scale and the long-term downtrend on the monthly timeframe, long-term sellers could emerge.

The combination of H4 resistance at $0.7187 and H1 supply at $0.7195-0.7207 (and associated H1 technical confluence) delivers immediate short-term confluence to work with early week.

A touch higher, technical eyes will be on H1 Quasimodo support-turned resistance at $0.7229, which, as noted above, overlaps closely with H4 resistance around $0.7222 (red area).

USD/JPY kicked off 2022 touching gloves with a 1.272% Fibonacci projection from ¥116.09, following a one-sided break of resistance from ¥114.38, a level capping upside since early 2017 which now represents support. Also of technical note is the currency pair recently refreshing multi-year pinnacles, reaching levels not seen since January 2017.

Quasimodo resistance at ¥116.33 made a show early last week, powering three back-to-back daily bearish closes. Taking the market’s current trend into account, the ¥116.33 reaction may prompt a dip-buying phase from ¥114.97 this week, a Quasimodo resistance-turned support.

RSI (relative strength index) analysis had the indicator exit overbought space in recent trading. This is generally considered a bearish signal, and could lead to the value extending lower to connect with support between 40.00 and 50.00. On a related note, a ‘temporary’ oversold range can often be seen around the 50.00 neighbourhood in defined uptrends (since 10th May 40.00-50.00 has offered an oversold region on this timeframe).

H4 dipped a toe south of trendline support, drawn from the low $113.14, indicating further underperformance in the direction of support coming in at ¥115.38 in early trading this week. Should the pair continue to pursue lower territory, additional support is not visible until ¥114.50, arranged a handful of pips beneath the daily timeframe’s Quasimodo resistance-turned support at ¥114.97.

In line with the underlying trend of this market, if price eventually dethrones the daily Quasimodo resistance at ¥116.33, $117.76-117.07 supply (H4) is fixed above the daily level (not visible on the screen); therefore, a break of ¥116.33 shows room to press higher.

Local lows around ¥115.63 were absorbed during US trading on Friday, unshackling a shift to Quasimodo resistance-turned support at ¥115.48 and a Fibonacci cluster between ¥115.45 and ¥115.51. Bracing this area is neighbouring support on the H4 timeframe at ¥115.38. Further technical confluence arises from the relative strength index (RSI) probing oversold space into the close.

Failure to offer a ‘floor’ early week around ¥115.48, this invites additional underperformance towards the ¥115 psychological figure, a level benefitting from a daily Quasimodo resistance-turned support at ¥114.97.

On the one hand, the USD/JPY is entrenched within an uptrend for now, clearly realised on both weekly and daily timeframes. Against this background, nevertheless, weekly resistance at ¥116.09 (the 1.272% Fibonacci projection) and daily Quasimodo resistance at ¥116.33 is likely to remain a talking point, particularly for bullish setups, long term.

Resistance at $1.3629-1.3456 made a show in recent weeks, following a pullback from December lows of $1.3160 just ahead of the double-top pattern’s ($1.4241) profit objective around $1.3093 (red boxes). Could this be the beginning of a dip-buying phase, in line with the weekly timeframe’s current uptrend? Still, it’s important to recognise that while the trend on the weekly timeframe demonstrates an upside bias, the monthly timeframe’s long-term trend has been lower since late 2007.

Trendline resistance, taken from the high $1.4250, came under modest pressure Friday and landed price within a stone’s throw of neighbouring resistance from $1.3602. Both technical structures remain a possible headwind for GBP/USD this week.

The 200-day simple moving average is circling above current resistance at $1.3736. If this dynamic value is eventually challenged, note that moving averages (in particular the 200-day setting) can serve a support and resistances.

Interestingly, the relative strength index (RSI) is hovering nearby overbought levels and is in the early stages of hidden bearish divergence.

Quasimodo resistance at $1.3580 appears fragile, having failed to find acceptance beyond $1.3490 lows. Supply coming in at $1.3665-1.3625, therefore, is recognised as a viable upside objective this week, with subsequent buying perhaps reaching resistance at $1.3710.

Demand is equally important to note at $1.3428-1.3444, receiving price action at the beginning of last week as traders capitalised on ‘dip-buying’ movement. As a result, if sellers regain consciousness from $1.3580, the week may witness a dip back to the aforementioned demand zone.

Following Thursday’s response from demand at $1.3488-1.3503 (enclosing the $1.35 psychological figure and converging with trendline support, etched from the low $1.3173), buyers of GBP/USD were robust into the week’s close.

$1.36 is directly overhead and capable of producing resistance. In spite of this, the psychological figure is in a vulnerable position. Above, a Quasimodo support-turned resistance ($1.3627) is seen within the walls of H4 supply at $1.3665-1.3625, and could attract a whipsaw (stop run) above $1.36.

In terms of the relative strength index (RSI), overbought conditions were registered late in the session Friday which suggests sellers might take the wheel early trade this week.

Conservative traders will likely watch for a test of $1.3665-1.3625 and a subsequent close back under $1.36 to form before pulling the bearish trigger. A visible downside target from this region is H1 trendline resistance, coming from the low $1.3173.