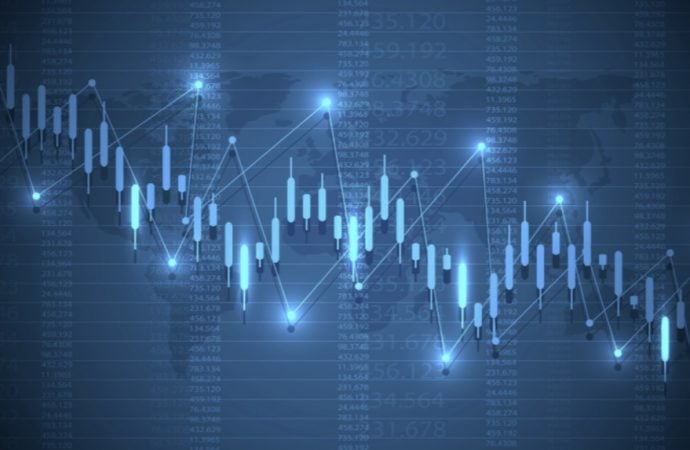 After scoring a 27-month low at 92.52 heading into the second half of the week, a strong-willed recovery emerged. Albeit inspiring, the US dollar index (DXY) still marginally closed in negative territory (-0.10 percent), recording a seventh successive weekly decline (falling more than 4 percent in July).

From a technical point of view, buyers and sellers continue to square off between 92.71, a daily bear flag (between 95.72/97.45) take-profit target (measured by calculating the preceding move and adding the value to the breakout point – purple), and neighbouring supply at 94.02/93.56.

Additional elements to consider monitoring this week are nearby support at 92.26 and resistance parked at 95.03. In terms of the 200-day simple moving average, currently circling 97.92, the dynamic value is curving to the downside after two years of mostly drifting higher. Indicator-based traders will also acknowledge the RSI oscillator recently exited oversold space, recovering from troughs as far south as 17.00.

Technically, it appears buyers are attempting to make a stand. Clearing supply at 94.02/93.56 adds weight to an upside move forming this week.

August, as you can see, currently trades cautiously, up by 0.07 percent.

Also worth pointing out, though, is the primary trend remains intact, emphasising a southerly trajectory since July 2008.

The ABCD bearish pattern at 1.1872, a simple harmonic configuration, is proving a tough nut to crack since price addressed the base at the end of July. Placed just ahead of supply at 1.2012/1.1937, Friday’s action delivered a muscular bearish candle, a move which snapped a three-day winning streak. An extension lower this week, assuming last Monday’s low at 1.1695 breaks down, has support at 1.1553 on the radar as the initial point of interest.

In reference to the RSI indicator, the value topped around 80.00 in recent action and finished the week departing from overbought territory.

The value of the euro fell sharply against the US dollar heading into US trade on Friday, following a brief rally in consideration of the US headline payrolls rise and unemployment rate both beating consensus.

The down move tumbled through the 100-period simple moving average and also the 1.18 level, crossing paths with demand at 1.1752/1.1775. The move also momentarily drove the RSI value into oversold terrain. The 1.17 level is likely to call for attention should the aforesaid demand give way; a break back above 1.18, nevertheless, has the 100-period simple moving average to contend with, as well as local trendline resistance (1.1916).

The monthly timeframe urges traders to consider the possibility of a long-term trend change after overrunning trendline resistance. Clearing monthly supply at 1.1857/1.1352 would help confirm this.

The daily ABCD bearish pattern at 1.1872, however, is seen hampering upside at the moment, as Friday witnessed strong selling emerge from the level.

Interestingly, the H4 trendline support (1.1254) is positioned just under H1 demand at 1.1752/1.1775. This could prompt an attack at the lower edge of the aforesaid demand this week, tripping sell-stops and filling H4 buyers to potentially explore higher levels.

Still, do bear in mind that daily sellers are active, although a move higher, based on the monthly timeframe, would not surprise.

This throws light on an approach forming towards support at 0.7067 this week.

Buyers, as you can see, attempted to establish a base off 0.72 early Friday, though follow-through buying lacked enthusiasm, unable to even reach supply at 0.7246/0.7227 (the H4 zone).

Decisively sailing through 0.72 as we moved into US trading, and defeating the 100-period simple moving average, led to 0.7150 support welcoming price action, a barrier that prompted a mild pullback into the close.

Monthly price sweeping through supply and associated trendline resistance has likely aroused interest from longer-term buyers. However, the fact we’re fading daily supply at 0.7264/0.7224 could lead to a 0.7067 support retest forming this week.

Rebounding from 0.7150 support on the H1, given H4 is close to connecting with demand at 0.7115/0.7144, could attract intraday buying strategies early trade. This is in line with monthly price forecasting higher levels. 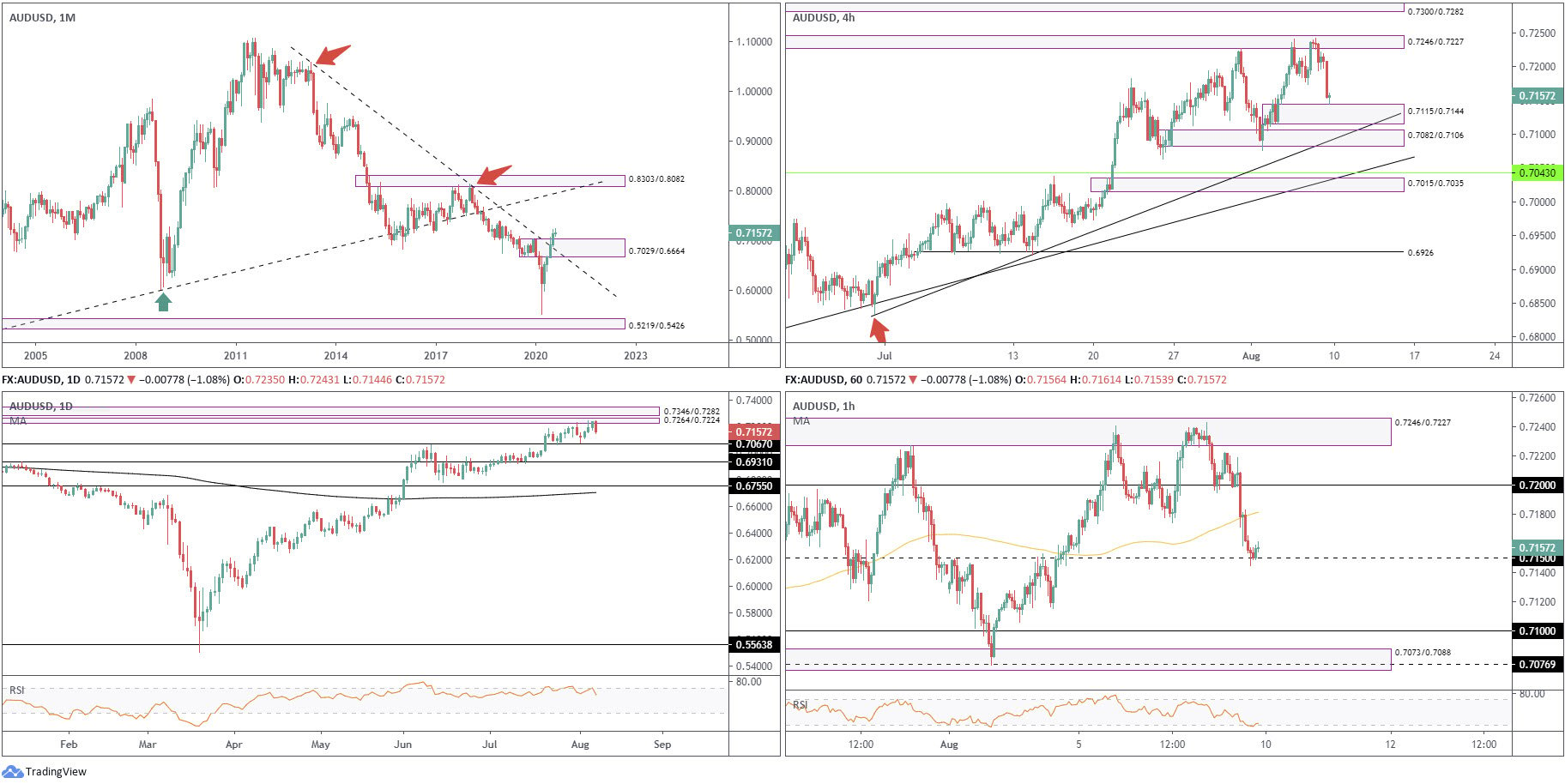 Having monthly support at 104.62 make a show, daily price spent the week engaging with supply from 105.70/106.66. Selling pressure, as you can see though, has so far been relatively uninspiring.

The RSI value remains under 50, albeit recently recovering from oversold ground.

Friday, following a brief NFP-induced flicker of activity, had buyers bounce back and strip 105.68, taking aim at resistance derived from the Andrew’s Pitchfork (107.54). Space beyond this line brings light to supply at 106.39/106.64 (previous demand).

The broad dollar bid Friday (DXY) tugged USD/JPY above the 100-period simple moving average and supply at 105.80/105.63, an area restraining upside since Wednesday.

The move greeted 106 (held strong into the day’s end) and drew the RSI value into overbought position. What’s appealing here, from a technical perspective, is the 106 level shares space with resistance derived from the Andrew’s Pitchfork (107.54) on the H4.

With monthly support at 104.62 making a show in recent days, coupled with a lack of selling interest seen from daily supply at 105.70/106.66, this implies a break higher could come to fruition this week.

GBP/USD finished higher by 5.5 percent in July, leading to long-term trendline resistance (1.7191) abandoning its position. The move follows support at 1.1904/1.2235 withstanding downside attempts during April and May.

After squeezing through the 200-day simple moving average, currently fluctuating around 1.2705, and toppling supply at 1.3021/1.2844, price action revisited the latter as a demand and fuelled modest upside into mid-week trading.

The RSI oscillator, for those following momentum indicators, will note the value exited overbought status Friday, after the week witnessed values as far north as 80.00.

In the early stages of London Friday, the value of the GBP/USD dipped through 1.31 and converging 100-period simple moving average, and retested the latter levels as resistance heading into the US session.

This led to a vigorous push through 1.3050 support to lows ahead of the widely watched figure 1.30, joined by demand coming in from 1.2977/1.3000. This demand is considered significant on this timeframe, due to it being an area where a decision was made to break above 1.30.

In regards to the RSI oscillator, we recently connected with oversold levels and modestly rebounded to 36.00.

A moderately positive stance also took shape following a retest at daily demand from 1.3021/1.2844, though it appears buyers were recently chased off ahead of daily resistance at 1.3201, concluding the week retesting 1.3021/1.2844.