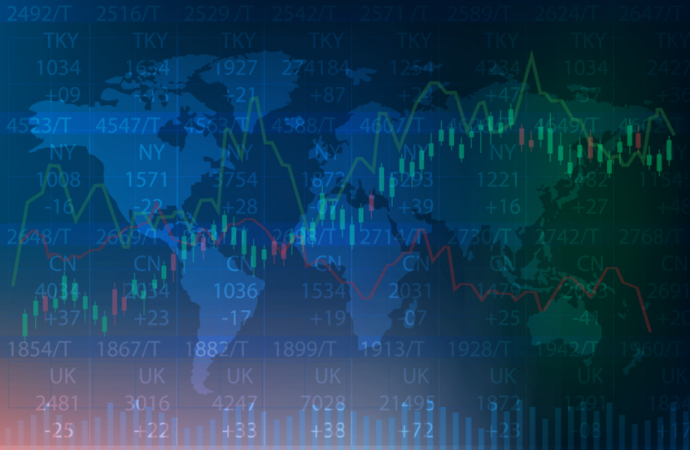 According to the US dollar index—a geometric weighted average of the buck’s value against six international currencies—the US dollar flexed its financial muscle last week and climbed 1.7 percent.

Clocking a high of 97.44, its highest peak since July 2020, the index came within a whisker of shaking hands with Quasimodo resistance from 97.45 on Friday before withdrawing into the close.

Support falls in close by at 96.89 this week (‘double-top peaks’ from 24th November and 15th December [2021]), and Quasimodo resistance-turned support from 96.40 calls for attention below. North of 97.45, however, throws channel resistance on the hit list, extended from the high 93.19, an ascending line dovetailing with a weekly trendline support-turned resistance, taken from the low 78.91.

Trend studies on the weekly timeframe shows an indecisive market since 2015, fluctuating between 103.82 and 88.25. The daily timeframe, though, has displayed an upside bias since price made contact with support from 89.69 in May (2021), shaped within the walls of an ascending channel, etched from 90.17 and 93.19.

From the relative strength index (RSI), the indicator wrapped up the week on the doorstep of overbought levels and threatens the possibility of bearish divergence. Support between 40.00 and 50.00 has been centre stage since August 2021, a common view within upward trending markets. Therefore, this is an area traders will likely continue to monitor going forward.

Europe’s single currency was hammered last week, dropping 1.7 percent on the back of a broadly stronger buck and a hawkish Fed.

Long-standing resistance at $1.1473-1.1583 (active S/R since late 2017) entertained a bearish showing early January; EUR/USD subsequently tumbled 3.0 percent, or 340 pips into the recent close. Territory below exhibits scope to fall as far south as Quasimodo support coming in at $1.0778.

In agreement with the weekly chart, Quasimodo support at $1.1213 relinquished position at the tail end of the week. Prime support serves as a downside objective at $1.0941-1.1000, price levels not seen since June 2020.

Momentum studies on this timeframe show the relative strength index (RSI) bound for oversold waters. Indicator support, therefore, could step into the fray at 21.87 sometime this week, a level in play since late 2016.

The decision point at $1.1114-1.1139 elbowed its way into the spotlight on Thursday, and preserved its position on Friday as the currency pair nursed the week’s losses on the back of moderate USD selling (DXY fading session highs of 97.44). Deserving attention are resistance at $1.1193 (stretched from June 2020) and a resistance zone plotted at $1.1205-1.1230.

A closer reading of price action on the H1 scale recognises $1.12 as possible resistance, arranged within the walls of a decision point from $1.1207-1.1194. It’s also worth noting that $1.11 remains a potential support to be mindful of this week.

Should we hold lows at $1.1138, a 100% Fibonacci projection at $1.1190 is on the radar, a ratio many will identify as an AB=CD bearish pattern. Additional Fibonacci confluence is offered by way of a 38.2% Fibonacci retracement at $1.1194. Both Fibonacci levels share space with the decision point.

Joining a $1.1207-1.1194 test may be the relative strength index (RSI) connecting with overbought levels; the indicator’s value finished the week around the lower side of the 50.00 centreline.

Higher timeframe flow demonstrates a soft market, favouring follow-through downside over the coming weeks. Prime support at $1.0941-1.1000 (daily), according to technical studies, stands in as a reasonable downside target on the bigger picture.

As a result, a pullback into the H1 area (or H4 resistance zone) could be seen and may draw a bearish scene early week.

Adding to the above, the trend on this scale, much like the weekly timeframe, is firmly to the downside right now.

The US Federal Reserve’s hawkish stance, alongside elevated US Treasury yields (particularly shorter-term maturities), a healthy USD and the key psychological figure $0.70 serving as resistance, weighed on upside attempts Friday.

The view out of the relative strength index (RSI) presents a consolidation between 40.00 and 23.00, set around oversold levels. Downward markets often positions the RSI at oversold space, and forms a range between 50.00 and 30.00ish levels. Consequently, traders entering long positions based on the RSI oversold area have likely ended the week in bad shape.

Daily support at $0.7021 stepping aside (marked resistance), together with weekly prime support at $0.6968-0.7242 on the brink of relinquishing position, echoes a bearish vibe this week until reaching daily Quasimodo support at $0.6896.

Alternatively, cracking through H1 support at $0.6965 opens the door for a short-term push towards the H4 timeframe’s 1.272% Fibonacci projection at $0.6948, closely followed by Quasimodo support priced in at $0.6926.

Despite a solid showing from sellers off the 1.272% Fibonacci projection from ¥116.09 at the beginning of the year, USD/JPY bulls reassumed control last week and added 1.4 percent.

Recent bidding is in keeping with the underlying trend on this timeframe: advancing since the beginning of 2021. Further buying on this scale, movement overtaking ¥116.09, may eventually underpin a move to channel resistance, extended from the high ¥110.97.

Against this backdrop, of course, channel support, taken from the low ¥102.59, might re-enter the frame should selling materialise.

Friday observed mild profit taking into the close, easing from session tops at ¥115.69. Support from ¥115.01 is in the neighbourhood, shadowed by a ¥114.48-114.78 decision point (an area established prior to the upside break of ¥115.01). Technicians will note the aforesaid support dovetails closely with the daily timeframe’s double-top pattern’s neckline at ¥115.06.

Overpowering Friday’s high, nevertheless, paves the way to daily Quasimodo resistance noted above at ¥116.33, given potentially ‘consumed supply’ between ¥115.68 and the daily level (blue arc).

Another technical observation worth noting is if price does indeed level off from current resistance, this could be interpreted as a right shoulder to a head and shoulder’s top pattern. Time will tell.

Scope to advance further on weekly (to the 1.272% Fibonacci projection from ¥116.09) and daily (to Quasimodo resistance at ¥116.33) timeframes, alongside the daily (double-bottom pattern) neckline breach at ¥115.06, portends a bullish situation this week.

Trend on this timeframe remains biased to the downside; the relative strength index (RSI) also nudging beneath the 50.00 centreline places a question mark on price support at $1.3355.

For those who read Friday’s technical briefing you will likely recall the following (italics):

With the above in mind, and price subsequently settling sub- $1.34 into the close and the relative strength index (RSI) failing to find acceptance above the 50.00 centreline (echoing resistance and negative momentum), the Quasimodo resistance-turned support may be targeted at $1.3333.

Daily support at $1.3355 is a key watch this week. While a floor may shape from here, traders are urged to pencil in the possibility of a breach, having noted January’s decisive sell-off.