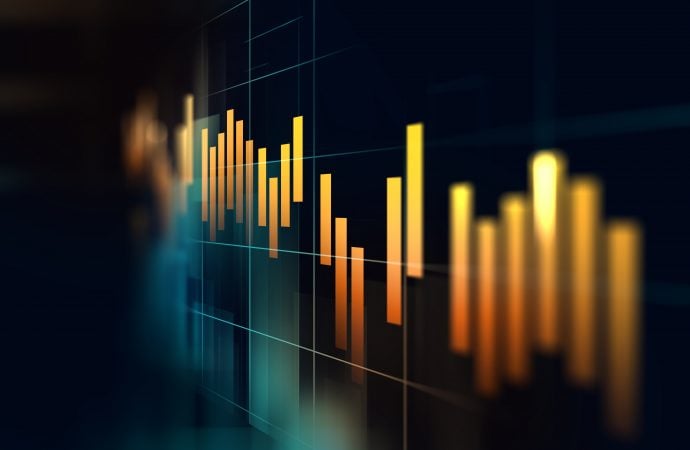 Despite hotter-than expected annual eurozone inflation, EUR/USD rotated southbound on Tuesday as higher US Treasury yields boosted the greenback’s appeal alongside safe-haven demand. Technically, sellers making a show should not surprise. In a market decisively trending lower since 2021, weekly Quasimodo support-turned resistance at $1.0778 was tested, a level closely sharing chart space with the daily ascending support-turned resistance, drawn from the low $1.0340.

As a result of weekly resistance entering the fight, and a clear long-term downtrend, bearish interest could emerge from the $1.0760ish neighbourhood (combination of H1 and H4 resistances).

The Australian dollar finished Tuesday considerably off worst levels against the US dollar, underpinned amid USD softness. This shifts interest to neighbouring Quasimodo support-turned resistance at $0.7245 on the daily scale—complemented by a 200-day simple moving average at $0.7257. Supporting a pop higher to the said daily resistance is the daily timeframe’s relative strength index (RSI), attempting to cement position north of its 50.00 centreline (positive momentum).

For those who read Monday’s weekly technical briefing may recall the following, covering weekly structure and long-term trend direction:

In similar fashion to Tuesday’s technical briefing, resistance is visible on the H4 scale between $0.7246 and $0.7217 (lower edge derived from a Fibonacci cluster), which houses daily resistance at $0.7245 within its upper limit.

Given the recent lacklustre performance, the short-term view remains unchanged:

Of technical relevance on the H1 chart, we can see the noted H4 resistance is nestled above $0.72, raising the prospects of a whipsaw (or ‘stop-run’) beyond the psychological figure. This, of course, is strengthened by the overall trend facing south and daily resistance plotted at $0.7245.

Despite registering a third consecutive weekly loss last week, forming a secondary correction within the primary uptrend (since the beginning of 2021), USD/JPY staged an impressive recovery Tuesday, adding 0.8 per cent and reclaiming the prior week’s losses. Weekly support from ¥125.54 remains unchallenged, opening the technical floor to revisit daily supply at ¥131.93-131.10. Reinforcing a bullish vibe is the daily relative strength index (RSI) making its way out of 40.00-50.00 support (an area representing an oversold zone since May 2021).

Potentially capping upside, however, is H4 Fibonacci resistance between ¥129.04 and ¥128.58. Though, traders are encouraged to pencil in H4 Quasimodo resistance at ¥129.67, should buyers retake control. Bolstering a bullish presence is H1 Quasimodo resistance-turned support from ¥128.48, with a successful retest shining light on ¥129.

In light of the overall technical picture pointing to the upside, ¥128.48 support on the H1 scale may invite additional buying to take on H4 Fibonacci resistance at ¥129.04-128.52.

Trading unchanged on the week (-0.05 per cent), weekly and daily technical structure remains unchanged as we step into Wednesday’s session:

Long term, this market has been entrenched within a strong primary downtrend since early 2021, emphasising weekly resistance at $1.2719 and daily Quasimodo support-turned resistance at $1.2762 as a possible ceiling. Interestingly, the daily timeframe’s relative strength index (RSI) is on the verge of finding grip above the 50.00 centreline: positive momentum.

Despite a momentary spike lower, resistance between $1.2686 and $1.2614 remains in play on the H4 scale, echoing weakness within the base. The H1 timeframe, on the other hand, observed an aggressive whipsaw through $1.26, action which came within striking distance of a H1 Quasimodo resistance-turned support level at $1.2554. Upstream displays resistance around $1.2660, with a break drawing attention to a H1 Quasimodo support-turned resistance base at $1.2695.

Similar to Tuesday’s analysis, knowing the higher timeframes demonstrates scope to reach at least $1.2719, together with a rather nasty $1.26 whipsaw on the H1 scale, suggests a push through H4 resistance at $1.2686-1.2614 is in the offing.

Bitcoin bulls remained in the driving seat on Tuesday, modestly extending Monday’s notable 7.7 per cent recovery north of familiar support at $28,849 on the daily scale. Expectations of meeting $36,361 and $34,048, both daily Quasimodo support-turned resistance barriers, is now firmly in the realm of possibility, according to current chart studies.

Spot gold welcomed sellers on Tuesday, drawing the yellow metal back to its 200-day simple moving average at $1,840.

Attention remains fixed on the daily timeframe’s harmonic Gartley pattern’s PRZ (Potential Reversal Zone) between $1,815 and $1,843. Complementing the PRZ is the 200-day simple moving average and a 61.8% Fibonacci retracement at $1,827. Upside price targets remain noted at $1,896 (38.2% Fibonacci retracement derived from legs A-D) and a $1,959-1,974 resistance zone. Meanwhile, the daily chart’s relative strength index (RSI) is hovering around the lower side of the 50.00 centreline. A break north demonstrates positive momentum and implies an optimistic tone for the noted Gartley pattern.

Recent technical research noted the following on the H1 scale:

As you can see, price is on the verge of dropping in on the said H1 supports, therefore these levels are likely to be on the watchlists of some technicians, as we move into Wednesday’s session.