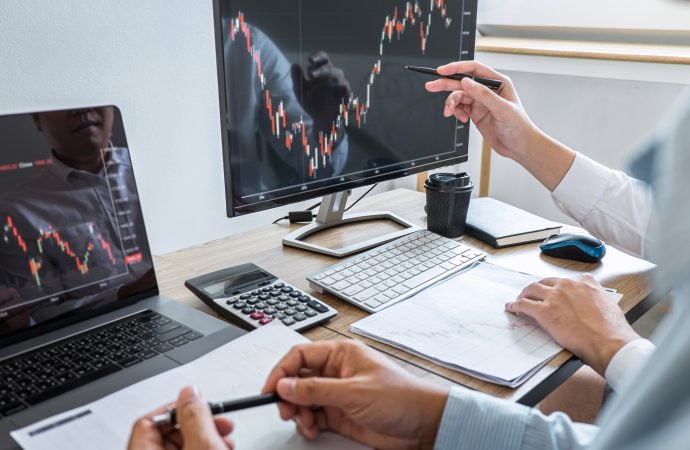 After refreshing a 24-month low, Europe’s shared currency recoiled from parity ($1.0000) against its US counterpart on Tuesday. EUR/USD came under pressure and essentially touched gloves with parity following a slump in the ZEW Indicator of Economic Sentiment for Germany mid-way through London trading. The US dollar also touched a high of 108.56, according to the US Dollar Index.

Long term, this is a sellers’ market. Both weekly and daily charts demonstrate scope to navigate lower until reaching a 1.272% Fibonacci projection from $0.9925 and support at $0.9919, respectively. Amplifying the bearish landscape, of course, is trend direction, decisively southbound since 2021. On the side of buyers, however, is the daily timeframe’s relative strength index (RSI), showing the indicator’s value penetrated oversold space and called attention to indicator support at 21.87. Another technical observation is the possibility of positive divergence. Though do be aware that this indicator can deliver a number of false reversal signals in trending environments.

Against the backdrop of higher timeframes, H1 price flow rebounded from $1.00, a widely watched level for many desks. As you can see, the pair has subsequently rallied to within striking distance of $1.01. Upstream, H1 supply warrants attention at $1.0170-1.0140.

The H4 timeframe delivers little for the time being, with daily resistance mentioned above at $1.0182 commanding position and a H4 1.618% Fibonacci projection seen lower on the curve at $0.9926.

In view of the bearish scene surrounding EUR/USD, and weekly, daily, and H4 timeframes observing support levels under parity, testing the lower side of $1.01 on the H1 could serve to provide sellers some short-term resistance. Ultimately, downside support targets rest at $0.9926, $0.9925 and $0.9919.

Following a near-2 per cent decline on Monday, AUD/USD received some respite on Tuesday and clawed back a portion of Monday’s losses. My outlook for this currency pair remains unchanged long term. I remain bearish, and here’s why, as stated in recent writing (italics):

The Australian dollar continues to reflect a bearish atmosphere against the US dollar, veering lower since $0.8007 (22nd Feb high [2021]). The monthly timeframe has portrayed a downtrend since August 2011, indicating the rally from the pandemic low of $0.5506 (March 2020) to a high of $0.8007 (February 2021) on the weekly timeframe is likely viewed as a deep pullback among chartists. Downside from the 2021 February top (an early primary bear trend), therefore, is potentially seen as a move to explore lower over the coming weeks.

I also noted the following in regards to weekly support currently in play:

Weekly support made its way into the spotlight in recent weeks, between $0.6632 and $0.6764 (composed of a 100% Fibonacci projection, a price support, and a 50% retracement). Whether this is sufficient to tempt a bullish showing is difficult to estimate at this point. Not only because of the clear downtrend, but also due to the US dollar’s relentless advance. Consequently, the aforementioned support is likely to remain on the radar for many technicians.

As you can see on the daily timeframe, price remains in favour of selling after cementing position south of Quasimodo support from $0.6901. Support is seen at $0.6678 (rests within weekly support). Adding to the bearish prospect, the chart’s relative strength index (RSI) continues to discover space under its 50.00 centreline (negative momentum).

Between $0.68 on the H1 timeframe and H4 resistance from $0.6772, given the bigger picture, this could be a zone the charts watch sellers emerge from and attempt to take aim at $0.67.

Buyers and sellers continue to square off around weekly resistance at ¥137.23, a level entering the frame this week. Nevertheless, in a market displaying a dominant primary bull trend since 2021, current resistance is in a vulnerable position. What’s also technically interesting is the daily timeframe exhibiting scope to approach ¥139.55, a Quasimodo support-turned resistance. This follows a mid-June retest of daily supply-turned demand at ¥131.93-131.10.

In terms of the relative strength index (RSI), my outlook remains unchanged for now (italics):

Through the relative strength index (RSI) on the daily chart, the popular momentum gauge has demonstrated reduced momentum since the indicator delivered negative divergence on 14th June. Indicator support between 40.00 and 50.00, therefore, is an obvious base to monitor, an area serving as a ‘temporary’ oversold zone since May 2021 (common in strongly trending environments). If further buying takes shape, as suggested through the lack of bearish pressure from weekly resistance, indicator resistance is in sight at 87.52.

Sterling probed a two-year low of $1.1807 versus the dollar on Tuesday, as weekly price attempts to cement position under its Quasimodo support at $1.1958. Violating $1.1958 unmasks the pandemic low of $1.1410 as the next reasonable downside target. Trend direction has also been unmistakably bearish since February/May’s double-top formation on the weekly timeframe at around $1.4241. Furthermore, seen through the monthly timeframe, the long-term downtrend has been soft since late 2007 tops at $2.1161.

In terms of where I stand on the daily timeframe, limited support is evident until the 100% Fibonacci projection ratio at $1.1683. Overhead directs focus to trendline resistance, taken from the high $1.3639, and therefore could be a technical point we see sellers surface from in the event of a push higher. In conjunction with the weekly chart’s bearish vibe, the daily timeframe’s relative strength index (RSI) remains under its 50.00 centreline (negative momentum).

As can be seen from the H4 timeframe, price action is poised to retest the lower side of resistance coming in at $1.1933, which happens to be joined closely with a local trendline resistance, taken from the high $1.2332. Based on the H1 timeframe, trendline support recently formed, drawn from the low $1.1812. Price is now navigating space north of $1.19; Defending this level throws light on resistance at $1.1949, followed by prime resistance at $1.2006-1.1986, which houses the widely watched $1.2000 figure within.

Longer-term technical studies show weekly Quasimodo support at $1.1958 is likely to be eventually overthrown. A decisive close south of here tips the currency pair in favour of further downside, targeting at least the daily timeframe’s 100% Fibonacci projection at $1.1683, in line with the current downtrend.

Short term, consistent with the bigger picture, the area between H4 resistance at $1.1933 and H1 resistance from $1.1949 could be an area we see sellers make a show from.