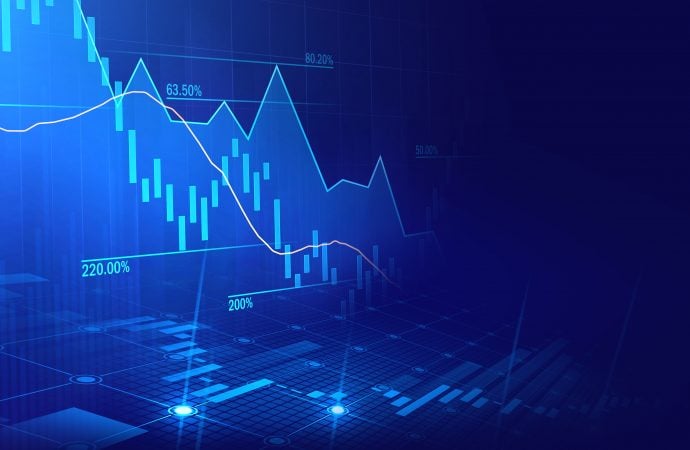 It was another relatively optimistic day for EUR/USD on Tuesday, extending Monday’s mild recovery gains by 0.4 per cent. Surprisingly, markets witnessed an advance in US consumer confidence to 103.2, effortlessly surpassing July’s downwardly revised 95.3 reading. Job openings in the US also recorded a slight uptick, topping 11.2 million in July. This appears to be an improvement in the US economy, yet major US equity indexes sold off. Meanwhile, the US Dollar Index is ‘holding its own’, consequently weighing on euro demand.

Technically, as noted in previous writing, price action on the weekly timeframe has been entrenched within an unmistakable primary bear trend since pencilling in a top in early 2021 with heavy-handed pullbacks in short supply. Resistance falls in at $1.0298 on the weekly scale, with resistance on the daily chart formed by way of a trendline resistance, taken from the high $1.1495. The currency pair, however, has managed to regain some poise after shaking hands with weekly support in the form of a 1.272% Fibonacci projection at $0.9925 last week (alternate AB=CD bullish formation) and daily support coming in at $0.9919 (aided by a bounce seen from the relative strength index [RSI] trendline resistance-turned support ahead of oversold space). Yet, whether the aforementioned supports are sufficient to withstand bearish forces in the weeks to come is difficult to estimate in light of the current trend.

Closer analysis of price action shows the currency pair forging support from parity ($1.00), though resistance at $1.0046 is putting up a fight. North of the aforesaid level, $1.01 (and Quasimodo support-turned resistance at $1.0108) calls for attention, while tumbling under $1.00 propels $0.99 back into the frame.

Upbeat US economic data, a reasonably robust USD, and downbeat risk sentiment pressured the Australian dollar lower against its US counterpart Tuesday. Technically, AUD/USD selling should not surprise.

The currency pair has reflected a primary bear trend since forging a top from $0.8007 (22nd Feb high [2021]), action currently suggesting a drop back into weekly support between $0.6632 and $0.6763, constructed from a 100% Fibonacci projection, horizontal price support, and a 50% retracement. You will also note that the daily timeframe is respecting the lower side of resistance at $0.6901 and on the verge of venturing south of a head and shoulders top pattern neckline, drawn from the low $0.6869. Further adding to this bearish vibe is the daily chart’s relative strength index (RSI) rejecting the underside of the 50.00 centreline. Therefore, trendline resistance-turned support, drawn from the high $0.7661, could soon welcome price action, followed closely by support at $0.6678.

Daily flow holding resistance at $0.6901, price threatening to breach the daily head and shoulders top pattern neckline, along with an active primary bear trend, emphasises a bearish stance. This opens the door for a break of H1 Quasimodo resistance-turned support at $0.6843, with short-term selling perhaps unfolding towards $0.68 and H4 prime support at $0.6774-0.6815.

Amidst a clear phase of risk aversion, USD/JPY wrapped up Tuesday directionless, albeit refreshing a six-week pinnacle at ¥139.08.

While the weekly timeframe’s price action is busy cementing position north of support at ¥137.23—inching towards forging a fresh multi-year pinnacle with scope to climb as far north as weekly resistance from ¥146.79—daily resistance at ¥139.55 could ‘throw a spanner in the works’ for buyers. Should we overthrow the aforementioned resistance, this sends a robust signal that buyers are still in the driving seat, in line with the current primary bull trend, and will likely want to explore higher territory.

I had the following to say regarding the daily timeframe’s relative strength index (RSI) in previous writing (italics):

As evident from the H4 timeframe, nearby resistance is featured in the form of a 1.618% Fibonacci projection at ¥140.15, and support demands attention from ¥137.45, closely followed by support at ¥135.58. Realised from the H1 timeframe, recent flow established a bullish flag between ¥139 and ¥138.26, a pattern that experienced a breach to the upside in US trading yesterday. This indicates a break of ¥139 and at least a potential run at ¥140, with the bullish flag’s profit objective set at ¥141.63 (blue arrows).

All four timeframes suggest a break of ¥139, though traders are urged to pencil in the possibility of some turbulence from daily resistance at ¥139.55. Should we clear the noted level, ¥140 represents a reasonable upside objective in the near term.

The British pound ended another day in negative territory versus the US dollar amid fears of a long-scale recession in the UK as soaring energy costs grip the nation. Adding to this, according to a Bloomberg report, Goldman Sachs warned inflation could top 22 per cent next year.

$1.1958 offers resistance on the weekly timeframe—a recently punctured level of support—pointing to a potential test of the pandemic low of $1.1410. This, together with the primary bear trend since early 2021, places sellers in control for the time being.

Out of the daily timeframe, support at $1.1655 and $1.1683 are being tested: two 100% Fibonacci projection levels. Clearance of these barriers, technically speaking, provides an early cue that we are on our way to visit the pandemic low. The daily chart also shows that the unit has been trading beneath its 200-day simple moving average since August 2021 (currently trading around $1.2815). Additionally, the relative strength index (RSI) is on the verge of dropping in on oversold territory.

Against the backdrop of higher timeframe flow, H4 and H1 charts both greeted resistance at $1.1760 (14th July Low) and $1,1746 (a Quasimodo support-turned resistance), respectively. H4 space shows we have ample room to drill into deeper ground until hitting support around $1.1531, while the H1 chart casts light on possible support emerging from $1.16.

From a longer-term perspective, if daily price crosses beneath the 100% Fibonacci projection levels at $1.1683 and $1.1655, this places the pandemic low of $1.1410 in the line of fire for sellers. Shorter term, room is seen to approach $1.16 on the H1 scale, therefore a retest of $1.17 to form resistance could be enough to draw bearish attention.