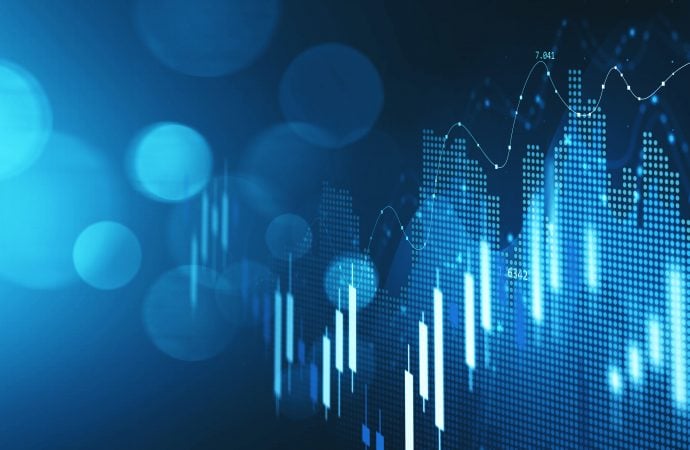 The US dollar echoed a soft tone on Thursday, with the US dollar index (ticker: DXY) piercing 91.00.

Europe’s shared currency, holding the largest weighting within the DXY, benefited from the USD’s downfall, leaving the 200-day simple moving average at 1.1942 unchallenged. The recent ascent tips the scale in favour of a Quasimodo resistance test at 1.2169.

As aired in recent technical briefings, the currency pair has been entrenched within an uptrend since early 2020, movement that many traders will likely refer to as a primary trend on this timeframe.

The RSI—in conjunction with yesterday’s price advance—chalked up a recovery from support at 51.36.

As shown from the H4 chart, EUR/USD bulls entered an offensive phase from the 1.1971/1.1990 support zone on Thursday and scaled to highs at 1.2071. Monday’s tops around 1.2075 echo possible resistance, with subsequent buying potentially setting the technical stage for an approach to resistance drawn from 1.2108.

As evident from the H1 chart, 1.20 did indeed embrace a mild whipsaw on Wednesday, allowing support at 1.1989 to enter the fray. However, upside attempts have been somewhat lacklustre thus far, unable to pencil in a fresh higher high and reach H1 resistance at 1.2035.

With monthly price eyeballing higher terrain, in addition to daily flow displaying scope to approach Quasimodo resistance at 1.2169, H4 action may overpower Monday’s peak at 1.2075 today and perhaps clear the river north to resistance pinned at 1.2108.

AUD/USD remained on the front foot on Thursday, extending Wednesday’s recovery gains and throwing light on resistance from 0.7817. Note the currency pair has been consolidating beneath this level since mid-April.

February’s low at 0.7563 remains a level to be mindful of to the downside, followed closely by trendline resistance-turned support, extended from the high 0.8007, and the 200-day simple moving average at 0.7470.

The RSI value continues to hug trendline support-turned resistance, extended from the low 36.55, though has so far been unable to influence a bearish presence south of the 50.00 centreline. Consequently, traders are urged to pencil in the possibility of a move north to test trendline resistance, drawn from the high 80.12.

Thursday’s bullish extension, elevated on the back of a waning greenback and technical buying out of 0.7696-0.7715 demand, positions price action within a stone’s throw from Quasimodo resistance at 0.7800.

Also of technical relevance is the currency pair has been carving out a consolidation between the 0.7800 Quasimodo resistance and the aforesaid demand area since April 20th.

The 0.78 psychological level is positioned directly above, a level serving as resistance since April 20th.  What’s also technically interesting is this barrier represents Quasimodo resistance on the H4, and is located just south of daily resistance at 0.7817.

The RSI formed a mild peak ahead of overbought in recent hours, with any downside from here likely to approach trendline support, drawn from the low 24.50.

Daily, H4 and H1 timeframes reveal price could make its way to at least the 0.78 region today—possibly even testing daily resistance at 0.7817.

This exposes H1 support at 0.7777 (previous Quasimodo resistance) as a possible base short-term dip-buyers may be drawn to today should a test unfold, targeting 0.78/0.7817.

Although 108.99 serves as a floor for the time being, bullish curiosity appears thin which may eventually call for moves to support at 108.50.

Supply at 109.52-109.39 has proved an effective base, beating back bullish attempts since Tuesday. Sellers, as you can see, shifted gears on Thursday and sliced through the 100-period simple moving average to test the mettle of 109 (dovetails with H4 support at 108.99).

The technical position out of the RSI indicator reveals the value circling the 40.00ish range, threatening a dip into oversold waters (support resides at 18.76).

However, should buyers regain consciousness and brush aside current resistance, Quasimodo resistance at 1.4250 could enter the frame.

From the RSI indicator, the value recently dipped from 58.20 peaks and crossed swords with trendline support, pencilled in from the low 36.14. As you can see, the aforementioned trendline is holding for the time being.

As for the price trend, GBP/USD has been trending higher since early 2020, despite the two-month retracement.

Thursday had the Bank of England (BoE) announce a slowdown in bond-buying, but stated this should not be interpreted as a change in the stance of monetary policy.

A reading of price action on the H4 timeframe, however, reveals GBP/USD continued to cling to the underside of resistance from 1.3919 on Thursday, forming what candlestick traders refer to as a long-legged doji pattern. North of here, we have 1.3976 tops, along with Quasimodo resistance at 1.4007.

The combination of resistance at 1.3929 and the 1.39 figure has clearly appealed to sellers this week

Below the aforesaid resistance zone—and the nearby 100-period simple moving average—analysts will likely be eyeing the 1.38 figure (joined by a 61.8% Fib level and a 100% Fib projection at 1.3789).