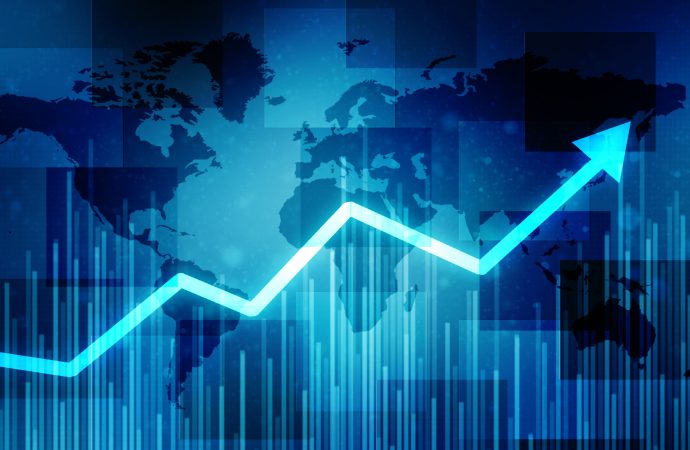 US Treasury yields rising across the curve—refreshing multi-year pinnacles—and the US Dollar Index (USDX) advancing more than 1 per cent as major US equity indexes plunged depressed any upside attempt on EUR/USD Thursday.

Technically, recent downside should not surprise.

Thus far, weekly Quasimodo supports between $1.0467 and $1.0517 have offered little to persuade buyers to commit. One factor likely discouraging any meaningful buying is the current downtrend, dominant since the beginning of 2021. Adding to this, seen clearly from the monthly timeframe, the overall vibe has been to the downside since topping in April 2008. Territory beneath current weekly supports calls attention towards the $1.0340 2nd January low (2017).

Aiding the bearish setting, of course, is price action on the daily timeframe retesting the lower side of the pandemic low of $1.0638 (March 2020) which established convincing resistance on Thursday. Consequent to this, the currency pair revisited two 100% Fibonacci projections between $1.0494 and $1.0526, echoing the possibility of a push for Quasimodo support coming in at $1.0377. In terms of the relative strength index (RSI), In spite of Thursday’s tumble, the indicator’s value recently exited oversold territory, following a near-test of indicator support at 21.87 late April.

A closer reading of price action on the H1 timeframe reveals Asia spent the session navigating territory north of $1.06, with European traders pulling the pair south of the psychological number in early trade. Following a brief retest of the aforementioned level, a one-sided drop emerged to shake hands with $1.05 (stationed just above Quasimodo support from $1.0481).

Based on chart studies, exploring under $1.05 is perhaps in the offing. With an absence of support until $1.04, further downside could be seen. Traders, however, are likely to seek additional confirmation beneath $1.05 given weekly and daily supports still in play. A retest of $1.05 as resistance may add confidence, for example.

Demand for US yields and the greenback, as well as recent talk of additional rate hikes from Fed Chair Jerome Powell, weighed on AUD/USD Thursday. Ahead of the 200-day simple moving average at $0.7281, the currency pair printed a near-full bodied bearish candle, indicating a test of a familiar decision point at $0.6964-0.7040 on the daily timeframe. As noted in previous writing, this area represents the ‘last line of defence’ for the weekly timeframe’s prime support at $0.6948-0.7242. Undeniably, April’s movement places the weekly timeframe’s prime support in question, reopening the risk of a return to weekly support at $0.6673 and neighbouring 50.0% retracement at $0.6764.

Supporting the possibility of further bearish pressure is the long-term direction:

Technical action on the daily timeframe ruptured the upper boundary of a flag pattern, drawn from a high of ¥129.41 and a low of ¥127.80, on 28th April. Assuming price overcomes supply at ¥131.93-131.10, traders will be looking to a take-profit objective of approximately ¥136.63 (drawn by extending the pole’s distance and adding this to the breakout point). Note that this profit objective sits above the weekly timeframe’s ¥135.16 high. In terms of the relative strength index (RSI), the indicator’s value is seen attempting to exit overbought territory. It’s important to recognise that any decisive exit from the overbought area forms a double-top pattern (neckline stationed around the 66.78 31st March low and peaks were established from indicator resistance at 87.52) and could lead the indicator to familiar support at 40.00-50.00 (a temporary oversold zone since May 2021). However, an important caveat is the RSI can remain overbought for prolonged periods in uptrends and cause a number of false bearish signals.

H4 Quasimodo resistance-turned support at ¥128.72 welcomed price yesterday, bolstering H1 price around the ¥129 psychological figure. Note that H1 action came within range of testing a clear Fibonacci cluster around ¥128.60 before venturing higher. Heading into US hours, the pair reclaimed ¥130+ status and is now poised to reach ¥131.

According to the charts, scope is seen to reach as far north as ¥131 on the H1 scale. Engulfing the latter will also help confirm bullish intent which may result in daily price taking on supply at ¥131.93-131.10.

A somewhat divided Bank of England (BoE) raised its official Bank Rate by a quarter of a percentage point on Thursday, lifting the interest rate to 1 per cent in what many view as another ‘dovish hike’. This witnessed the British pound plummet versus the US dollar, dropping more than 2 per cent.

You may recall that the weekly timeframe’s technical landscape projected the possibility of further downside in the weeks to come. Here’s where we left the weekly chart in Thursday’s technical briefing:

Sterling plunged to mid-2020 lows versus a broadly stronger US dollar last week, wiping out 2 per cent on the GBP/USD. The ongoing sell-off had weekly price elbow beneath support at $1.2719, a level that may form resistance in the coming weeks. What’s technically interesting on the weekly chart is the absence of clear support until reaching a Quasimodo formation at $1.2164, in a market demonstrating a clear downside bias from February 2021 tops ($1.4241) and a long-term downtrend since late 2007 tops at $2.1161.

Meanwhile on the daily timeframe, price is on the doorstep of Quasimodo support at $1.2334, with the relative strength index (RSI) attempting to pencil in a bottom around oversold territory. Should additional selling emerge, the weekly timeframe’s Quasimodo support offers a reasonable downside objective.

Daily Quasimodo support at $1.2334 is in play and could attract a recovery move today. However, knowing the weekly timeframe exhibits scope to tunnel lower to $1.2164, a retest of $1.24 (and the H1 Quasimodo support-turned resistance at $1.2421) could prove to be a welcomed resistance on the H1. Alternatively, breaking through $1.23 might draw breakout selling.