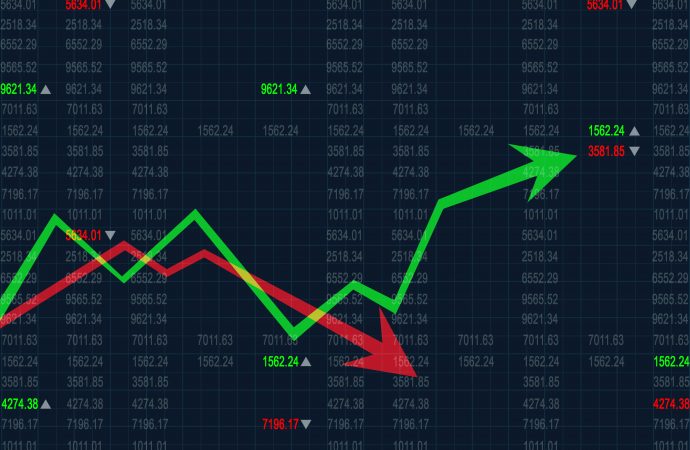 Following a dismal week of trading for Europe’s common currency (down 2.4 per cent), EUR/USD eked out modest losses on Monday. Over the course of last week, the currency pair navigated through the pandemic low of $1.0638 (March 2020) to a multi-year low of $1.0471.

In light of the lacklustre movement on Monday, the research team’s recent report is unchanged on the weekly timeframe:

Despite last week’s almost one-sided deterioration, weekly Quasimodo supports between $1.0467 and $1.0517 serve as a potential roadblock this week. Weekly Quasimodo support-turned resistance from $1.0778 deserves notice if buyers regain consciousness, while dethroning $1.0467 invites a test of the $1.0340 2nd January low (2017). As underlined in previous reports, buyers are somewhat hindered by the visible downtrend, dominant since the beginning of 2021. Adding to this, seen clearly from the monthly timeframe, the overall vibe has been to the downside since topping in April 2008.

Meanwhile, price action on the daily timeframe reveals buyers and sellers squaring off from a support zone between $1.0494 and $1.0526, composed of two 100% Fibonacci projections and, of course, the weekly Quasimodo support highlighted above at $1.0517. Recent fluctuations around the daily base pieced together a H4 pennant formation, drawn from $1.0593 and $1.0471. As you can see, the unit is threatening a breakout to the downside which could trigger another wave of bearish flow. Should H1 action commit and dethrone $1.05, this may be sufficient to permit a change in gear for sellers.

Of note regarding the H4 pennant pattern, a decisive breakout lower would have chart pattern enthusiasts begin to pencil in the downside target (the length of the pole [the previous down leg] applied to the breakout point). Technicians will also acknowledge pennants (as well as flags) are sometimes labelled as ‘half-mast patterns’ as they can occur half way through (in this case) the down move.

The absence of bullish interest from weekly Quasimodo supports between $1.0467 and $1.0517 and the daily timeframe’s 100% Fibonacci projections at $1.0494 and $1.0526 signals H4 price may break south of its pennant formation. A $1.05 close lower on the H1 timeframe, therefore, could encourage a bearish scenario.

The Australian dollar extended losses on Monday amid a broadly stronger buck. In spite of the Australian dollar not being included within the US Dollar Index (USDX), the dollar gauge discovered support from 102.95 on the daily scale and is poised to refresh year-to-date pinnacles. It’s also worth echoing that April witnessed AUD/USD print its largest one-month drop (5.7 per cent) since the beginning of the pandemic. Undeniably, April’s movement places the weekly timeframe’s prime support at $0.6948-0.7242 in question, reopening the risk of a return to weekly support at $0.6673 and neighbouring 50.0% retracement at $0.6764.

The long-term trend has the monthly timeframe portraying a downtrend since August 2011, indicating the pullback (February 2022 to April 2022) on the weekly timeframe has, for now, clearly been viewed as a ‘sell-on-rally’ theme and not a ‘dip-buying’ opportunity within the 2020 advance from pandemic lows of $0.5506 (march 2021).

Lower on the curve, daily flow greeted a decision point at $0.6964-0.7040 on Monday (fixed within the lower limits of weekly prime support mentioned above at $0.6948-0.7242). In effect, the area represents the ‘last line of defence’ for the weekly timeframe’s prime support. Analysis based on the relative strength index (RSI) reveals the indicator’s value touching oversold space—indicator support is also seen close by at 21.38.

The 1.272% H4 Fibonacci projection at $0.7057 and a deep 88.6% Fibonacci retracement from $0.7048 (purple) came under attack on Monday, unlocking the possibility of a drop to the $0.6968 28th January low (sits within the lower limit of the current daily decision point). In terms of the H1 scale, support at $0.7005 and the key figure $0.70 are noteworthy as buyers appear reluctant to commit at current support from $0.7038. This is due to a Quasimodo support-turned resistance at $0.7075 serving well on two occasions yesterday (early Asia and heading into US hours).

Despite the current daily decision point at $0.6964-0.7040 positioned within weekly prime support at $0.6948-0.7242, the overall trend facing southbound and USD strength are weighing on any upside attempts. This may expose a bearish scene south of H1 support from $0.7038, targeting the $0.70ish neighbourhood.

USD/JPY produced little in the way of noteworthy movement on Monday. As a result, much of the following analysis is unchanged as we step into Tuesday’s sessions.

In conjunction with this, and noting the dominant trend since 2021, the daily timeframe spent six sessions piecing together a bullish flag, drawn from a high of ¥129.41 and a low of ¥127.80. As you can see, last Thursday ruptured the upper boundary of the flag pattern and subsequently tested supply at ¥131.93-131.10. According to the flag pattern’s rules of engagement, however, traders will be looking beyond current supply to a take-profit objective of approximately ¥136.63 (drawn by extending the pole’s distance and adding this to the breakout point). Note that this profit objective sits above the weekly timeframe’s ¥135.16 high. In terms of the relative strength index (RSI), traders are unlikely concerned by the indicator’s persistent overbought conditions which is a common view within trending environments. While this may be the case, it’s important to recognise that any decisive exit from the overbought area forms a double-top pattern (neckline stationed around the 66.78 31st March low) and could lead the indicator to familiar support at 40.00-50.00 (a temporary oversold zone since May 2021).

Against the backdrop of the bigger picture, the H4 timeframe continues to work with a 1.272% Fibonacci expansion at ¥131.61 and a Quasimodo resistance-turned support at ¥128.72.

Both weekly and daily charts echo healthy bullish vibes at the moment. The weekly timeframe reveals scope to approach ¥135.16 and the daily timeframe recently punctured the upper edge of a bullish flag pattern. Should daily candles overwhelm supply at ¥131.93-131.10, this would add weight to further bullish activity.

Although not decisively reclaiming ¥130 to the upside on the H1, bids are clearly in play at the moment and might trigger a round of breakout buying, targeting ¥131.

The British pound gave back all of Friday’s gains on Monday as the US dollar flexed its financial muscle once again.

The recent weekly technical briefing noted the following on the weekly chart, which remains relevant as we step into Tuesday:

Sterling plunged to mid-2020 lows versus a broadly stronger US dollar last week, wiping out 2 per cent on the GBP/USD. April ended the month 4.3 per cent lower, pencilling in its largest one-month deterioration since July 2019. The ongoing sell-off had weekly price elbow beneath support at $1.2719, a level that may form resistance in the coming weeks. What’s technically interesting on the weekly chart is the absence of clear support until reaching a Quasimodo formation at $1.2164, in a market demonstrating a clear downside bias from February 2021 tops ($1.4241) and a long-term downtrend since late 2007 tops at $2.1161.

Out of the daily timeframe, its clear the long-term 61.8% Fibonacci retracement from $1.2502 (green) is on the brink of ceding ground and throwing light on Quasimodo support at $1.2334. The relative strength index (RSI) continues to explore oversold territory, following a low of 18.72 ahead of indicator support from 15.91. Caution is warranted in taking long signals based on oversold conditions as the indicator can remain oversold for prolonged periods in downward facing markets.

Support from $1.2441 is now within touching distance on the H4 scale after leaving resistance at $1.2650 unchallenged. Sub current support will likely see traders zero in on daily Quasimodo support from $1.2441. Coming from the H1 timeframe, following the formation of a head and shoulders pattern, the currency pair tumbled south of $1.26 and, in recent hours, dropped under $1.25. Aside from H4 support underlined above, the H1 chart shows limited support until reaching $1.24.

Having noted the H1 dipping under $1.25, alongside the weekly timeframe diving beneath support at $1.2719, further selling to H4 support could be on the cards to $1.2441.