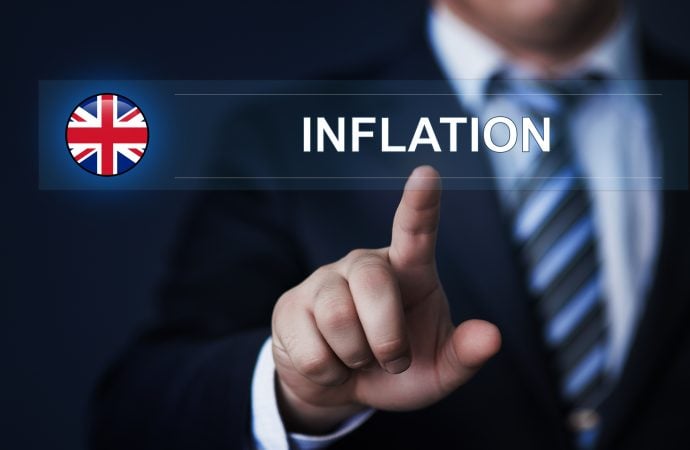 Monday’s advance, coupled with an extension on Tuesday, witnessed the upper border of the aforesaid pattern brought into sight, with price action responding in the form of a Japanese shooting star candlestick pattern. Sustained upside may lead to a whipsaw through the pattern’s upper boundary into the 200-day simple moving average (SMA), currently circling 1.1015.

A convincing daily close out of the current pennant pattern structure might give rise to a fresh wave of selling. Breaking lower entails tipping a 78.6% Fib level at 1.0745 and ultimately competing with demand at 1.0526/1.0638, an area extended from March 2017.

Technically, selling based off the upper edge of the current daily bearish pennant pattern forced a retreat to H4 demand at 1.0925/1.0897 (prior supply) on Tuesday. A decisive reversal out of the zone could lead to supply at 1.1057/1.1013. Sustained downside from current price, though, may shift focus to fresh demand at 1.0799/1.0827.

1.09, the point which the figure merges with H1 channel support, is an area likely on the watchlist for many intraday price action traders today. 1.09 is sited within the lower boundary of H4 demand at 1.0925/1.0897, and may glean additional support on the back of monthly price seen recovering from demand at 1.0488/1.0912.

Supply at 0.6618/0.6544 remains a dominant fixture on this timeframe, though has, as of yet, been unable to deliver much in terms of downside. An extension to the downside faces possible support from 0.6372ish, with a break unmasking 0.6253 (April 21 low).

Monday had the candles penetrate the upper boundary of the falling wedge pattern. Tuesday extended upside, travelling to a high of 0.6584 and piercing the top edge of supply at 0.6581/0.6545. What’s also special is the falling wedge take-profit target, measured by taking the base and adding this value to the breakout point (yellow), came within a few pips of completing at 0.6595.

Buyers took a back seat after testing the completion point of an ABCD bearish pattern at 0.6577 Tuesday, as we headed into the later phase of the session, sending price action back under 0.6550.

To the left of current price demand appears consumed until reaching possible support at 0.65. Interestingly, though, a whipsaw through 0.65 could be in the offing towards a demand zone at 0.6483/0.6472 (prior supply). Also note the 100-period simple moving average is seen crawling the underside of the noted demand at around 0.6470.

Short term, however, shows H4 price rotating lower from supply at 0.6581/0.6545, by way of a bearish outside pattern, missing the falling wedge take-profit target by a hair. This, together with H1 price displaying scope to approach at least 0.65 out of an ABCD correction, may lure sellers into the market today.

Recent upside took the USD/JPY to highs of 108.08, invading familiar supply at 108.10/107.79 and crossing paths with trendline resistance (106.92). The US dollar clawed back some strength from here, though is attempting to defend a nearby trendline support (prior resistance – 108.04). A break lower here could see light thrown on demand at 107.21/107.41, which essentially is the decision point to break into the current supply area.

Intraday activity swiftly changed hands at 108, turning lower from the psychological base heading into US hours Tuesday. Demand at 107.67/107.57 (prior supply) made a show and is, as of current price, holding.

Below demand re-opens the risk of a return to trendline support (106.03), trailed closely by the 100-period simple moving average at 107.25.

H1 demand at 107.67/107.57 offers particularly potent confluence. The scope to approach higher levels is clearly evident on the higher timeframes, with intraday activity supported by a H4 trendline support. This could lead to moves higher, perhaps running for the 108 base and 200-day simple moving average, and maybe, with a little pressure, complete the daily falling wedge pattern at 109.30. 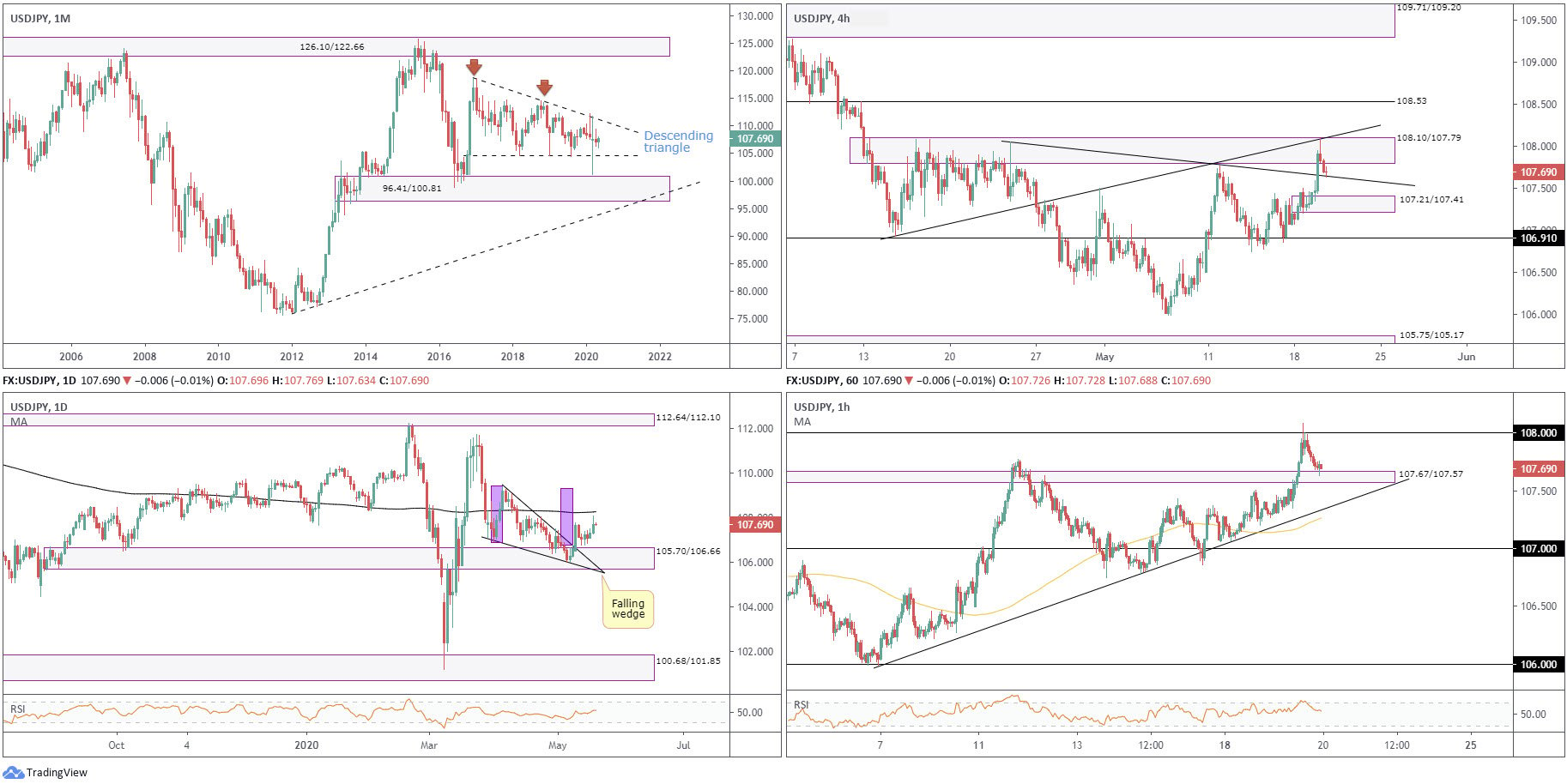 As of late, nevertheless, the British pound clawed back some losses vs. the greenback, derailing downside attempts. However, traders, particularly pattern traders, will be watching the neckline at 1.2247 for signs of selling. Often times you’ll see a pattern breakout followed by a retest before moving to the take-profit target.

Sterling enjoyed considerable support since the week kicked off, drawing channel resistance (1.2642) into the frame on Tuesday, which appears to have derailed upside attempts for now. Additional supply is seen to the left of price around 1.2280 (lower arrow), though this base may simply be a reaction off the upper zone at 1.2324 (upper arrow).

A violation of the current channel resistance, therefore, shines the headlights on supply from 1.2477/1.2438, while downside could see price action attempt to fill the descending channel.

As buyers and sellers butt heads around the daily double top neckline at 1.2247, along with H4 price closing under 1.2250 into the close and H4 rejecting channel resistance, this could put forward bearish themes today. There is, of course, one cautionary point to consider: monthly support at 1.1904/1.2235, though this area is positioned against the major trend. 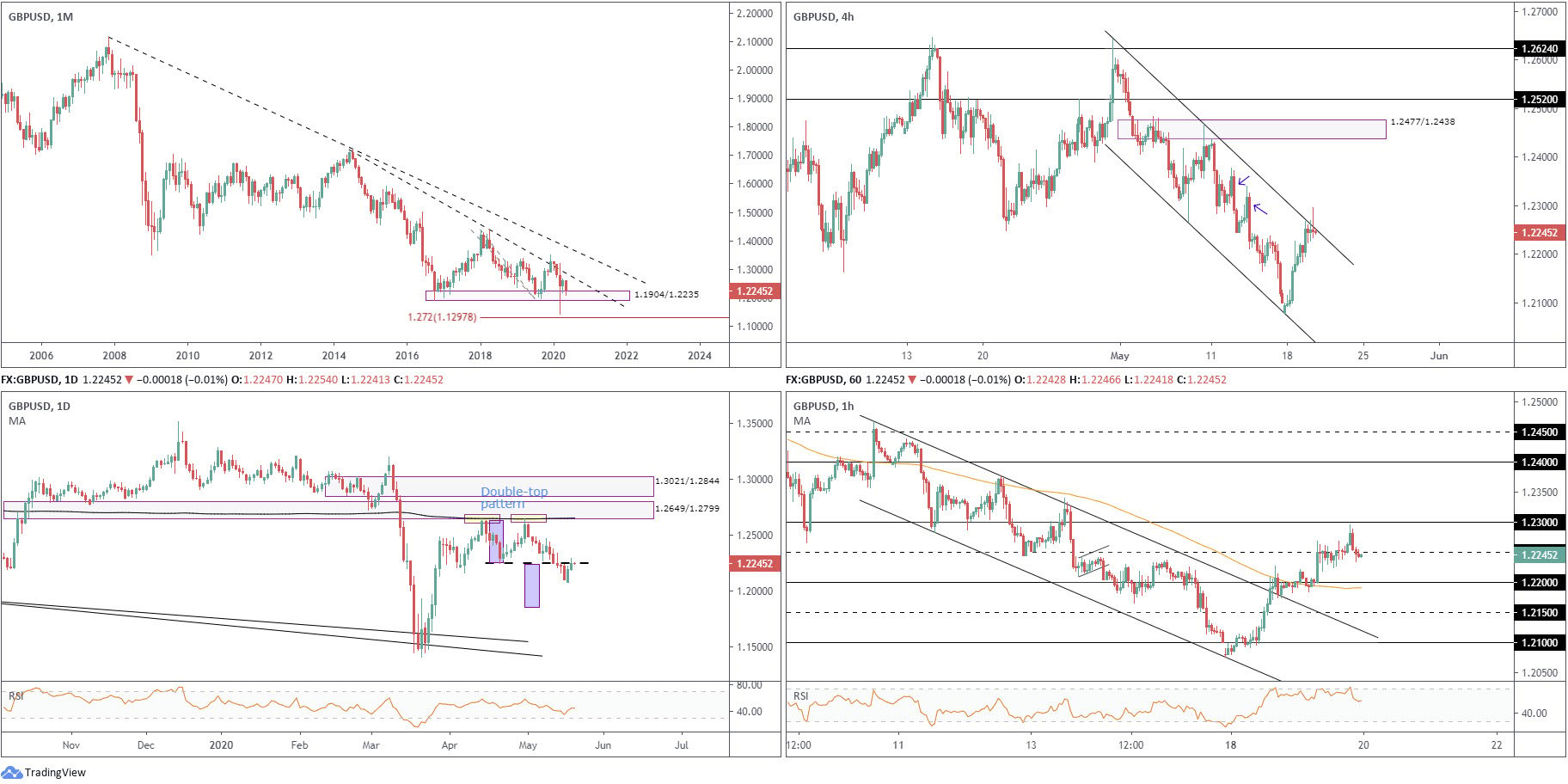