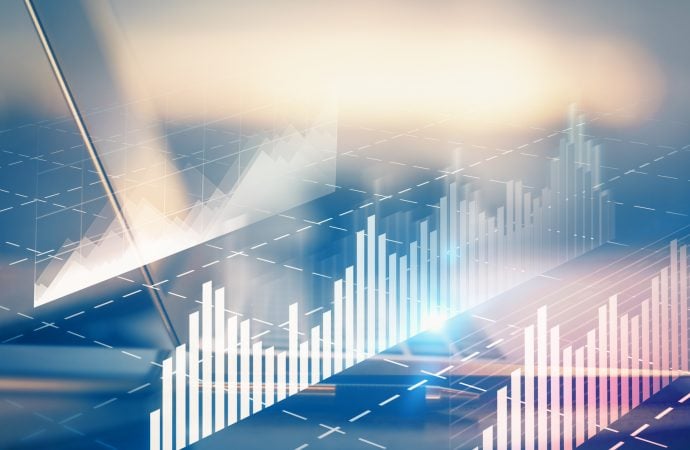 The dollar index (ticker: DXY) left behind a muted vibe on Thursday, with EUR/USD emulating the action.

On the data front, US jobless claims fell more than expected at 473,000 versus a forecast of 487,000. In addition, the Producer Price Index rose 0.6 percent in April, beating forecasts of 0.3 percent. This follows Wednesday’s upbeat inflation release.

Momentum, as measured by the RSI indicator, failed to clock overbought tops at the beginning of the week and is poised to potentially revisit support at 51.36.

As highlighted in Thursday’s analysis, 1.2059-1.2073 Fib support made a show following Wednesday’s aggressive downside pressure. Interestingly, this area provided enough fuel for buyers to make an entrance on Thursday and retest the lower side of 1.21. Consequent to this, a short-term consolidation is forming between the said areas.

Territory beneath the Fib zone shines the technical headlights on support drawn from 1.2035. Upstream—north of 1.21—the 100-period simple moving average calls for attention around 1.2128, followed closely by resistance parked at 1.2135.

Resistance at 47.50 on the RSI indicator is proving a tough nut to crack right now. Breaking the level, nonetheless, shows a relatively clear river north to overbought space.

With the overall trend facing higher, and monthly price exiting demand at 1.1857-1.1352 in April, a break higher could eventually take form. Therefore, a bullish breakout scenario may emerge above 1.21 on the H1, assuming a decisive close above the base—initially targeting H1 resistance at 1.2135.

The Australian dollar ended Thursday marginally off worst levels against the US dollar, for what was an uninspiring session all in all.

With respect to trend, despite a two-month retracement and yesterday’s down move, we have been decisively higher since the early months of 2020.

Support at 0.7696-0.7715 made a show on Thursday, greeting price action following a trendline support breach (drawn from the low 0.7531). As you can see, for now, upside attempts from the noted support zone have been contained by the underside of the trendline support in the form of resistance.

Heading into the early hours of US trading on Thursday, AUD/USD went on the offensive from 0.77 (held price higher since April 21st) and now shines the technical spotlight on resistance at 0.7755 (dovetailing with trendline resistance, drawn from the high 0.7890).

As for the RSI indicator, following RSI support at 19.40 entering the frame on Wednesday (capping downside since mid-April 2020), the value is now seen navigating territory just south of the 50.00 centreline.

Technically speaking, H4 action offers a limited perspective until either trendline support-turned resistance or the support at 0.7696-0.7715 gives way. Areas outside of the aforementioned barriers to be mindful of are demand at 0.7632-0.7653 and daily resistance at 0.7816.

On the H1, resistance at 0.7755 may catch the attention of short-term players today, having seen the base coincide with trendline resistance (red zone).

Trend studies reveal the pair has been trending higher since the beginning of 2021. In line with this, the RSI is attempting to secure position above resistance at 57.00, shifting attention to overbought space and RSI resistance at 83.02.

RSI resistance stepped forward at 79.60 yesterday and fuelled an overbought exit that subsequently watched the value nosedive through the 50.00 centreline. This implies additional downside momentum could be seen.

We have monthly price attempting to forge support off a recently breached descending resistance line, which underscores a potential bullish scenario. From the H1 timeframe, short-term flow shows trendline support around the 109.23ish range, aligning with Fib studies. This, if tested, prompts a bullish scene.

May, nonetheless, trades firmly on the front foot, up by 1.7 percent MTD.

It was a somewhat muted session Thursday, following Wednesday’s decisive 0.6 percent decline. Support at 1.4003, nevertheless, came within touching distance of entering the fray. Note this level served relatively well as resistance since March. 1.3857-1.3940 demand is plotted just beneath the said support.

Out of the RSI, traders will note the value rotated lower just south of overbought, movement which may see trendline support, taken from the low at 36.14, make an entrance.

Bullish energy from 1.4007, though, has been relatively light thus far. This signals the unit may navigate deeper water and shake hands with trendline support, extended from the low 1.3668.

Limited action was observed Thursday, with price scoring a narrow range ahead of the widely watched 1.40 figure, which happens to align with a 50.00% retracement level at 1.4003. Lower on the curve, support is found at 1.3929, and to the upside we can see the 1.41 figure (and nearby 100-period simple moving average).

From the RSI, the value penetrated trendline resistance, drawn from the peak 83.68. This signals we may see the 50.00 centreline give way.