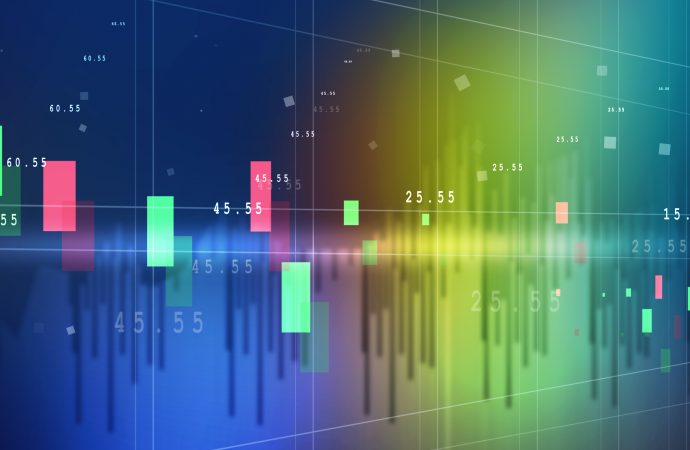 Despite annual US consumer prices remaining at multi-decade tops in April, Europe’s shared currency finished Wednesday largely muted against its US counterpart.

As a result, our higher timeframe outlook remains unchanged:

A bearish flag pattern remains plotted on the daily timeframe. Technicians will recognise that a flag is considered a continuation signal, which assuming a breakout to the downside in this case, could watch daily flow take aim at daily Quasimodo support from $1.0377. Also of technical relevance on the daily chart is price fluctuating between the lower side of the pandemic low of $1.0638 (March 2020) and two 100% Fibonacci projections between $1.0494 and $1.0526. In terms of the relative strength index (RSI), the indicator’s value exited oversold territory, following a near-test of support at 21.87 late April. Traders may also acknowledge early regular bullish divergence forming; a bullish failure swing would likely be a welcomed formation to help confirm the divergence. As of now, therefore, this appears a tentative signal.

Interestingly, trend studies support a bearish push. Seen clearly from the monthly timeframe, the overall vibe has been to the downside since topping in April 2008. Adding to this, the weekly chart has welcomed a clear downside bias since 2021 pinnacles. This, of course, places a strong technical question mark on Quasimodo supports between $1.0467 and $1.0517 from the weekly timeframe. Territory beneath the aforesaid barriers shine light on 2nd January low at $1.0340 (2017), pinned a touch under the daily timeframe’s Quasimodo support underlined above.

From the H4 timeframe, shorter-term flow has been pretty much motionless of late, working between prime resistance from $1.0680-1.0640 (an area accompanied by a 38.2% Fibonacci retracement at $1.0649 and a 1.272% Fibonacci projection at $1.0646) and Quasimodo support stationed at $1.0483. This area essentially marks the outer boundaries of the daily timeframe’s bearish flag.

The overall vibe remains to the downside in this market (see higher timeframes). Should a $1.06 test occur on the H1 timeframe that triggers a whipsaw to H1 resistance from $1.0631-1.0613 this could draw bearish hands into the market.

Leaving $1.06 unchallenged, on the other hand, directs candle action to $1.05. While a whipsaw into support from $1.0481-1.0492 is a possibility, upside from here might be limited and promote a bearish breakout scenario.

Kicking things off from the top, regular readers may recall the research team highlighted that weekly prime support at $0.6948-0.7242 was under siege. The aforementioned area’s lower edge is poised to abandon position, unearthing weekly support at $0.6673 and neighbouring 50.0% retracement at $0.6764. This should not surprise. Technically, this market is entrenched within a long-term downtrend. Here’s what recent research noted:

The monthly timeframe has portrayed a downtrend since August 2011, indicating the rally from the pandemic low of $0.5506 (March 2020) to a high of $0.8007 (February 2021) on the weekly timeframe is likely to be viewed as a DEEP pullback, with recent downside therefore potentially seen as a move to explore lower over the coming weeks.

In conjunction with the weekly timeframe, price action on the daily timeframe retested (and held) the lower side of a Quasimodo support-turned resistance at $0.6995. Quasimodo support calls for attention at $0.6901. According to the relative strength index (RSI), the indicator is within reach of oversold space after failing to shake hands with the underside of the 50.00 centreline. Indicator support also remains sketched in at 21.38.

Wednesday observed a textbook stop-run above the widely watched $0.70 figure on the H1. One can only imagine the number of traders caught by this move, tripping breakout buyers (bull trap) and taking out sellers that faded $0.70 as resistance only to see price trade favourably hours later. H1 resistance at $0.7046-0.7056, coupled with H4 Quasimodo support-turned resistance at $0.7055, served well as an area to fade into the whipsaw. Going forward, the currency pair is within striking distance of H4 support from $0.6924 and the daily Quasimodo support marked at $0.6901 (alongside $0.69 on the H1 scale).

This remains a sellers’ market for now after weekly price threatens to take on the lower side of prime support at $0.6948-0.7242. However, before sellers commit, they’re likely to pursue a close south of daily Quasimodo support at $0.6901.

The immediate aftermath of Wednesday’s US inflation reading watched USD/JPY climb beyond ¥130 to a high of ¥130.81. As evident from the H1 timeframe, buyers handed the baton to sellers at trendline support-turned resistance, extended from the low ¥128.62. Subsequent flow dropped back under ¥130 to touch a low of ¥129.45, ahead of H1 trendline resistance-turned support, taken from the high ¥131.25, during US hours. As such, the aforementioned trendline support will be watched in early trade, as will ¥129.

Interestingly, space south of ¥129 points to H4 Quasimodo resistance-turned support coming in at ¥128.72, which dovetails closely with a H1 1.272% Fibonacci projection from ¥128.84. Harmonic traders may recognise this as an ‘alternate AB=CD’ pattern.

Higher up on the curve, the weekly timeframe demonstrates scope to draw north, with resistance unlikely until as far north as ¥135.16: 28th January high (2002). In terms of support, we’re still working with ¥125.54. From the daily timeframe, Monday’s shooting star pattern from the lower side of daily supply at ¥131.93-131.10 finally saw sellers make a show on Wednesday. Whether this is enough to take things lower is difficult to estimate at this point, since the trend in this market is aggressively to the upside (trending higher since the beginning of 2021).

Also of interest, the daily timeframe reveals price action ruptured the upper boundary of a flag pattern on 28th April, drawn from a high of ¥129.41 and a low of ¥127.80. Assuming price overcomes neighbouring supply at ¥131.93-131.10, traders will be looking to a take-profit objective circa ¥136.63 (drawn by extending the pole’s distance and adding this to the breakout point). Note that this profit objective sits above the weekly timeframe’s ¥135.16 high.

The relative strength index (RSI) on the daily timeframe has also been attempting to exit overbought territory in recent weeks. It’s important to recognise that any decisive departure from the overbought area triggers a double-top pattern (neckline stationed around the 66.78 31st March low and peaks were established from indicator resistance at 87.52) and could lead the RSI to familiar support at 40.00-50.00 (a temporary oversold zone since May 2021). Yet, an important caveat to be aware of is the RSI can remain overbought for prolonged periods in uptrends and initiate a number of false bearish signals.

Ultimately, as noted in previous writing, direction remains tilted to the upside despite a slowdown in momentum in recent days.

Sterling remained under pressure versus the US dollar on Wednesday. From a long-term technical perspective, signs of further downside were clear.

The weekly timeframe, in a market decisively trending lower since the beginning of 2021, exhibits scope to tunnel lower until shaking hands with Quasimodo support coming in at $1.2164. This, of course, placed a question mark on daily Quasimodo support at $1.2334, which has recently vacated its position and perhaps cleared the path for the weekly Quasimodo support highlighted above. For those who follow our analysis on a regular basis you may recall that continued downside has followed the formation of a daily bearish flag pattern formed in early May, made up between $1.2411 and $1.2614 (the profit objective can be plotted as far south as $1.18). In terms of the daily timeframe’s relative strength index (RSI) bullish divergence appears unlikely within oversold territory at the moment. Bear in mind that the RSI can register oversold signals for extended periods in a downward facing market.