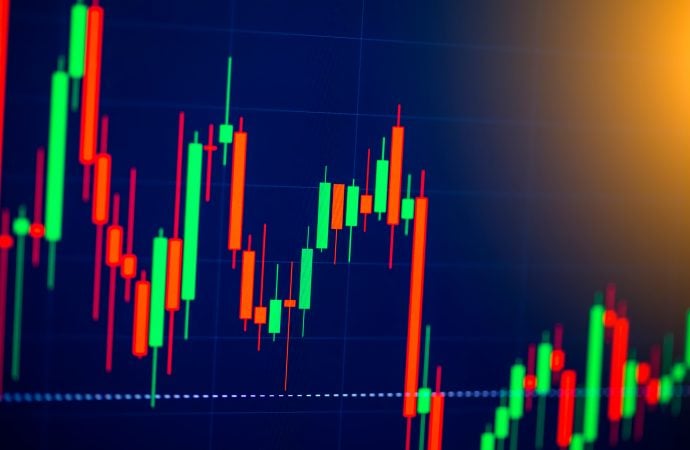 The amalgamation of the daily timeframe’s decision point zone at $1.0788-1.0854 (extended from May 2020), together with the relative strength index (RSI) rebounding from oversold terrain and H4 prime support at $1.0785-1.0820, underpinned a ‘technical’ bid. It should be noted that weekly price is seen rebounding ahead of Quasimodo support from $1.0778, sited a handful of pips under the daily decision point area.

According to trend on the bigger picture, a downside bias has been seen since topping at $1.2350 at the beginning of January (2021) on the weekly timeframe. This is reinforced by a weekly trendline support breach, drawn from the low $1.0636, together with the break of the $1.1602 November 2020 low (circled) and the retest of weekly resistance at $1.1473-1.1583. Therefore, a test of weekly Quasimodo support at $1.0778—area not seen since pandemic lows of March 2020—could still be seen. Adding to this bearish view, the daily timeframe has remained south of its 200-day simple moving average at $1.1577.

Lower on the curve, H4 action unseated resistance at $1.0903 on Tuesday which could invite an approach to resistance at $1.0991. EUR/USD outperformance also elevated the currency pair north of $1.09 on the H1 timeframe, potentially paving the way for continuation buying to $1.10 and a decision point from $1.1025-1.1008. Harmonic traders might also acknowledge the alternate AB=CD bearish formation at $1.007 (extended D-leg to a 1.272% Fibonacci projection).

A retest of $1.09 as support, therefore, might be somewhere buyers make a show. Additionally, the $1.10 region may be a location active sellers welcome price. Note that if $1.09 fails to offer a ‘floor’, sellers are likely to push lower, targeting the weekly timeframe’s Quasimodo support from $1.0778 (the $1.08 region on the H1).

In spite of improved risk sentiment, AUD/USD finished Tuesday pencilling in a second consecutive session in the red.

The weekly timeframe’s prime support area at $0.6968-0.7242 recently watched buyers gain power, though despite recording a fifth consecutive week higher, bulls are struggling to reach resistance at $0.7501. The higher timeframe trend may help answer for the lacklustre bid:

Longer term—the monthly timeframe—has portrayed a downtrend since August 2011, suggesting the 12.6 percent correction from mid-Feb tops at $0.8007 (2021) on the weekly timeframe might be the start of a bearish phase and not a dip-buying correction from the 2021 advance from pandemic lows of $0.5506. This (despite recent upside) places a question mark on weekly prime support. If a break lower should come to pass, weekly support at $0.6673 and a 50% retracement at $0.6764 are observable.

Developments on the daily timeframe shows price extended its retracement slide on Tuesday, following Monday’s test of trendline resistance, drawn from the high $0.8007. This led price under the 200-day simple moving average at $0.7318, with some traders perhaps betting on further underperformance towards a daily decision point at $0.6964-0.7040. The relative strength index (RSI) on the daily timeframe also reveals the value fast approaching the 50.00 centreline. Clearing this level shows negative momentum: average losses exceeding average gains.

Against the Japanese yen, the US dollar recorded another positive session on Tuesday, extending Monday’s recovery gains. Bolstered by rising US Treasury yields, the weekly timeframe has price action within touching distance of the 1.272% Fibonacci projection at ¥116.09.

Recent outperformance in USD/JPY should not surprise in regards to our recent trend studies:

The daily and H4 picture also remains pretty much unchanged:

The daily chart has been in the process of chalking up an ascending triangle pattern (typically considered a continuation arrangement) since December 2021 between Quasimodo resistance at ¥116.33 and an ascending line drawn from the low ¥112.53. Toppling ¥116.33 would allow analysts to chart a pattern profit objective by extending the ‘base’ distance (blue vertical box) from the breakout point. Withdrawing under the ascending line would seat supply-turned demand from ¥112.66-112.07 in the picture. Not only is the area in the company of a 78.6% Fibonacci retracement at ¥112.00 and a 50% retracement from ¥112.55, technicians will acknowledge the widely watched 200-day simple moving average housed within the zone at ¥112.45. Note that the relative strength index (RSI) is also rebounding from support between 40.00 and 50.00 (a ‘temporary’ oversold range since 10th May—common view in trending markets).

From the H4 timeframe, the unit is entrenched within a range between ¥114.72 and ¥115.78 (price ended Tuesday testing the upper base of this range). Points of interest outside of this consolidation are the 61.8% Fibonacci retracement at ¥114.57 (green horizontal line) and the daily timeframe’s Quasimodo resistance at ¥116.33. An additional note, of course, is the decision point from ¥113.54-113.78, joined closely with a possible AB=CD bullish pattern at ¥113.84.

Technical movement according to the H1 timeframe has price action testing two Quasimodo resistances at ¥115.75 and ¥115.69. Selling has been thin so far, discovering support around ¥115.42. A break of the aforementioned resistances will likely have breakout buyers take aim at ¥116.

Technical developments on the higher timeframes has weekly price shaking hands with a double-top [$1.4241] profit objective at $1.3090. This is also joined by the daily timeframe’s Quasimodo resistance-turned support at $1.3082 and the relative strength index (RSI) entering oversold conditions.

Consequently, from a technical perspective, sellers have their work cut out for them if they intend on absorbing the aforementioned support levels. This could see additional buyers enter the fray as we move into Wednesday’s more liquid sessions (UK and US).