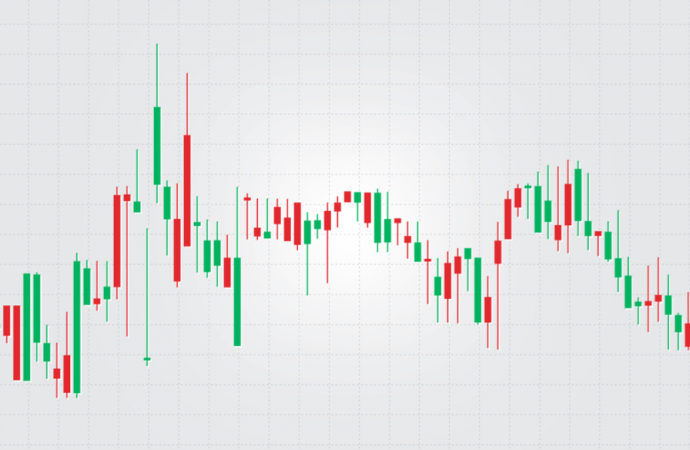 The US dollar continued to rally against the majority of its peers on Monday, elevated on higher US Treasury yields. Consequently, this has elbowed EUR/USD through support at 1.1887 and unearthed a 127.2% Fib projection at 1.1843 along with a 100% Fib extension at 1.1848.

In response to recent selling, momentum, as measured by the RSI oscillator, is shaking hands with oversold space.

Interestingly, the RSI oscillator is forming bullish divergence after recently making its way out of oversold territory.

With that, traders may monitor lower timeframe price action within 1.1818/1.1860 for a potential bullish scenario.

March, as you can probably see, trades lower by 0.8 percent.

The robust dollar bid continued to weigh on any AUD/USD upside attempts on Monday, leaving the currency pair under water into the close.

Technical structure reveals the currency pair overturned trendline support last week, taken from the low 0.5506. For that reason, technically speaking, there’s scope for further depreciation to February 2nd low at 0.7563, with a break unmasking demand at 0.7453/0.7384 (prior supply).

Concerning trend on this scale, however, price action has remained convincingly higher since March 2020.

Against the backdrop of price action, the RSI oscillator voyaged through the 50.00 centreline at the tail end of last week and is currently zeroing in on 40.00.

As evident from the H1 chart this morning, the green zone between H1 trendline resistance and the 0.77 figure welcomed sellers on Monday.

From the RSI indicator, we can see the value rejecting trendline resistance and the 50.00 centreline.

0.76 on the H1 appears to be on the cards as a downside target, following a successful 0.77 retest. Traders short the 0.77 region have likely reduced risk to breakeven and liquidated a portion of profits

Following January’s bullish engulfing candle and further outperformance in February, March is on the verge of mounting a bullish assault (up by 2.3 percent) on descending resistance (not considered traditional trendline resistance), etched from the high 118.66.

Advancing US Treasury yields underpinned a USD bid Monday, eking out a fourth successive bullish close for the USD/JPY.

The recent climb has also pulled the RSI oscillator into overbought waters, throwing light on resistance at 83.02 (active since 2015).

Two resistances stood aside on Monday at 108.56 and 108.81 (both now [potential] supports), perhaps paving the way for Quasimodo resistance coming in from 109.16. Note this level is anchored just beneath the daily Quasimodo at 109.38.

Despite the spirited advance, the RSI oscillator echoes bearish divergence, showing momentum to the upside slowing.

So, between 109.38 and 109, we could see a bearish theme emerge and countertrend traders possibly make a show.

March currently trades lower by 0.8 percent, though remains within the walls of February’s range.

A closer reading of price action on the daily chart reveals GBP/USD trades within close proximity of support at 1.3755, a level sharing chart space with trendline support, drawn from the low 1.1409.

With reference to the RSI indicator, the value dipped a toe beneath the 50.00 centreline and shook hands with support made up between 46.21 and 49.16. RSI support forming around the 40.00/50.00 range in trending environments is common.

As you can see from the H4 timeframe, movement was restricted Monday, with upside limited by 1.3852 resistance (above here, trendline resistance [taken from the high 1.4240] can be seen).

1.3761/1.3789 demand also remains in the fight, with an interesting demand zone residing just beneath current demand at 1.3730/1.3749. Although relatively small in range, this area is where a decision was likely made to break above 1.3757 tops. And with price leaving the demand unchallenged following the formation of the zone’s base, buyers may be drawn to this area.

From the RSI oscillator, trendline resistance is seen close by as the value rejects the underside of the 50.00 centreline.