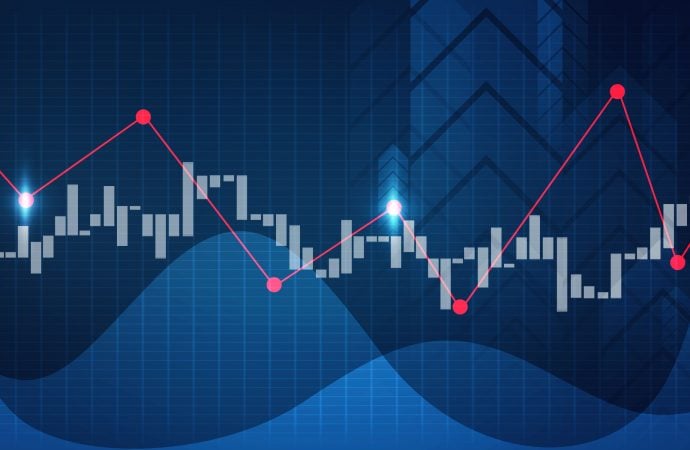 Europe’s shared currency fell sharply against a broadly stronger USD on Thursday, dipping 0.7 percent. Demand for the US dollar was largely driven by a Powell-induced advance in US Treasury yields.

EUR/USD left Thursday shaking hands with support at 1.1965, a previous Quasimodo resistance. A 1.1965 breach re-opens the risk of a return to familiar support coming in from 1.1887. It should also be noted the 200-day simple moving average is lurking close by, currently circling the 1.1804 region.

In terms of the RSI oscillator, we are pursuing terrain south of the 50.00 centreline right now, threatening a possible test of oversold levels.

February 5 low at 1.1952 is within striking distance, thanks to the recent sell-off. Movement also threw light on demand coming in at 1.1913/1.1932—a zone serving buyers at the beginning of December.

1.20, a widely watched level of support in this market, stood aside on Thursday and squeezed out any bids at the level.

The Quasimodo formation at 1.1957 is next on tap in terms of support, fastened just north of 1.1950 support.

Interestingly, the RSI, after dipping A toe in oversold territory, is seen within touching distance of support at 20.64.

Daily support at 1.1965—given nearby H1 Quasimodo support at 1.1957, the H1 RSI oscillator dipping into oversold territory and the market trending higher since 2020—is an area buyers may welcome today.

Trendline support, taken from the low 0.5506, is on the verge of giving way following Thursday’s second consecutive downside push amid a spike in US Treasury yields that underpinned USD health.

The RSI value continues to butt heads with the 50.00 centreline.

0.7650/0.7681 is also in the pot as possible demand today should sellers navigate deeper terrain.

The 0.78 round number and trendline support-turned resistance (taken from the low 0.7692) combination welcomed bearish flow on Thursday. A one-sided push to the downside was observed heading into the US session, throwing light on 0.77 and neighbouring demand at 0.7668/0.7688.

Out of the RSI, we can see the value interacting with oversold levels after failing to find acceptance above the 50.00 centreline.

On the back of surging US Treasury yields, Thursday witnessed the US dollar index cement a position north of the 91.00 figure and consequently elevate USD/JPY to higher ground.

Upstream, resistance is visible around the 108.28ish neighbourhood, fashioned by way of two Fib levels: 61.8% and 78.6% ratios.

With reference to the RSI indicator, we’re now navigating overbought waters, with resistance at 83.02 on the radar.

Short term, we can see the unit settled just south of the 108 figure yesterday, after forming demand around 107.52/107.64. The aforementioned area is important as it was within this zone a decision was made to overrun remaining offers within daily supply at 107.58/106.85. Therefore, a return to 107.52/107.64 could be interesting.

As expected, the RSI oscillator is engaging with overbought space, currently crossing swords with resistance at 86.43.

Thursday pencilling in a bearish outside reversal signals a possible dip to support at 1.3755, a level sharing space with trendline support, drawn from the low 1.1409. Higher on the curve, however, Quasimodo resistance at 1.4250 remains in view.

As highlighted in previous writing, RSI resistance made an entrance at 76.14 last week, capping upside since late 2017. Subsequent downside forced the indicator to within striking distance of the 50.00 centreline.

Trendline support-turned resistance remains visible to the upside, taken from the low 1.3566.

1.40, as you can see, has proven stable resistance, withstanding numerous upside attempts since the beginning of the week.

Recent hours had price aggressively drive lower and dethrone not only the 100-period simple moving average, but also the 1.39 figure. The latter is currently being retested as resistance, consequently shifting technical interest to Quasimodo supports at 1.3847 and 1.3861.

Action out of the RSI oscillator shows the value toppled the 50.00 centreline yesterday and is now bottoming a whisker ahead of oversold territory.