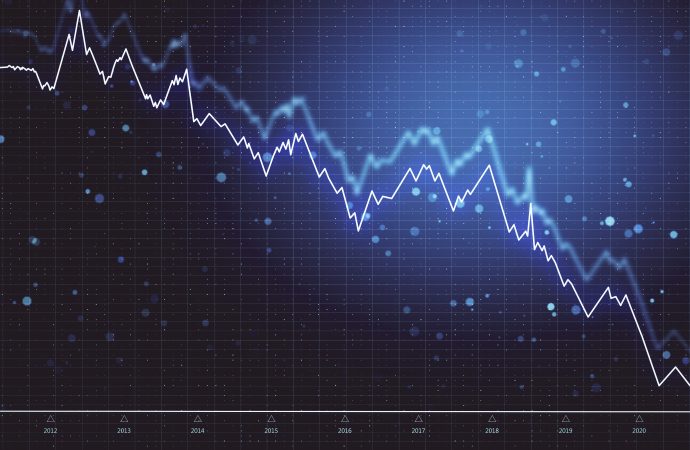 The US Dollar Index (USDX) continued to flex its financial muscle on Thursday, refreshing YTD pinnacles at 97.95 and pressuring EUR/USD to its lowest space since the end of May 2020. Recognising the USDX is fast approaching weekly trendline resistance and the daily timeframe’s relative strength index (RSI) is on the doorstep of oversold territory, the nearby daily timeframe’s prime support at $1.0941-1.1000 may welcome a ‘relief rally’.

However, while technical evidence places daily prime support in a reasonably positive light, we must remain aware of what the weekly timeframe is telling us:

According to trend, a downside bias has been in play since topping at $1.2350 at the beginning of January (2021) on the weekly timeframe. This is reinforced by a weekly trendline support breach, drawn from the low $1.0636, together with the break of the $1.1602 November 2020 low (circled) and the retest of weekly resistance at $1.1473-1.1583. Continued interest to the downside brings attention to as far south as Quasimodo support at $1.0778—area not seen since pandemic lows of March 2020.

In terms of where we stand on the H4 timeframe, the currency pair tunnelled through $1.1089 support on Thursday which sponsors a potential move to support from $1.0991-1.1019. Latest developments out of the H1 timeframe has price crossing swords with Quasimodo resistance-turned support at $1.1046, drawn from 30th March 2020. Technically, $1.1046 appears to be the last line of defence. Absorbing the latter directs headlights towards the widely watched $1.10 psychological figure, a base residing within H4 support at $1.0991-1.1019 and also serving as the upper boundary of daily prime support from $1.0941-1.1000.

AUD/USD bulls remained on the offensive for a second consecutive session on Thursday, a welcomed sight out of the weekly timeframe’s prime support area at $0.6968-0.7242 which has failed to ignite much bullish interest since late 2021. On track to record a fifth successive week in the green, a continuation higher shines light on weekly resistance priced at $0.7501.

With respect to trend, the outlook remains largely unchanged:

Longer term—the monthly timeframe—has portrayed a downtrend since August 2011, suggesting the 12.6 percent correction from mid-Feb tops at $0.8007 (2021) on the weekly timeframe might be the start of a bearish phase and not a dip-buying correction from the 2021 advance from pandemic lows of $0.5506. This (despite recent upside) places a question mark on weekly prime support. If a break lower should come to pass, weekly support at $0.6673 and a 50% retracement at $0.6764 are visible.

European and US equities dropped on Thursday, consequently inspiring a safe-haven USD bid. Despite this, USD/JPY ended the session marginally lower, unable to muster sufficient strength to dethrone H1 Quasimodo resistance at ¥115.75. The break of the ¥115.44 session lower could exacerbate short-term downside as we head into Friday’s session, targeting the ¥115 neighbourhood.

From the H4 timeframe, trendline support-turned resistance, drawn from the low ¥113.47, and daily Quasimodo resistance at ¥116.33, remains a key area. To the downside, the 61.8% Fibonacci retracement at ¥114.57 echoes notable support.

In terms of higher timeframes, the technical position is unchanged:

The daily chart has been in the process of chalking up an ascending triangle pattern (typically considered a continuation arrangement) since December 2021 between Quasimodo resistance at ¥116.33 and an ascending line drawn from the low ¥112.53. Toppling ¥116.33 would allow analysts to chart a pattern profit objective by extending the ‘base’ distance (blue vertical box) from the breakout point. Withdrawing under the ascending line would seat supply-turned demand from ¥112.66-112.07 in the picture. Not only is the area in the company of a 78.6% Fibonacci retracement at ¥112.00 and a 50% retracement from ¥112.55, technicians will acknowledge the widely watched 200-day simple moving average housed within the lower limit of the zone at ¥112.36. Note that the relative strength index (RSI) is also rebounding from support between 40.00 and 50.00 (a ‘temporary’ oversold range since 10th May—common view in trending markets).

Longer term, however, resistance between ¥116.33 (daily Quasimodo resistance) and ¥116.09 (Weekly Fibonacci resistance) is noteworthy on the higher timeframes, sharing chart space with H4 trendline support-turned resistance, drawn from the low ¥113.47, and the ¥116 figure on the H1.

Boosted on the back of safe-haven demand, the US dollar rallied on Thursday and crippled upside efforts in GBP/USD. Overall, though, we have seen limited change in this market since the currency pair made contact with support at $1.3355 on the daily timeframe. Territory beneath current support has daily Quasimodo support at $1.3119 to target (set nearby the weekly timeframe’s double-top [$1.4241] profit objective at $1.3090), yet should buyers regain consciousness we may retest resistance at $1.3602—sited just under the 200-day simple moving average at $1.3654.

Regarding trend, we remain unchanged in our outlook (italics):

Regarding the H4 timeframe, attention remains fixed on an AB=CD formation at $1.3263 and a Quasimodo support-turned resistance at $1.3436. As for the H1 timeframe, early London witnessed price momentarily explore territory above $1.34 before dropping to within striking distance of $1.33 (just north of H1 Quasimodo resistance-turned support at $1.3271).

Having seen daily support from $1.3355 on ‘shaky’ ground, sellers could remain in the driving seat in early trading today, perhaps attacking $1.35 (H1).