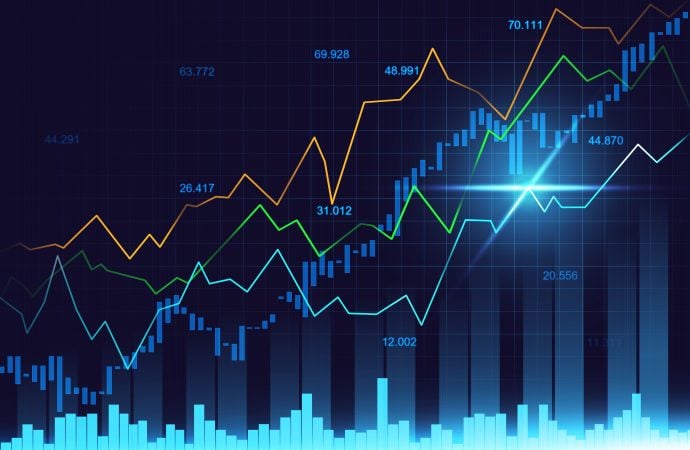 Against a basket of six international currencies, the US Dollar Index (USDX) extended its retracement slide Wednesday (down approximately 1 percent WTD). Unsurprisingly, EUR/USD capitalised on USD softness, adding 0.7 percent at the close of European trading.

The technical story is interesting. Trend on the bigger picture (weekly and daily timeframes) faces lower. Longer-term, the trend remains averse to upside movement, reflecting bearish status since topping at $1.2350 at the beginning of January (2021). This is reinforced by a weekly trendline support breach, drawn from the low $1.0636, together with the break of the $1.1602 November 2020 low (circled) and the pair refreshing year-to-date lows at $1.0806 in early March. Supporting the bearish picture, of course, is the currency pair trading beneath its 200-day simple moving average at $1.1493 since mid-June. As a result of the downside bias, the area between daily resistance at $1.1224 and weekly resistance from $1.1174 echoes a possible ‘sell-on-rally scenario’.

Weekly channel support, extended from the low $1.1186 (arranged north of weekly Quasimodo support at $1.0778), remains a technical ‘floor’ for the time being, joined closely by the $1.0788-1.0854 decision point on the daily timeframe (as well as an intersecting ascending support, drawn from the $1.0340 3rd January low 2017). An additional study on the daily scale reveals the relative strength index (RSI) voyaging north of the 50.00 centreline. Venturing above here informs market participants that average gains exceed average losses on this timeframe (positive momentum), though indicator resistance residing at 63.66 could put a cap on upside momentum.

Against the backdrop of weekly and daily timeframes, the outlook is brighter. H4 manoeuvred north of trendline resistance (drawn from the high $1.1495) in dominant fashion and recently engulfed supply from $1.1139-1.1090. A H4 decision point is calling for attention at $1.1234-1.1195. Reinforcing the bullish landscape, H1 climbed above $1.11 and set the technical stage for an approach to $1.12 (and Quasimodo resistance at $1.1224). Of particular importance on the H1 scale is prime support at $1.1067-1.1094. Any retracement from current prices could unlock the possibility of a $1.11 whipsaw into the noted prime support area.

Long term, technical studies shine light on weekly and daily resistances between $1.1174-1.1224, an area complemented by the current downside bias. This places a question mark on recent upside on lower timeframes. Consequently, in view of the H4 decision point from $1.1234-1.1195 intersecting with daily resistance at $1.1224, this is perhaps an area we will see active sellers draw to.

It was another monotonous session for AUD/USD on Wednesday, with the currency pair struggling for clear direction. In similar fashion to recent writing, higher timeframe technical movement is unchanged from this week’s technical weekly briefing.

Extending recovery gains last week, AUD/USD occupied weekly resistance coming in from $0.7501. This followed the prior week’s decisive bid from weekly prime support at $0.6948-0.7242. As a result, weekly prime resistance at $0.7849-0.7599 also warrants focus. While the surge higher may excite traders and investors, the trend, according to overall chart studies, suggests that surpassing the noted resistance levels on the weekly scale may be problematic. Longer term, the monthly timeframe has portrayed a downtrend since August 2011, signifying the 12.9 percent correction from mid-Feb tops at $0.8007 (2021) on the weekly timeframe might be the start of a bearish phase and not a dip-buying opportunity within the 2021 advance from pandemic lows of $0.5506. A bearish scene from $0.7051 resistance or prime resistance at $0.7849-0.7599, therefore, could develop. If a $0.6948-0.7242 break lower should come to pass, weekly support at $0.6673 and a 50% retracement at $0.6764 are observable.

Meanwhile on the daily timeframe, early trading last week pencilled in a trendline resistance breach (drawn from the high $0.8007). Communicating a bullish signal, along with price trading above its 200-day simple moving average at $0.7297, the possibility of a continuation run towards $0.7660 is in the offing. As you can see, the double-bottom pattern ($0.6991) had its neckline taken ($0.7314) in early March and drew attention to its profit objective at $0.7660 (connects closely with Fibonacci resistance between $0.7641 and $0.7609). However, recognising the weekly space connecting with resistance (see above), upside momentum clearly lacks energy. According to the relative strength index (RSI), despite a rebound from the 50.00 centreline, the indicator has yet to engulf the 68.24 high formed on 4th March (bearish divergence might eventually emerge). Should we invade overbought territory, nevertheless, indicator resistance from 74.80 is of particular importance.

According to H4 space, the currency pair continues to respect the underside of resistance between $0.7547 and $0.7527 (composed of two Quasimodo resistances and a 1.272% Fibonacci expansion together with merging closely with weekly resistance mentioned above at $0.7501). Sellers, at the time of writing, appear unwilling to commit to test the mettle of Quasimodo resistance-turned support coming in at $0.7451. This is a bullish sign which the H1 chart supports, overthrowing $0.75 to the upside late Tuesday and remaining above the barrier Wednesday. Prime resistance is seen at $0.7561-0.7540, which if breached potentially clears the river to the $0.76 neighbourhood.

Alongside the US Dollar Index (USDX) pencilling in a second successive down day, USD/JPY navigated lower terrain on Wednesday. The weekly technical framework remains unchanged. Here’s a reminder of where we left this timeframe on Wednesday:

Tuesday watched USD/JPY withdraw from Monday’s multi-year ¥125.11 pinnacle, technically aided by the weekly timeframe’s Quasimodo resistance at ¥124.42. Closing at current prices would have candlestick enthusiasts label recent movement as a possible bearish signal: Japanese shooting star pattern. Seeking lower ground from current prices shines light on weekly support from ¥118.66. Although we’re retreating from resistance, trend studies communicate a bullish vibe. The overall longer-term trend has been higher since 2012 (check monthly timeframe). The 21.5 percent correction from June 2015 to June 2016 provided a dip-buying opportunity, as did a subsequent 14.8 percent correction from December 2016 to pandemic lows formed early March 2020. Adding to this, we also broke the ¥118.66 December 2016 high in mid-March.

Similar to the weekly timeframe, our technical outlook on the daily chart, despite a second bearish candle, also remains unmoved:

In line with the weekly timeframe, daily price defended resistance coming in at ¥123.72. Demand is seen at ¥118.25-119.16 should sellers continue to show. An additional technical note is the relative strength index (RSI) peaking around 87.00, a level not seen since 2014. Although a considerably high RSI value, traders are urged to exercise caution as amidst trending environments the RSI can remain within overbought space for prolonged periods and initiate a number of false bearish signals. Adding to the daily picture, it’s important to note that the unit has traded above its 200-day simple moving average at ¥113.23 since February 2021.

Across the page, H4 movement dropped in on support at ¥121.44-120.89 after tunnelling under support (now possible resistance) at ¥122.27. Further weakness could draw in additional support from ¥120.06-119-57. In terms of the H1 timeframe, Wednesday spent the majority of the session carving out a potential pennant formation at the underside of ¥122 (drawn between ¥121.32 and ¥122.08). Decisively rupturing the lower side of the aforementioned pattern could have breakout sellers zero in on ¥121, followed by ¥120 and the pennant profit objective around ¥119.92.

From a short-term view, further downside is possible should price establish a dominant close below the H1 timeframe’s pennant pattern. Breaking out of this formation may witness price address at least ¥121, sat within H4 support at ¥121.44-120.89.

The US dollar continuing its retreat on Wednesday underpinned a GBP bid from daily support at $1.3082. This, however, is unlikely sufficient to motivate GBP buyers. Unsupportive of buying from here is the relative strength index (RSI) on the daily timeframe pulling lower from the 50.00 centreline. For any longer-term trend followers watching the longer-dated moving averages, you will also note the currency pair continues to operate south of the 200-day simple moving average at $1.3568—a (technical) bearish view.

Prime resistance is also a focal point on the weekly timeframe at $1.3473-1.3203 with the chart demonstrating scope to drop as far south as weekly support from $1.2719. Trend direction on the weekly has been southbound since late 2007 tops at $2.1161. As a result, the 25 percent move from pandemic lows in March 2020 to February 2021 might be viewed as a pullback within the larger downtrend. This, of course, places a question mark on the 8.5 percent ‘correction’ from February 2021 to March 2022, suggesting the possibility of continuation selling.

Out of the H4 timeframe, technical eyes will be focused on resistance at $1.3194 (serving well since late November 2021). From the H1 timeframe, early US hours rejected Fibonacci resistance between $1.3187 and $1.3170, leading price lower to retest a recently breached channel resistance (taken from the high $1.3298). Buyers, as you can see, have responded from the channel resistance-turned possible support, but whether this is enough to halt downside towards $1.31 remains to be seen.

Given weekly prime resistance at $1.3473-1.3203 receiving price action, in addition to trend direction facing southbound, upside efforts from daily support at $1.3082 are likely to be fragile. Therefore, chart studies indicate possible clearance of the level.

If H1 stages a short-term recovery from channel resistance-turned support, H4 resistance around $1.3194, combined with the $1.32 figure on the H1, could welcome price movement. With the trend favouring sellers, therefore, the zone between $1.32 and the lower side of H1 Fibonacci resistance at $1.3170 might be an area of interest.