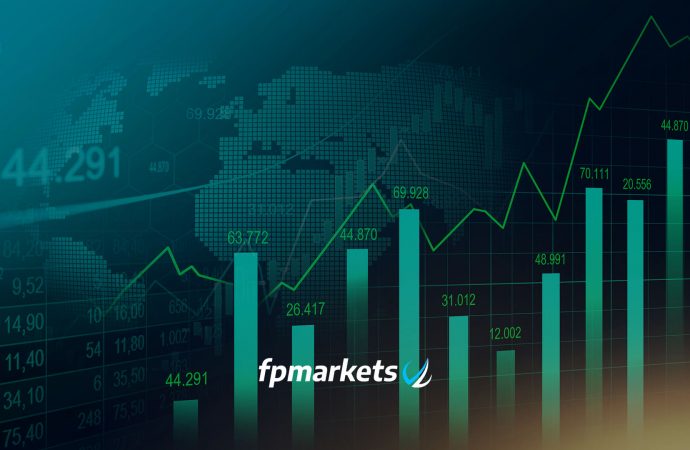 The recent recovery, nevertheless, reclaimed monthly losses, and trades pretty much unchanged as we head into April, formed in the mould of a long-legged doji indecision monthly candle. So, to a degree, we’re now rangebound between the two aforementioned price structures.

Shaped by way of a bearish inside candlestick pattern, EUR/USD snapped a six-day winning streak Monday. Circulating around the 200-day SMA value at 1.1081, sited a few points ahead of supply derived from 1.1239/1.1179 that merges closely with a trendline formation (1.0879), recent movement proposes further downside could be on the cards towards demand at 1.0925/1.0864.

What’s interesting on this timeframe from a technical standpoint is the small demand, the decision point to break 1.1045, at 1.0889/1.0937. This is certainly an area to keep an eye on in the event we revisit lower levels, since sell-stop liquidity beneath Friday’s low makes this an interesting base to bounce price from.

EUR/USD grinded south Monday, following the completion of a 5-wave impulse move, retesting the underside of 1.11 and tunnelling through channel support (1.0784). As of current price, we’re retesting the underside of 1.1050, close by the channel support-turned resistance. The 1.10 handle is in sight as the next possible support target on this timeframe, with a break potentially setting the stage for a move towards the 100-period SMA, followed by H4 demand pencilled in at 1.0889/1.0937 (encapsulates the round number 1.09).

The daily bearish inside candle, as well as H1 price retesting resistance at 1.1050/channel resistance and H4 action showing some leg room to push lower, places sellers in the driving seat it would seem.

Intraday bearish themes off 1.1050 are an option, though may require drilling down to the lower timeframes in order to secure more appealing risk/reward. A break through 1.10 also underlines an additional bearish scenario and has H4 demand in sight at 1.0889/1.0937, glued to the top edge of daily demand at 1.0925/1.0864. 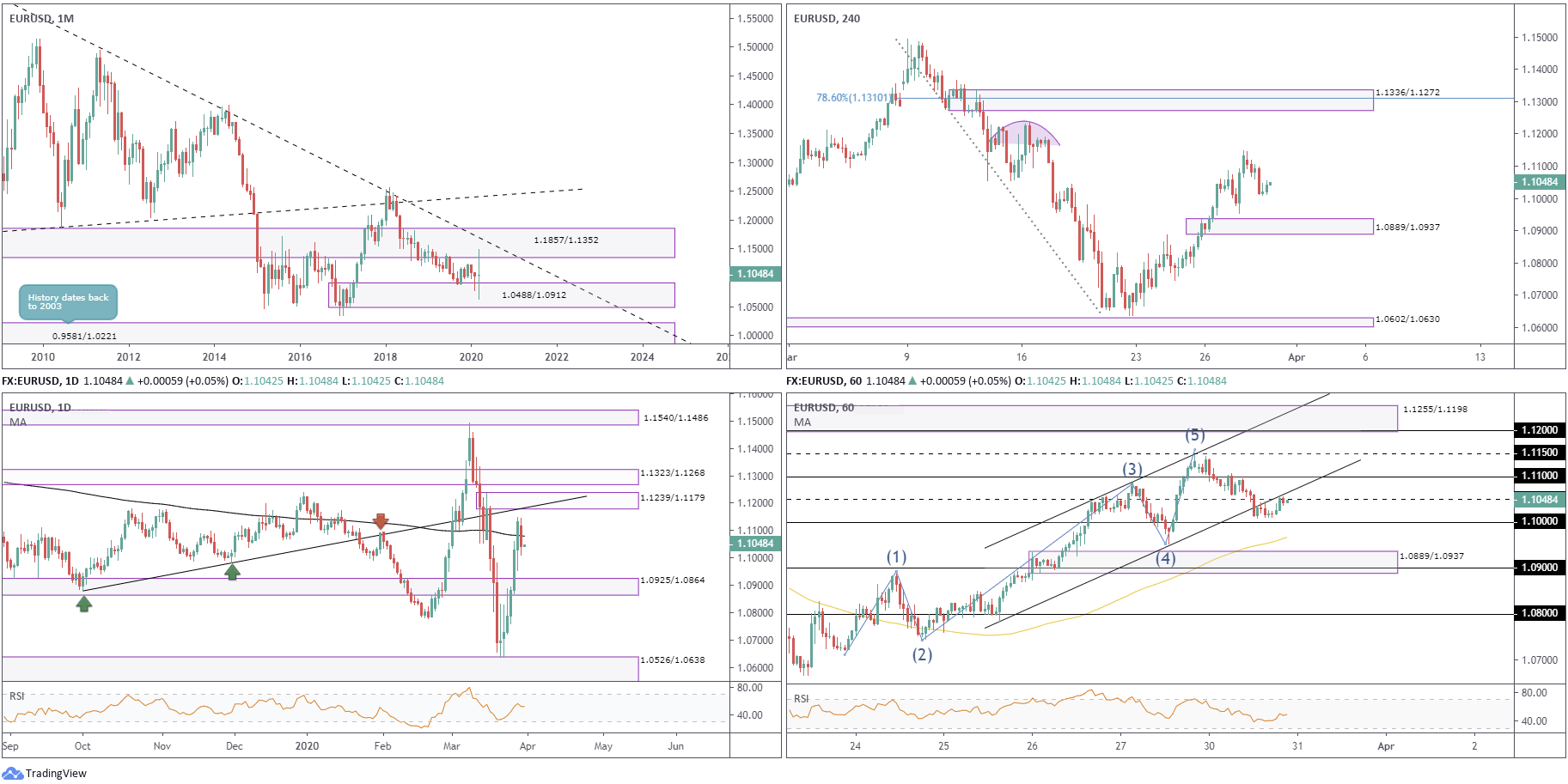 Recent action, however, chalked up an impressive recovery, reclaiming more than 80% of March’s losses, consequently drawing the pair to within striking distance of supply fixed at 0.7029/0.6664, intersecting with a long-term trendline resistance (1.0582).

Supply at 0.6147/0.6078 made a showing Friday, albeit delivering little, before exploring higher ground. As you can see, trendline support (0.5506) was left unchallenged.

Monday produced little in terms of market movement, confined within a narrow range around the top edge of the recently engulfed supply base.

Despite a healthy rebound witnessed out of the US dollar index Monday, AUD/USD emphasised a directionless state, mid-way between the 0.61/2 levels.

Should intraday flow address 0.61 today, traders are urged to pencil in the possibility of a whipsaw to demand at 0.6034/0.6087. Also note, we have the 100-period SMA intersecting with the said demand after recently turning higher.

In addition to the above, a test of 0.61 echoes the possibility of a fakeout play into H1 demand coming in from 0.6034/0.6087. Do bear this in mind if considering bullish themes off 0.61. A bullish hammer candlestick signal that whipsaws through 0.61 into the said demand would, by most technicians, be considered a potential bullish scenario.

March breached the lower edge of the descending triangle, yet has recovered in strong fashion, leaving nearby demand at 96.41/100.81 unchallenged. Note current action also faded the descending triangle’s upper boundary, with the month now trading in neutral territory by way of a long-legged doji candlestick pattern.

Buyers lost grip amid the later stages of last week, after earlier action chalked up back-to-back indecision candlestick patterns ahead of supply at 112.64/112.10. Thursday put in a dominant bearish candle, filling a large portion of its body, with Friday following suit and taking hold of the 200-day SMA value, currently circulating around the 108.30 region.

Monday wrapped up pretty much unchanged, ranging between 108.29/107.12 and forming a doji candlestick pattern, often interpreted as indecision. Traders will note the candlestick configuration was capped by the 200-day SMA at 108.30, suggesting price may step towards demand at 105.70/106.66.

As stated in recent analysis, active buying is unlikely to emerge on this timeframe until crossing paths with the 38.2% Fib retracement at 107.66, which, as you can see, did indeed occur. Though it took a move to lows of 107.12 before buyers stepped in.

Orders surrounding the 108 handle suffered both ends yesterday; breakout buyers’ orders were tripped as were sellers’ buy stops. Although the H1 candles closed the day south of 108, the path north towards demand-turned supply at 108.84/109.23 is reasonably clear, which holds 109 within and has the 100-period SMA heading towards the upper boundary of the said supply.

In view of Monday’s lacklustre performance, the outlook remains unchanged from Monday’s report.

With the 200-day SMA holding as resistance at 108.30, and monthly price offering a somewhat indecisive tone within its descending triangle formation, sellers appear to have the upper hand with eyes on demand at 105.70/106.66.

With longer-term flow echoing a bearish vibe, bearish intraday scenarios might be an idea off the underside of 108 today. H1 demand at 107.07/107.34 is likely next in the firing range as support, with subsequent moves lower targeting 107 and then the top edge of daily demand at 106.66.

Bottoming at lows not seen since the 1980s, ahead of a 127.2% Fib ext. level at 1.1297, March’s candle has staged an impressive recovery and regained approximately 80% of the month’s losses.

Support at 1.1904/1.2235 may, albeit having its lower edge recently shattered, remain relevant should price close the month above its base. Nearby resistance can be seen in the form of a trendline formation (1.7191).

Trendline supports drawn from 1.2373 and 1.2041 continue to serve as a technical ‘floor’ in this market, with price recently going toe-to-toe with an interesting area of supply from 1.2212/1.2075, with the bulls clearly the victor here.

Monday closed in the form of a doji candlestick pattern around the top edge of Friday’s range.

The RSI indicator continues to extend off lows at 17.00, though struggling to gain north of 50.00.

Supply at 1.2520/1.2455 made its debut ahead of the weekly close. Note this area came with additional resistance in the form of a round number at 1.25, a wave 5 completion and the RSI indicator pencilling in bearish divergence from overbought space.

Selling, as underlined in Monday’s analysis, could land 1.24 in view, with a break drawing focus towards channel resistance-turned support (1.1972), and possibly 1.23.

Traders short from the current H1 supply have likely reduced risk to breakeven and banked partial profits. A violation of the current H1 channel support could draw in 1.23, which is likely viewed by many as the next take-profit target, with a break eyeing the top edge of H4 demand at 1.2257, perhaps representing a final take-profit level.