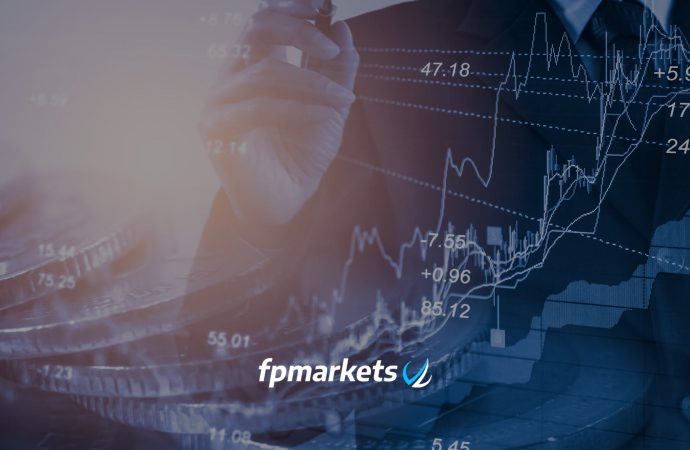 In the early stages of March, price manoeuvred EUR/USD into demand-turned supply at 1.1857/1.1352. Leaving long-term trendline resistance (1.6038) unopposed, the unit reversed gains and burrowed into demand at 1.0488/1.0912. Recent recovery, however, reclaimed the month’s losses, with the monthly candle currently registering unchanged, in the shape of a long-legged doji indecision candle.

Recent upside joined 1.1050, marginally paring gains towards channel resistance-turned support (1.0827). Beyond 1.1050, limited supply is visible until blending with 1.11. Failure to hold off the current channel formation has the key figure 1.10 on the radar.

With reference to the RSI indicator, we are seeing price exit overbought terrain, off recent peaks at 85.20.

Daily price shows we could nudge a touch higher to supply at 1.1120/1.1076 before witnessing moves lower. This suggests a minor whipsaw above the current H4 supply at 1.1038/1.1074 may be in order, despite its Fib confluence.

On account of the above, 1.11 on the H1 may offer resistance today. In case of price toppling 1.10 to the downside (essentially ignoring daily supply), intraday bearish scenarios to H1 demand at 1.0893/1.0932 are an option.

Overwhelmed by the effects of the coronavirus pandemic, demand at 0.6358/0.6839 yielded, scoring seventeen-year lows at 0.5506 ahead of demand pencilled in from 0.5219/0.5426. Recent movement, however, staged a reasonably impressive recovery, reclaiming more than 50% of March’s losses.

With reference to the market’s primary trend, a downtrend has been present since 2011.

Although somewhat lacking conviction, daily candles continue to explore higher ground, registering its fifth daily consecutive gain Thursday and tackling the upper boundary of a demand-turned supply base at 0.5926/0.6062.

From a technical standpoint, the reason behind daily price lacking conviction to the upside likely has something to do with the H4 candles carving out what appears to be a rising wedge pattern (0.5506/0.5963). The pattern’s take-profit target is generally measured by taking the distance of the base and adding it to the breakout point.

Risk currencies latched on to a healthy bid yesterday, largely sponsored by USD downside. Things calmed as we reconnected with familiar supply priced in at 0.6100/0.6063 into US trade. Moves lower from here has the widely watched 0.60 barrier on the radar; a break higher could rejuvenate bids and make a play for the 0.62 handle, having seen limited supply between the current supply and 0.62.

Technical indicators show the RSI working its way out of overbought territory and producing bearish divergence.

In view of analysed charts, research has buyers perhaps leading the way right now. With room to move higher on the monthly chart, daily flow seen attacking the top edge of a demand-turned supply at 0.5926/0.6062 and H1 bears exhibiting a somewhat indifferent tone at the underside of supply from 0.6100/0.6063, a break of 0.61 is likely in store. Whether enough to validate a bullish bias, though, is, of course, trader dependent. Entering long above 0.61 still faces opposition from H4 supply at 0.6147/0.6078 and possibly the upper boundary of the H4 rising wedge formation.

Since the beginning of the week, candlestick analysis emphasised an indecisive tone ahead of supply at 112.64/112.10. Thursday, however, put in a dominant bearish candle, filling a large portion of its body, and is now poised to grip the 200-day SMA value, currently circulating around the 108.31 region.

Technicians will note the ascending triangle formation (black lines 111.47/109.33) had price break to the downside in early trade Thursday and also dethroned channel support (101.18). Active buying is unlikely to emerge on this timeframe until crossing paths with the 38.2% Fib retracement at 107.66.

Starved of support, USD weakness across the board prompted a feisty decline Thursday, upsetting both 111 and 110 levels, with price currently trading within striking distance of 109. Demand, as you can see, is also present at 108.84/109.23, reinforcing the said round number. A violation of the current demand lays the foundation for a possible move to 108.

As a result, a recovery from the current H1 demand at 108.84/109.23 is unlikely to generate much in terms of upside today. A H1 close beneath the zone, therefore, may unlock the door for bearish scenarios to 108.31. 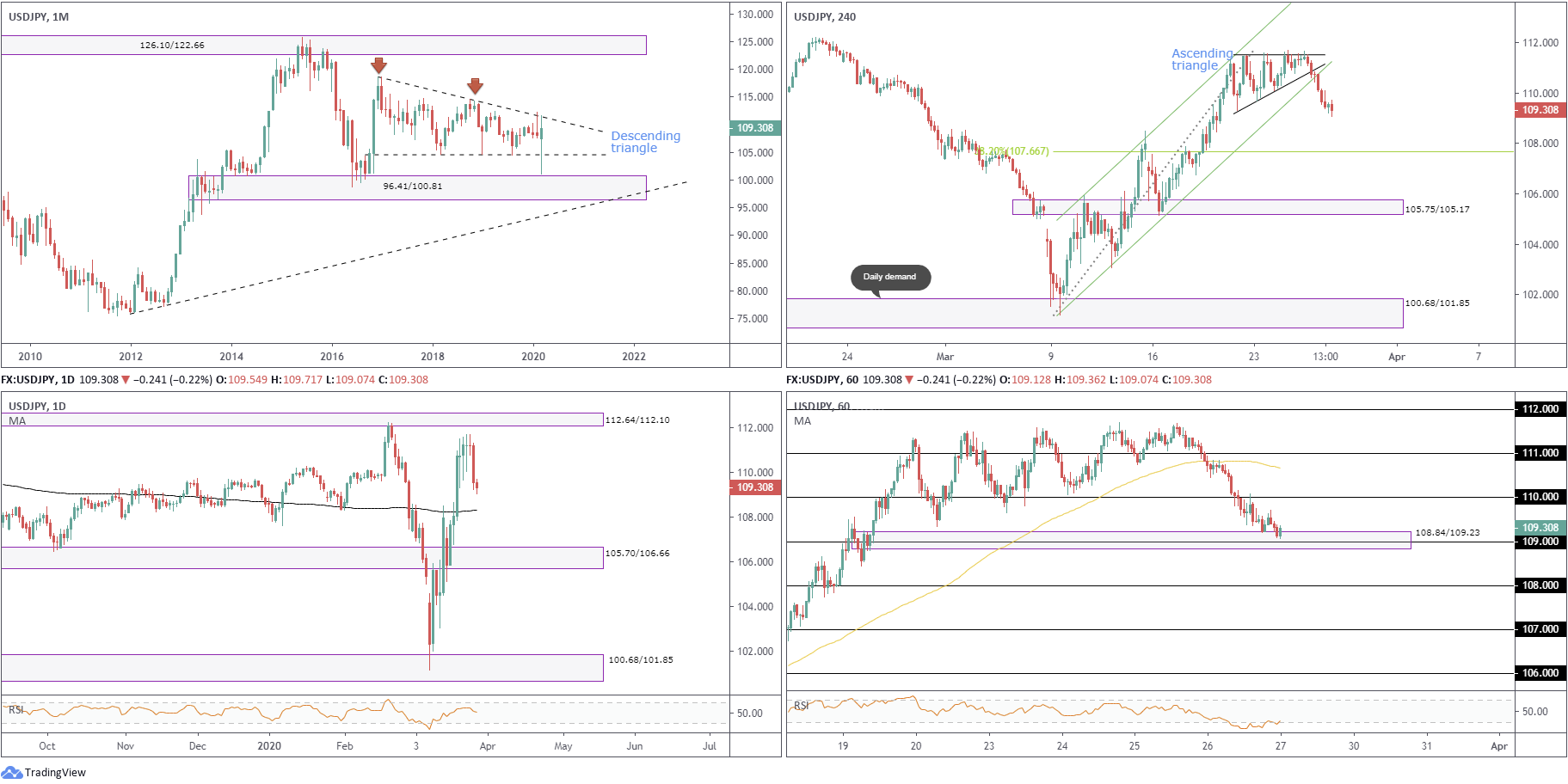 Bottoming at lows not seen since the 1980s, ahead of a 127.2% Fib ext. level at 1.1297, March’s candle is staging an impressive recovery and has regained approximately 50% of the month’s losses.

Support at 1.1904/1.2235 may, despite having its lower edge shattered, remain relevant should price close the month above its base. Nearby resistance can be seen in the form of a trendline formation (1.7191).

Trendline supports drawn from 1.2373 and 1.2041 continue to serve as a technical ‘floor’ in this market, with price recently going toe-to-toe with an interesting area of supply from 1.2212/1.2075. In light of a lacklustre response out of the said supply, traders are urged to pencil in the possibility of moves materialising towards supply at 1.2509/1.2372.

The RSI indicator is seen turning higher from lows at 17.00, currently gaining a foothold above 30.00. The 200-day SMA has also begun turning lower after flattening since November 2019.

UK retail sales as well as the BoE meet was largely overlooked Thursday, with the majority of eyes on the dollar’s decline over rising US jobless claims as a result of the coronavirus spread.

Following a fleeting retest at 1.19, GBP/USD caught a fresh bid into London Thursday, slaughtering 1.20 and 1.21 until confronting supply from 1.2245/1.2192 amid US afternoon trade, which encapsulates 1.22. Sellers currently face channel resistance-turned support (1.1972), with a break of here exposing 1.21 as potential support. Upside beyond the current supply has 1.23 in the firing range, a level which offered reasonably sound S/R mid-March.

Concerning the RSI indicator, momentum appears to be slowing after dipping from peaks at 78.00 to a few points below 70.00.

Seeking bearish themes on a close beneath the current H1 channel support is challenging as the top edge of supply-turned demand at 1.2136/1.2049 on the H4 timeframe leaves little room to manoeuvre.