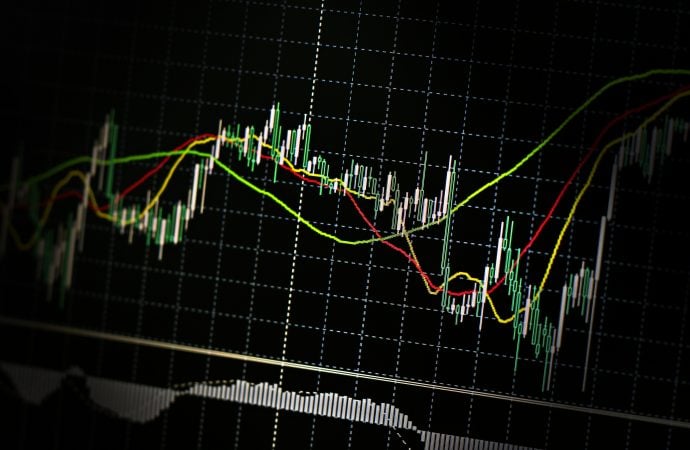 Europe’s shared currency pencilled in another bearish scenario on Thursday amid Eurozone COVID fears, touching near 5-month lows against the greenback.

In terms of the RSI oscillator, bullish divergence is taking shape with the value currently teasing 33.00.

RSI movement, on the other hand, is seen chalking up bullish divergence.

The above may have sellers drill down to lower timeframes today in attempt to secure a bearish position.

Buyers from Quasimodo support at 0.7592 were unconvincing on Thursday. This gave rise to a modest breach, with 0.7592 functioning as resistance.

Demanding attention to the downside is another Quasimodo support at 0.7529.

Demand is seen to the downside at 0.7546/0.7555, converging with the double-top pattern’s take-profit target (yellow).

RSI flow is currently crossing swords with trendline resistance around the 40.00 neighbourhood.

In similar fashion to Wednesday’s technical report, the 4 timeframes analysed remain in a bearish state, according to chart studies.

Following January’s bullish engulfing candle and February’s outperformance, March, up by 2.5 percent, is closing in on descending resistance, etched from the high 118.66. A spirited break of the latter swings the technical pendulum in favour of further upside.

USD/JPY buyers went on the offensive Thursday, in line with the DXY rising above its 200-day simple moving average.

Quasimodo resistance from 109.38 is now within touching distance, with a breach fuelling possible continuation action towards supply at 110.94/110.29.

Based on the RSI oscillator, the value continues to circle overbought space.

With buyers and sellers now squaring off around the upper side of the said range, supply at 109.59/109.37—houses daily Quasimodo resistance at 109.38—could make an entrance today.

With respect to the RSI oscillator, bearish divergence is taking shape out of overbought territory, with further downside to test trendline support.

Shorter term, H4 Quasimodo resistance at 109.16, coupled with the H1 timeframe’s ascending wedge and 100% Fib extension, could spark bearish activity today, targeting 109 (H1). Alternatively, a spike into H1 Fib resistance at 109.31/109.27 could form before sellers make a show (if at all).

The pendulum swung in favour of buyers following December’s 2.5 percent advance, stirring major trendline resistance (2.1161). February followed through to the upside (1.7 percent) and refreshed 2021 highs at 1.4241, levels not seen since 2018. March currently trades lower by 1.4 percent, contained within February’s range.

Sterling outperformed against the dollar Thursday, snapping a two-day bearish phase and closing the session within touching distance of resistance at 1.3755.

Any downside attempts has Quasimodo support at 1.3609 to target.

RSI action rebounded from 36.20, with enough force to possibly have the value retest resistance between 46.21 and 49.16.

Ahead of support at 1.3653, Thursday had price reclaim 1.37+ status and subsequently retested the latter as support. This formed in lockstep with RSI movement breaching trendline resistance and retesting the level as support (now hovering ahead of overbought space).

1.3750 resistance is worth noting, with territory above highlighting trendline resistance, extended from the high 1.4001, and the 100-period simple moving average around 1.3771.