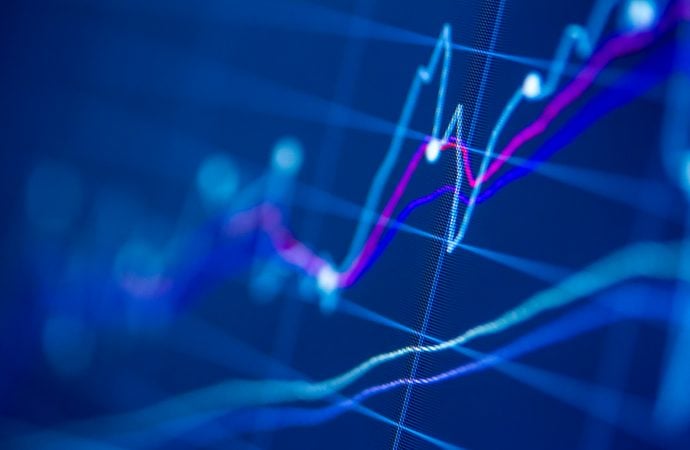 Heading into US hours, H1 price movement dropped under $1.10 and shook hands with support around $1.0972, made up of a 78.6% Fibonacci retracement ratio and a 50.00% level. Another technical observation visible on the H1 timeframe is the prospect of a double-bottom formation from around $1.0972; the pattern’s neckline resides at $1.1045. Against the backdrop of H1 flow, however, technical studies based on the H4 timeframe reveals the unit recently respected trendline resistance (drawn from the high $1.1495), a descending line intersecting closely with the $1.1139-1.1090 supply. Interestingly, the H4 chart exhibits scope to press as far south as support coming in at $1.0903, which happens to unite closely with the psychological figure $1.09 (beneath current H1 support mentioned above at $1.0972).

Out of the bigger picture, weekly channel support, extended from the low $1.1186 (arranged north of weekly Quasimodo support at $1.0778), remains a technical ‘floor’ for the time being. Weekly resistance calls for attention at $1.1174. The aforementioned level is a particularly prominent barrier, well-positioned within the current trend. The longer-term trend has reflected bearish status since topping at $1.2350 at the beginning of January (2021). This is reinforced by a weekly trendline support breach, drawn from the low $1.0636, together with the break of the $1.1602 November 2020 low (circled) and the pair refreshing year-to-date lows at $1.0806.

Closely joining weekly resistance at $1.1174 is daily resistance at $1.1224. Chart space north of the level unearths area to daily resistance at $1.1483 (located nearby the 200-day simple moving average at $1.1515). A familiar daily decision point at $1.0788-1.0854 remains on the radar to the downside (as well as an intersecting ascending support, drawn from the $1.0340 3rd January low 2017—price has traded under this value since mid-June). An additional study on the daily scale is the relative strength index (RSI) poised to connect with the lower side of the 50.00 centreline. Voyaging above 50.00 reveals positive momentum (average gains exceeding average losses) and suggests an approach to weekly and daily resistances ($1.1174-1.1224).

While the H4 timeframe demonstrates space to travel towards the $1.09 neighbourhood, both weekly and daily timeframes show room to reach for resistance between $1.1174-1.1224. With that in mind, upside could gain speed north of $1.10 and overthrow the H1 double-bottom pattern’s neckline at $1.1045, action forecasting further outperformance to at least $1.11.

Latest developments on AUD/USD shows the currency pair sailed above trendline resistance on the daily timeframe, drawn from the high $0.8007. Technical expectations shine the spotlight on the possibility of a continuation run towards $0.7660. As you can see, the double-bottom pattern ($0.6991) had its neckline taken ($0.7314) in early March, with the pattern drawing attention to its profit objective at $0.7660. Upside momentum is lacking energy, nonetheless. According to the relative strength index (RSI), despite a clean rebound from the 50.00 centreline, has yet to engulf the high 68.24 formed on 4th March. Consequently, bearish divergence could eventually emerge. Overbought territory may also be challenged, with indicator resistance from 74.80 of particular importance.

In terms of the weekly timeframe, buyers eventually regained consciousness within prime support at $0.6948-0.7242 and led action to resistance from $0.7501. Weekly prime resistance at $0.7849-0.7599 also warrants focus, having seen the daily timeframe’s double-bottom pattern profit objective residing within the area at $0.7660. The trend, however, appears to be averse to the idea of surpassing the noted resistance levels on the weekly scale. Longer term—the monthly timeframe—has portrayed a downtrend since August 2011, suggesting the 12.6 percent correction from mid-Feb tops at $0.8007 (2021) on the weekly timeframe might be the start of a bearish phase and not a dip-buying correction from the 2021 advance from pandemic lows of $0.5506. This highlights a possible bearish scene from $0.7051 resistance or prime resistance at $0.7849-0.7599. If a $0.6948-0.7242 break lower should come to pass, weekly support at $0.6673 and a 50% retracement at $0.6764 are observable.

Meanwhile, on the H4 timeframe, Quasimodo support-turned resistance put in an appearance on Wednesday at $0.7501. Technically this level shares chart space with the weekly timeframe’s current resistance, yet should a $.7501 break take shape on the H4, Quasimodo resistance is seen at $0.7527. From the H1 timeframe, on the other hand, price reclaimed position above $0.75 and is on the verge of bringing in prime resistance at $0.7529-0.7517.

Up 1.7 percent on the week and refreshing multi-year pinnacles at ¥121.41 led price action on the weekly timeframe to a 100% Fibonacci projection at ¥121.14 (harboured under a deep 88.6% Fibonacci retracement ratio at ¥122.76). Despite testing longer-term resistance, it’s important to remain cognisant of where we are regarding trend studies. The overall longer-term trend has been climbing since 2012 (check monthly timeframe). The 21.5 percent correction from June 2015 to June 2016 provided a dip-buying opportunity, as did a subsequent 14.8 percent correction from December 2016 to pandemic lows formed early March 2020. Overall, the primary trend is higher, with the secondary trend promoting additional advances.

The daily chart wrapped up the session in a solid position, climbing for a fourth consecutive session and swinging the technical pendulum in favour of connecting with Quasimodo resistance at ¥121.78. Additional technical notes show the relative strength index (RSI) is high within overbought terrain. Traders are urged to exercise caution, however, as amidst trending environments the RSI can remain within overbought space for prolonged periods and cause a number of false bearish signals

Coming in from the H4 timeframe, technical structure has buyers and sellers squaring off within prime resistance at ¥121.44-120.89. Support at ¥120.06-119-57 is a possibility should sellers respond to current resistance, which, according to the weekly timeframe, is touching gloves with the 100% Fibonacci projection (resistance) at ¥121.14, and could well encourage a bearish scene from current levels.  Supporting buyers, nevertheless, is the H1 timeframe’s decision point at ¥120.52-120.83 and a subsequent price close above ¥121. Below the aforementioned supports, ¥120 is a reasonable downside objective, enclosed within a decision point from ¥119.81-120.06.

Buying remains questionable on GBP/USD. Not only is the trend to likely weigh on upside efforts, prime resistance is a focal point on the weekly timeframe at $1.3473-1.3203 with the chart demonstrating scope to drop as far south as weekly support from $1.2719. Trend direction has been southbound since late 2007 tops at $2.1161. As a result, the 25 percent move from pandemic lows in March 2020 to February 2021 might be viewed as a pullback within the larger downtrend. This, of course, places a question mark on the 8.5 percent ‘correction’ from February 2021 to March 2022; it may in fact be the beginning of a longer-term push to the downside and not a dip-buying scenario.

Based on daily analysis, nevertheless, GBP/USD continues to work with space north of a recently engulfed resistance from $1.3082. Should the latter pencil in support, this builds a foundation to test resistance at $1.3355. Unsupportive of follow-through buying, of course, is the relative strength index (RSI), seen modestly levelling off ahead of the key 50.00 centreline. For any longer-term trend followers watching the longer-dated moving averages, you will also note the currency pair continues to operate south of the 200-day simple moving average at $1.3584—a (technical) bearish view.

Lower on the curve, H4 price movement is retesting resistance-turned support from $1.3194. This follows a mid-March break of a falling wedge formation (drawn between $1.3620 and $1.3273). Although there is not a ‘textbook’ pattern profit objective for a falling wedge pattern, many simply measure the base distance and extend this range from the breakout point. As you can see, this charts a take-profit level (green horizontal rectangles) to Quasimodo support-turned resistance at $1.3436 (sited above a decision point at $1.3358-1.3328).

In recent hours on the H1 chart, price action whipsawed through $1.32 (likely causing damage given the early bear-trap play) and came within a whisker of testing trendline support, extended from the low $1.3000. Feeding off H4 support at $1.3194, H1 buyers could maintain position above $1.32 and perhaps attempt to challenge Quasimodo resistance at $1.3274.

As a result, upside from noted supports on H1 and H4 timeframes might be limited and may see a H1 trendline support breach unfold as we head into more liquid sessions today.