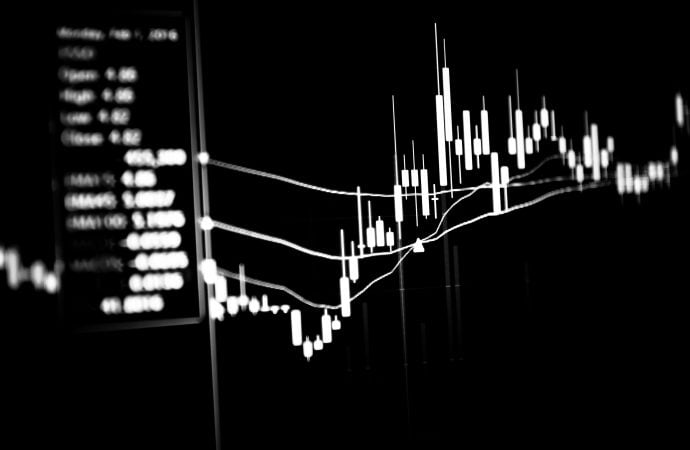 South of this support, Quasimodo support at 1.1688 deserves notice.

As for the RSI oscillator, trendline resistance is within touching distance.

Below 1.1818/1.1860, the double-top pattern’s take-profit target (yellow) forms at 1.1774 (measured by taking the distance from the highest peak in the pattern to the neckline and extending this measurement to the downside at the breakout point).

In terms of the RSI, the value entered oversold territory and is currently seen closing in on support at 20.64.

The question, of course, is whether the noted support is contains sufficient fuel to spark a bullish recovery.

March, as you can probably see, trades lower by 1.1 percent, bound for the lower limit of February’s range.

Sustained weakness has February’s low at 0.7563 to target, with subsequent downside perhaps taking aim at demand from 0.7453/0.7384 (previous supply).

RSI movement inched back under the 50.00 centreline in recent trade, indicating a test of oversold space could be on the cards.

Between 0.7600 and 0.7622 (yellow), a support zone formed, made up of Fibonacci studies and traditional horizontal levels. Joined by RSI support at 19.40, reclaiming price-based resistance at 0.7636—a previous Quasimodo support level—could emerge today, with 0.77 then possibly to call for attention.

Longer term, both the monthly and daily timeframes note a bearish vibe, targeting at least February’s low from 0.7563. Across the page, short-term action demonstrates a supportive tone. 0.7600/0.7622 support is evident on the H1 scale, dovetailing with H4 Demand at 0.7601/0.7627.

The above suggests a pullback from the H1/H4 supports today, targeting 0.77. However, buyers will likely be mindful of the bigger picture and, as a result, may look to reduce risk to breakeven as soon as logically possible.

Following January’s bullish engulfing candle and February’s outperformance, March, up by 1.9 percent, is closing in on descending resistance, etched from the high 118.66. A spirited break of the latter swings the technical pendulum in favour of further upside.

Buyers and sellers continue to square off south of Quasimodo resistance from 109.38. Of particular interest is the Quasimodo formation fusing closely with the monthly timeframe’s descending resistance.

Based on the RSI oscillator, the value exited overbought space, leaving resistance at 83.02 unchallenged.

Demand at 108.67/108.78 (considered an important zone given it was here a decision was made to initially break through 109 offers) continued to echo signs of weakness Monday. Having its lower side clipped twice last week and again yesterday, as well as H1 defending the underside of 109 and 100-period simple moving average, this suggests downside risks are building.

As evident from the chart, price took on demand at 108.67/108.78 and bottomed just north of support at 108.36 before retesting demand as supply (yellow). Technically, the reason behind failing to reach the aforementioned support is likely due to H4 demand at 108.31/108.50.

The pendulum swung in favour of buyers following December’s 2.5 percent advance, stirring major trendline resistance (2.1161). February followed through to the upside (1.7 percent) and refreshed 2021 highs at 1.4241, levels not seen since 2018. March currently trades lower by 1.3 percent, contained within February’s range.

Tuesday’s 0.9 percent depreciation, movement closing at session lows, overwhelmed bids around trendline support, taken from the low 1.1409, and took the currency pair to support at 1.3755. While a reaction could form off this support, traders are urged to pencil in Quasimodo support at 1.3609 should sellers remain at the wheel.

Interestingly, RSI flow dipped beneath support between 46.21 and 49.16, with the value currently trading around 40.00.

After establishing a defence around the lower side of 1.38 psychological resistance heading into US hours on Tuesday, the session ended testing the mettle of 1.3750 support (representing the upper edge of H4 demand at 1.3730/1.3749).

Forming early bullish divergence out of the RSI, buyers could attempt to form a floor off 1.3750 today. Failure to hold throws light on Quasimodo support at 1.3711.