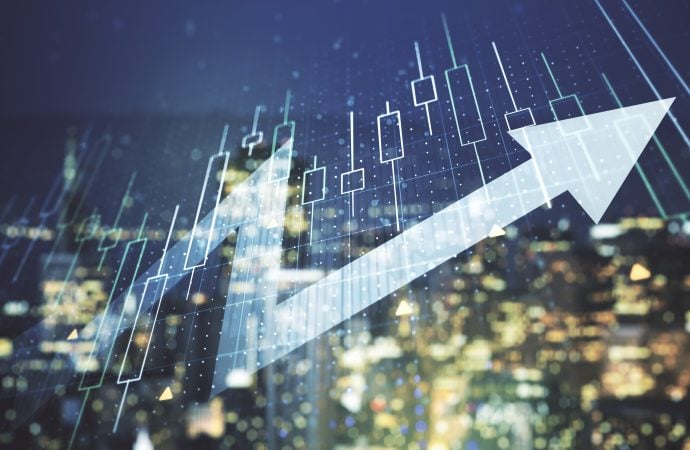 Since March 11, buyers and sellers have been battling for position around support priced in at 1.1887.

Monday, however, witnessed buyers stage a one-sided recovery, with the US dollar index fading best levels.

H4 pattern traders will note the currency pair dipped a toe in waters south of a double-top pattern’s neckline at 1.1882, following the modest bearish opening gap. However, price FAILED to CLOSE beneath the level, therefore technical sellers are unlikely to have committed here.

Subsequent action observed Europe’s shared currency rally against the buck, throwing 1.1992 back in the pot as potential resistance.

1.1881/1.1865 demand welcomed price action early Monday and provided a platform for buyers to overthrow the 1.19 figure. Following a swift retest of the psychological level (a common theme after a round number breach which, in this case, shaped interesting demand at 1.1894/1.1906), price charged above the 100-period simple moving average and also retested the dynamic value before sailing to tops just south of 1.1950 resistance.

Interestingly, RSI movement claimed resistance at 54.40 yesterday and is currently hovering just ahead of overbought space.

Knowing we’re working with a higher timeframe bullish vibe this week, H1 buyers could attempt to hold 1.19 and dethrone the 100-period simple moving average. Alternatively, a dip into H1 demand from 1.1851/1.1867 may emerge before a bullish theme forms as it shares space with H4 support at 1.1818/1.1860.

As evident from the H1, we did manage to take on the 100-period simple moving average on Monday.

Going forward, H1 demand at 1.1894/1.1906 is likely to draw interest today (should we retreat and test the zone), in light of the higher timeframe’s bullish tone and room to move higher on the H4.

March, as you can probably see, trades higher by 0.5 percent, and remains within February’s range.

The daily chart’s technical construction reveals a trendline support-turned resistance, taken from the low 0.5506. Despite the trendline support breach early March, the chart has yet to form a DECISIVE lower low. For that reason, the trend remains to the upside.

RSI followers will note the value continues to test the grip of the 50.00 centreline, following 42.00 lows formed March 8.

The Quasimodo formation at 0.7710, alongside a 61.8% Fib level at 0.7708, served buyers well as support in opening trade Monday. Despite subsequent attempts to probe lower and test 0.77, bids remained solid, eventually paving the way north to challenge the 100-period simple moving average heading into the US session.

Assuming tops around 0.7772 prove fragile, rupturing the aforesaid SMA could lead the currency pair back to 0.78.

Also worth taking on board, of course, is the RSI climbing above resistance plotted at 54.51, a level demonstrating strong historical significance as an S/R base. This, assuming the value holds higher, suggests further momentum to the upside could be on the cards.

As you can see, the market did indeed discover a floor off 0.7710 and reach for the 100-period simple moving average on the H1 which may prove difficult for buyers today. Nevertheless, should price clear offers around this region, increased upside could be seen, targeting 0.78.

Following January’s bullish engulfing candle and February’s outperformance, March, up by 2.2 percent, is closing in on descending resistance, etched from the high 118.66. A spirited break of the latter swings the technical pendulum in favour of further upside.

Buyers and sellers continue to square off just south of Quasimodo resistance from 109.38. Of particular interest is the Quasimodo formation fusing closely with the monthly timeframe’s descending resistance.

Based on the RSI oscillator, the value remains within overbought space, beneath resistance at 83.02 (the value exiting overbought will add more conviction).

The Quasimodo formation at 109.16 proved stubborn resistance last week, shutting down any attempts to shake hands with supply at 109.59/109.37. Notably, the supply houses daily Quasimodo resistance at 109.38.

Demand at 108.67/108.78 (considered an important zone given it was here a decision was made to initially break through 109 offers) continued to echo signs of weakness Monday. Having its lower side clipped twice last week and again yesterday, as well as H1 defending the underside of 109 and 100-period simple moving average, this suggests downside risks are building.

Below demand signals the pair could test support at 108.36, a base withstanding a number of downside attempts earlier in March.

RSI followers will also acknowledge trendline resistance is close by, despite the value pursuing terrain north of the 50.00 centreline at the moment.

Current focus on the bigger picture is daily Quasimodo resistance at 109.38 and monthly descending resistance. However, as aired in recent analysis, before sellers attempt to put in an appearance, a whipsaw to daily supply at 110.94/110.29 could develop.

The pendulum swung in favour of buyers following December’s 2.5 percent advance, stirring major trendline resistance (2.1161). February followed through to the upside (1.7 percent) and refreshed 2021 highs at 1.4241, levels not seen since 2018. March currently trades lower by 0.5 percent, contained within February’s range.

The trend has faced higher since early 2020.

The RSI indicator continues to test the mettle of support between 46.21 and 49.16, with the value trading below the 50.00 centreline since Friday.

Quasimodo resistance at 1.4007—aligns with a 50.00% retracement—remains an interesting base to the upside, forming a ceiling since early March.

Monday left behind a muted tone; therefore, the technical framework remains unmoved on this timeframe.

Should the unit leave the aforesaid resistances unchallenged and push lower, technical elements point to a test of 1.38, a level shadowed by a Quasimodo support from 1.3786 and a 161.8% Fib extension at 1.3782.

Given the above, H4 coming off support from 1.3852, aided by daily trendline support and monthly flexing its muscle north of trendline resistance, could see buyers make an entrance and attempt to tackle 1.39 on the H1, possibly followed by H1 supply at 1.3938/1.3918.