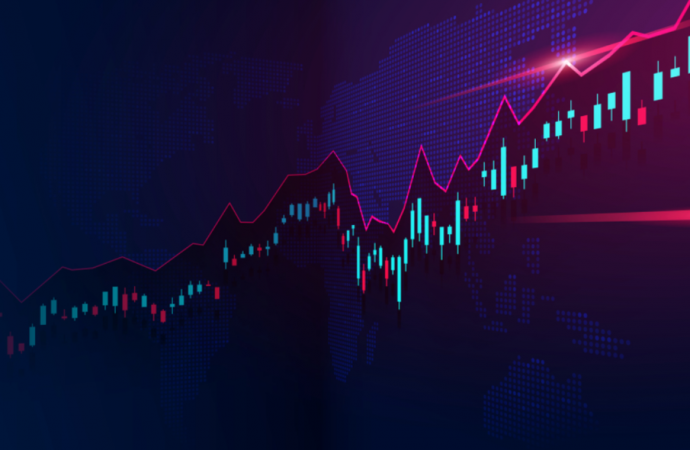 March, as you can see, remains toying with the upper side of 1.1857/1.1352 demand, with the month lower by 1.3 percent. Price action traders will have noted the demand test, likely viewing this as a bullish signal. A decisive rebound from the aforesaid demand shifts attention back to the possibility of fresh 2021 peaks and a test of ascending resistance (prior support – 1.1641).

Higher on the curve throws the 38.2% Fib level at 1.2021 in the mix. It is also worth acknowledging the trend on this timeframe has faced north since 2020.

Heading into US hours Thursday, short-term flow dipped a toe in waters south of the 100-period simple moving average and subsequently retested the lower side of the dynamic value and held as resistance. Technically speaking, this paves the way for a possible test of 1.19, a level attached above demand at 1.1881/1.1865.

As for the RSI oscillator, we remain circling space beneath the 50.00 centreline, following a decisive rotation out of overbought territory earlier in the day. Testing oversold levels could also lead to a move into support from 20.64.

The H1 zone, therefore, may welcome a bullish scenario, targeting at least 1.1950 resistance.

March, as you can probably see, trades higher by 0.7 percent, and remains within February’s range.

Should sellers continue to dominate, February’s low at 0.7563 deserves attention as a logical support target, with subsequent downside perhaps taking aim at demand from 0.7453/0.7384 (previous supply).

Continued downside today is likely to cross swords with demand at 0.7696/0.7715. Though having seen recent activity test the range of this area on a number of occasions, it may be fragile and could underline a test of demand at 0.7601/0.7627.

AUD/USD settled Thursday around the 100-period simple moving average at 0.7756, following a break of 0.78 support and subsequent retest as resistance. A break beneath the aforesaid SMA highlights 0.77 support.

The monthly timeframe’s bearish stance, the daily timeframe turning south of trendline resistance, and the H4 showing space to move to at least 0.7696/0.7715, implies we’re possibly heading below the 100-period simple moving average on the H1 to test 0.77 (located within the noted H4 demand).

Following January’s bullish engulfing candle and further outperformance in February, March is seen closing in (up by 2.3 percent) on descending resistance, etched from the high 118.66.

USD/JPY, as you can see, continues to hold south of Quasimodo resistance from 109.38. Of particular note is the Quasimodo formation closely fuses with the monthly timeframe’s descending resistance.

Based on the RSI oscillator, the value remains within overbought space, hovering beneath resistance at 83.02.

Short-term action Thursday spent the session rejecting trendline support-turned resistance, taken from the low 104.92, and wrapped up south of the 109 figure.

Also of technical significance on this chart is demand at 108.67/108.78 (considered an important zone given it was here a decision was made to initially break through 109 offers) received a spike to its lower side, possibly squeezing out some buyers and triggered breakout sell orders (sell-stops).

The break of demand signals the pair could drop to test support at 108.36.

Longer term, with daily Quasimodo resistance at 109.38 and the monthly timeframe’s descending resistance forming a close connection, this area may welcome selling if tested. However, before sellers put in an appearance, a whipsaw to daily supply at 110.94/110.29 could take shape.

February followed through to the upside (1.7 percent) and refreshed 2021 highs at 1.4241, levels not seen since 2018. March, on the other hand, has so far been lacklustre: flat, as of current price.

The BoE rate decision was largely overlooked on the charts. Technically, though, we remain hovering north of trendline support, drawn from the low 1.1409, an ascending line closely shadowed by support coming in at 1.3755.

Quasimodo resistance drawn from 1.4250 is worth a shout, should buyers maintain a bullish theme, while territory beneath 1.3755 elbows Quasimodo support at 1.3609 in the line of fire.

Chart research reveals GBP/USD came within a whisker of testing Quasimodo resistance at 1.4007 (aligns with a 50.00% retracement) on Thursday, before recoiling to lower territory.

Transitioning into European hours on Thursday observed the pair shake hands with the 1.40 figure, a resistance that merges with a 161.8% Fib projection and has capped upside since late February.

Subsequent downside yesterday nosedived into 1.39 and the 100-period simple moving average around 1.3908, which, as you can see, echoed a supportive tone, aided by RSI movement bouncing off trendline support, as we moved into the US session. Technicians will also note a Quasimodo support resides under 1.39 at 1.3878.

Shorter-term price action on the H1 timeframe shows price bouncing off 1.39. Though beneath this big figure, Quasimodo support at 1.3878 is seen, which could tempt a whipsaw scenario. Should price spike below 1.39, this may feed buying as sell-stop market orders hit (fill) limit buy orders at 1.3878.