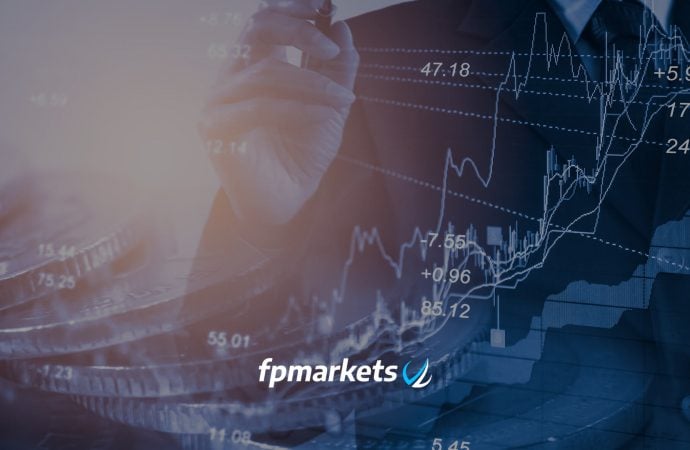 March, as you can see, manoeuvred the pair into demand-turned supply at 1.1857/1.1352. Leaving long-term trendline resistance (1.6038) unchallenged, price reversed and is now on track to chalk up a shooting star bearish candlestick signal and potentially revisit demand mentioned above at 1.0488/1.0912.

What’s also notable from a technical perspective is the RSI indicator recently exiting overbought levels, fading peaks at 82.00 (values not seen since March 2008).

Having shown resilience from demand at 1.1038/1.1072 late last week and again Monday (considered significant given it was likely the decision point to break the 1.1095 January 31st high), the candles revisited the underside of a demand-turned supply at 1.1218/1.1245 for a second time Monday and held ground. In light of this, a range between the two said structures is visibly forming.

Should we eventually form another leg down, traders’ crosshairs will likely be fixed on 1.1005/1.0979 as potential demand, whereas a move through the upper edge of the current range has supply at 1.1332/1.1298 to target.

It was quite a day Monday.

In a surprise move Sunday night, the Federal Reserve cut short-term interest rates by 100bps to 0.00%-0.25% via a 9-1 vote, and the Fed launched a USD 700bln QE program. This, however, failed to impress markets as global equities plunged. On the data front, we also had a dreadful NY Empire State Manufacturing Index print. According to the Federal Reserve Bank of New York, business activity declined in New York State, according to firms responding to the March 2020 Empire State Manufacturing Survey. The headline general business conditions index fell thirty-four points to -21.5, its lowest level since 2009.

From a technical standpoint, price rushed through 1.12 in early London Monday, tripping buy-stop liquidity and testing channel resistance (1.1199) that merged beautifully with a trendline resistance (1.1366) and the 100-period SMA. The 1.11 handle also remained supportive yesterday, lifting the H1 candles to within striking distance of 1.12, ahead of the close. Note also the aforementioned trendline resistance (yellow) aligns closely with 1.12.

Monthly price portends lower moves, placing a question mark on the 200-day SMA and 61.8% Fib retracement at 1.1051 on the daily timeframe as potential support, despite yesterday’s recovery. Daily demand at 1.0940/1.1002, therefore, may come forward sometime this week, though also faces opposition from the monthly timeframe.

With monthly technicals portending moves lower, and H4 action showing room to replenish its range to demand at 1.1038/1.1072, intraday sellers may find use in 1.12 today given its close relationship with trendline resistance.

In terms of the RSI indicator, given the predominant downtrend in this market, the value continues to run through oversold terrain, unable to breach 50.0 to the upside.

March, so far, breached the lower edge of the descending triangle, yet has recovered in reasonably strong fashion, leaving nearby demand at 96.41/100.81 unchallenged. Note current action trades in the shape of a hammer candlestick signal.

Recent upside saw action address a 61.8% Fib retracement at 108.02 and 200-day SMA, currently circulating around 108.25. While this combination capped upside Monday, a resurgence of bidding could eventually nudge towards demand-turned supply at 110.10/109.52. This is a significant area knowing it is the origin of the move to highs at 112.22 and the decision point to cross above the 110.29 January 17th high. Continued selling, on the other hand, display’s limited support until reaching demand coming in at 100.68/101.85, an area extended from September 2016 and glued to the top edge of the current monthly demand zone.

Friday navigating higher ground produced the final D-leg to an AB=CD bearish pattern, terminating around 108.08. Traditional take-profit targets associated with AB=CD formations generally reside around the 38.2% and 61.8% Fib retracement levels of legs A-D – in this case, at 105.67 and 103.93. As you can see, 105.67 along with a supply-turned demand zone at 105.75/105.17 entered the fold Monday and, for now, offers support. The second take-profit target out of the AB=CD formation remains intact at 103.93.

Even after the Federal Reserve embarked on huge monetary stimulus, global equities plummeted Monday, consequently increasing demand for the safe-haven Japanese yen. The week kicked off with a downward gap, south of supply at 108.89/108.50 and channel resistance (105.91), that prompted moves to lows just south of 106. 107 was later tested and held, which was followed by moves below 106 to the 100-period SMA, stationed a touch above 105 and a 127.2% Fib ext. level at 104.97.

The day ended marginally south of 105, though early Asia is seeing bulls attempt to clinch a foothold north of the figure. The RSI, for those who follow momentum-based indicators, recently crossed through 50.00, indicating a bullish bias on this intraday timeframe.

Whether this will be enough to induce selling is difficult to judge since there’s an awful lot of support to overcome on the H1 timeframe, including a reasonably long-term channel support (101.18). 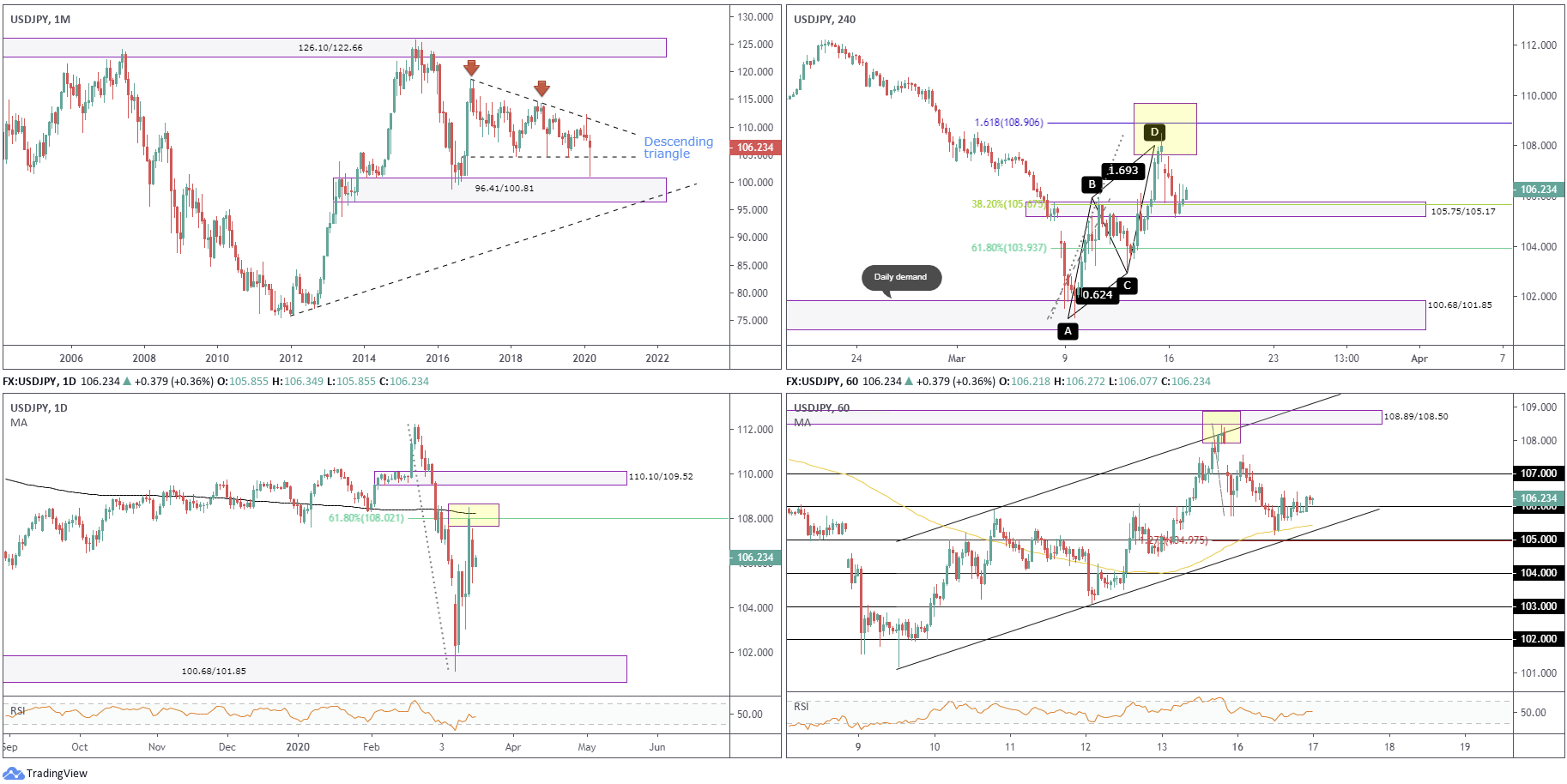 With respect to the RSI indicator, the unit remains within oversold waters, though appears to be flattening.

Despite an optimistic start to the week, things quickly turned sour after price action prodded a demand-turned supply zone at 1.2405/1.2460. Price proceeded lower, formed within the limits of a descending channel formation (green – 1.2420/1.2284), tunnelling through 1.23 and bottoming north of 1.22 by a handful of points.

While technical structure remains compressing within the said descending channel pattern, traders are urged to consider the larger descending channel configuration in play (black 1.2964/1.2490). Another support point worthy of note is the 127.2% Fib ext. at 1.2163.

While the market’s trend exhibits a strong bearish tone right now, monthly, daily and H4 timeframes show supportive structures in play. With this being the case, a stop run south of 1.22 could occur today, testing the 127.2% Fib ext. at 1.2163, for an advance back above 1.22, targeting the current H1 channel resistances and 1.23.