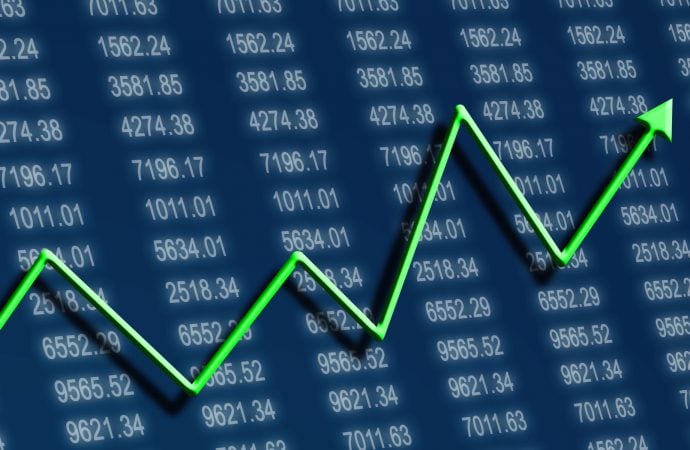 US equities navigated higher on Tuesday amid plummeting oil prices. WTI engulfed $100 a barrel with Brent ‘testing the waters’ beneath the $100 threshold. The US Dollar Index (USDX) also recovered off worst levels (98.64), consequently weighing on EUR/USD from session highs at $1.1020.

Channel support, extended from the low $1.1186, remains a talking point on the weekly timeframe. Initial enthusiasm from the descending line has deteriorated, emphasising that weekly resistance from $1.1174 is likely to be left unchallenged. Quasimodo support at $1.0778 also remains a level in the spotlight on the weekly timeframe, claiming position under channel support.

Absence of interest from weekly channel support could be a result of trend direction. Recent analysis underlined the following:

The longer-term trend has reflected a bearish status since topping at $1.2350 at the beginning of January (2021). This is reinforced by a weekly trendline support breach, drawn from the low $1.0636, together with the break of the $1.1602 November 2020 low (circled) and the currency pair refreshing year-to-date lows last week at $1.0806.

The H4 timeframe continues to work closely with support priced in at $1.0903. Note that while this level shares chart space with the weekly timeframe’s channel support, the lack of buying has seen H4 supply at $1.1139-1.1090 unopposed. For those who read Tuesday’s technical briefing you may recall technical studies highlighted the prospect of a whipsaw above $1.10 to H1 Quasimodo resistance at $1.1019. As evident from Tuesday’s price movement, price did indeed whipsaw the psychological level and fade $1.1019. Prompting a decisive sell during US hours, the currency pair is now fast approaching $1.09, which has H1 Fibonacci support residing directly beneath between $1.0843 and $1.0878 (yellow).

Bids and offers ended the market about even on Tuesday.

Technical structure on the weekly timeframe has price within the walls of prime support from $0.6968-0.7242, which continues to display a fragile tone. Weekly resistance at $0.7501 and prime resistance from $0.7849-0.7599 remain untested.

This is where we are in terms of the currency pair’s trend:

In light of Tuesday’s lacklustre performance, we remain unchanged regarding the daily timeframe:

Trendline resistance on the daily timeframe, drawn from the high $0.8007, holding firm at the beginning of last week, and the unit subsequently crossing under the 200-day simple moving average at $0.7306, underpins the bearish setting visible on the weekly timeframe. A familiar decision point from $0.6964-0.7040 may now re-enter the fight. Momentum studies, according to the relative strength index (RSI), also witnessed action pull the indicator’s value south of the 50.00 centreline, showing negative momentum for now.

The H4 timeframe had price shake hands with trendline support, taken from the low $0.6968. Derailing this ascending line, however, unearths a harmonic bat pattern’s PRZ (potential reversal zone) between $0.7109 and $0.7149 (note that we included a 61.8% Fibonacci retracement within the PRZ at $0.7149, as well as a Quasimodo support from $0.7109, which define the zone). Based on the H1 timeframe, candle action is exploring space south of $0.72 and is within reach of support at $0.7169.

AUD/USD extending position beneath the 200-day simple moving average should not surprise, according to the longer-term trend. In conjunction with this, a H4 trendline support breach could be seen, consequently leading the candles to the harmonic bat pattern’s PRZ between $0.7109 and $0.7149 (yellow). Although the trend points lower, the harmonic zone is likely to remain on buyers’ watchlists.

Should the above come to fruition and we do explore under H4 trendline support, the $0.7150 level is a location H1 players could hone in on.

In conjunction with the daily timeframe’s relative strength index (RSI) entering overbought terrain, upside momentum begun to peter out around YTD pinnacles on Tuesday. The slowdown could be due to the weekly timeframe closing in on resistance from ¥118.64, shadowed closely by a 1.618% Fibonacci projection at $119.77 and a channel resistance, pencilled in from the high ¥110.97. However, in support of additional upside, the currency pair has been stepping higher since early 2021, clearly visible on the weekly timeframe within an ascending channel (¥102.59-¥110.97). In line with this, the overall longer-term trend has been climbing since 2012 (check monthly timeframe). The 21.5 percent correction from June 2015 to June 2016 provided a dip-buying opportunity, as did a subsequent 14.8 percent correction from December 2016 to pandemic lows formed early March 2020. Overall, the primary trend is higher, with the secondary trend promoting additional advances.

As evident from the daily timeframe, you may recall price ruptured the upper limit of an ascending triangle formation last week (Quasimodo resistance at ¥116.33). Toppling ¥116.33 allows analysts to chart a pattern profit objective by extending the ‘base’ distance (blue vertical box) from the breakout point to ¥120.11. This, along with the trend, informs market participants that USD/JPY may attempt to confront (and overthrow) noted weekly resistances. An alternative scenario, nonetheless, is price responding from weekly resistances and retesting ¥116.33 to draw a dip-buying theme in line with the current trend.

Weekly resistance is likely to make a show between ¥119.77 and ¥118.64. Whether this area contains enough fuel to derail the trend and stop daily price from reaching the ascending triangle’s profit objective at ¥120.11 is difficult to estimate at this point.

Short term, H4 prime resistance at ¥119.29-118.80 and H4 resistance from ¥118.57 might interest sellers, given their close connection with weekly resistance at ¥118.64. In light of the areas being positioned against the underlying trend, sellers from this region will likely resort to waiting for additional confirmation to form before committing.

Sterling remains in an exposed position against its US counterpart. Weekly prime resistance from $1.3473-1.3203 is a crucial technical element. Should this area carry out its duties, weekly support from $1.2719 is a level that might be tested in the coming weeks. Additional weakness is supported by the overall trend:

Trend direction has been southbound since late 2007 tops at $2.1161. As a result, the 25 percent move from pandemic lows in March 2020 to February 2021 may be viewed as a pullback within the larger downtrend. This, of course, places a question mark on the 8.5 percent ‘correction’ from February 2021 to March 2022; it may in fact be the beginning of a longer-term push to the downside and not a dip-buying scenario.

Resistance at $1.3082 welcomed price once again on Tuesday and remains in the fight on the daily timeframe. Channel support, drawn from the low $1.3160, and support seen at $1.2826 are support objectives should further selling emerge. Technicians will note the currency pair continues to operate south of the 200-day simple moving average at $1.3611. We can also see that the relative strength index (RSI) remains within oversold territory and could do so for a prolonged period given the current downtrend.

Weekly, daily and H4 timeframes indicate additional weakness could materialise. With that, $1.30 appears vulnerable on the H1 timeframe and emphasises a break lower, aiming for H4 support at $1.2965 and H1 Quasimodo support from $1.2950 (which happens to intersect with daily channel support).