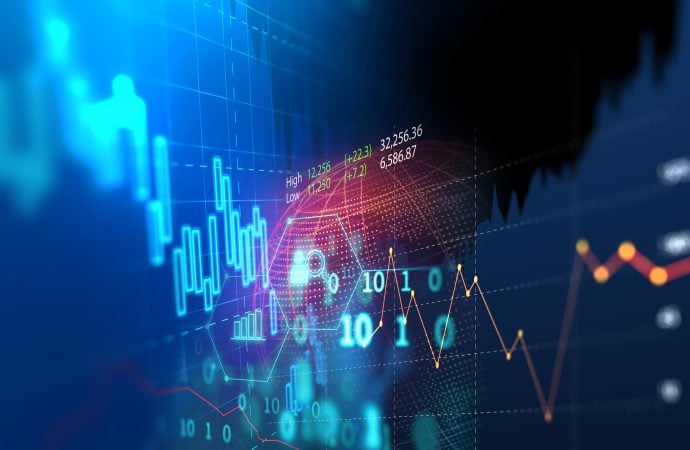 Europe’s shared currency flexed its financial muscle on Monday against a broadly weaker US dollar. Despite USD softness, US Treasury yields advanced across the curve as traders weighed up the prospect of the Fed raising rates on Thursday. At present, there’s a 98.3 percent probability the Fed will raise rates by 25 bps, according to the CME’s FedWatch tool.

From a technical perspective, weekly channel support, extended from the low $1.1186, embraced buyers. This follows last week’s long-legged doji candle. Quasimodo support at $1.0778 also remains a talking point on the weekly timeframe. Although buyers are displaying energy, the longer-term trend reflects a bearish status since topping at $1.2350 at the beginning of January (2021). This is reinforced by a weekly trendline support breach, drawn from the low $1.0636, together with the break of the $1.1602 November 2020 low (circled) and the currency pair refreshing year-to-date lows last week at $1.0806.

The H1 timeframe reveals we are within striking distance of $1.10 after an earlier rally from the $1.09 region in the shape of a double-bottom pattern. H1 Quasimodo resistance resides at $1.1019, a level sheltered beneath H1 resistance at $1.1046. Though the idea of a whipsaw through $1.10 into $1.1019 is likely to draw short-term interest, traders are urged to underline the prospect of movement towards $1.11. This is due to the H4 timeframe demonstrating scope to reach H4 supply coming in at $1.1139-1.1090.

While a whipsaw above $1.10 to H1 Quasimodo resistance at $1.1019 remains in the offing for short-term sellers, a H1 close north of the psychological boundary justifies attention.

A H1 close above $1.10 helps confirm bullish intent from weekly price rebounding from channel support and the H4 timeframe boasting space to confront $1.11ish. This, therefore, may be observed as a signal for buyers to commit, targeting $1.11.

Against the US dollar, the Australian dollar snowballed south on Monday amid downbeat risk sentiment. The weekly timeframe’s prime support at $0.6968-0.7242, therefore, echoes weakness, leaving weekly resistance unopposed at $0.7501. This is in tandem with the overall trend. Recent writing noted the following:

Trendline resistance on the daily timeframe, drawn from the high $0.8007, holding firm at the beginning of last week, and the unit subsequently crossing under the 200-day simple moving average at $0.7309, underpins the bearish setting visible on the weekly timeframe. A familiar decision point from $0.6964-0.7040 may now re-enter the fight. Momentum studies, according to the relative strength index (RSI), also witnessed action pull the indicator’s value south of the 50.00 centreline, showing negative momentum for now.

AUD/USD extending position beneath the 200-day simple moving average should not surprise, according to the longer-term trend. In conjunction with this, a H4 trendline support breach could be seen, consequently leading the candles to the harmonic bat pattern’s PRZ between $0.7109 and $0.7149 (yellow). Although the trend points lower, the harmonic zone is likely to remain on buyers’ watchlists.

Should the above come to fruition and we do explore under H4 trendline support, the $0.7150 level is a location H1 players could hone in on.

Extending recovery gains for a sixth consecutive session, USD/JPY refreshed multi-year highs on Monday amidst rising US Treasury yields. Consequently, price could knock on the door of weekly resistance from ¥118.64, shadowed closely by a 1.618% Fibonacci projection at $119.77 and a channel resistance, pencilled in from the high ¥110.97. Weekly support remains fixed at ¥114.57, plotted alongside weekly channel support.

The currency pair has been stepping higher since early 2021, clearly visible on the weekly timeframe within an ascending channel (¥102.59-¥110.97). In line with this, the overall longer-term trend has been climbing since 2012 (check monthly timeframe). The 21.5 percent correction from June 2015 to June 2016 provided a dip-buying opportunity, as did a subsequent 14.8 percent correction from December 2016 to pandemic lows formed early March 2020. Overall, the primary trend is higher, with the secondary trend promoting additional advances.

As evident from the daily timeframe, Friday left behind a healthy breakout candle. Price ruptured the upper limit of an ascending triangle formation (Quasimodo resistance at ¥116.33). Toppling ¥116.33 allows analysts to chart a pattern profit objective by extending the ‘base’ distance (blue vertical box) from the breakout point to ¥120.11. This, along with weekly price projecting higher levels, informs market participants that USD/JPY may remain on the front foot. However, traders are still urged to pencil in the possibility of a ¥116.33 retest before buyers switch into a higher gear. Do note that although buyers are in the driving seat, the relative strength index (RSI) has entered overbought space, an area indicating that momentum might slow in the coming days.

Against the backdrop of higher timeframes, the H4 timeframe is closing in on Quasimodo resistance at ¥118.24. The H4 chart also shows just how parabolic the recent USD/JPY bid has been. Yet, on the H1 chart, we are seeing upside momentum somewhat level off (green area), despite the currency pair reclaiming ¥118 to the upside in recent hours and showing space to connect with the ¥118.50 area.

The primary trend in this market faces north; the secondary correction (¥125.86 [June 2015] to ¥98.79 [June 2020]) has demonstrated upside strength since 2021 (weekly ascending channel [¥102.59-¥110.97]). This is further emphasised on the daily timeframe through price rupturing the upper boundary of an ascending triangle at ¥116.33 and displaying scope to reach higher levels (weekly resistance at ¥118.64 is recognised as the next upside objective).

The H1, despite showing a slowing of upside momentum in recent hours, has jumped above ¥118 and thus added further confirmation to the bullish side. This may encourage breakout buying above ¥118 and see H4 dethrone Quasimodo resistance at ¥118.24.

For those who read Monday’s weekly technical briefing you might recall the following:

The overall trend facing lower, in addition to the daily timeframe closing under support from $1.3082, favours sellers this week. Downside targets rest at daily channel support (around $1.2944) and daily support from $1.2862. The bearish outlook is supported on short-term charts. H4 price demonstrates scope to close in on support at $1.2965, while the H1 timeframe has room to reach $1.30. Though it is important to realise that before sellers look to take the wheel, a retest of H1 supply from $1.3103-1.3069 might materialise.

The weekly timeframe is now cementing position south of the double-top’s ($1.4241) profit objective at $1.3090. We are now dealing with weekly prime resistance located at $1.3473-1.3203 and the possibility of an extension to weekly support at $1.2719. The longer-term trend supports additional downside. Trend direction has been southbound since late 2007 tops at $2.1161. As a result, the 25 percent move from pandemic lows in March 2020 to February 2021 may be viewed as a pullback within the larger downtrend. This, of course, places a question mark on the 8.5 percent ‘correction’ from February 2021 to March 2022; it may in fact be the beginning of a longer-term push to the downside and not a dip-buying scenario.

Out of the daily timeframe, the pair came within a handful of pips of retesting resistance at $1.3082 on Monday before pencilling in a third consecutive bearish day. Channel support, drawn from the low $1.3160, and support seen at $1.2826 are support objectives should further selling emerge. Technicians will note the currency pair continues to operate south of the 200-day simple moving average at $1.3617. We can also see that the relative strength index (RSI) remains within oversold territory and could do so for a prolonged period given the current downtrend.

Weekly, daily and H4 timeframes indicate additional weakness could materialise. With that, $1.30 appears vulnerable on the H1 timeframe and emphasises a break lower, aiming for H1 Quasimodo support from $1.2950.