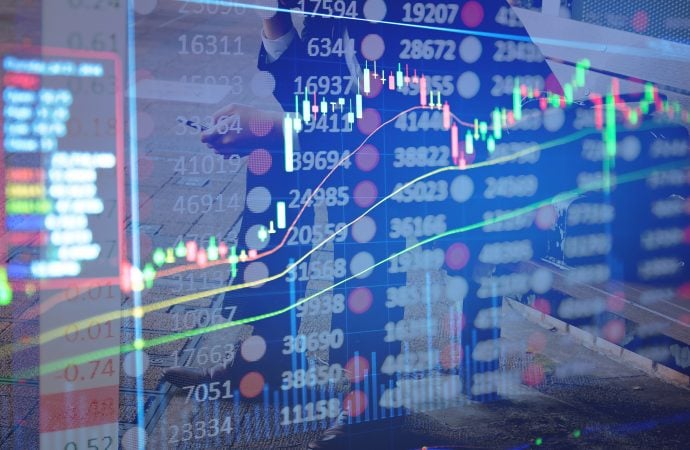 March, as you can see, recently revisited 1.1857/1.1352 demand and is in the process of forming a recovery. When monthly demand enters the frame, traders tend to take note.

Demand for risk assets increased Thursday, consequently weighing on safe-haven currencies, such as the US dollar. Europe’s single currency, therefore, continued to climb against the greenback and unmasked a 38.2% Fib level at 1.2021. This follows a rebound from support priced in at 1.1887 earlier in the week, a level surrounded by a 127.2% Fib projection at 1.1843 and a 100% Fib extension at 1.1848.

The RSI oscillator, thanks to recent upside, is now on the brink of testing the lower side of the 50.00 centreline.

Dollar downside elevated the pair above resistance at 1.1952, followed by a subsequent retest of the level as support.

Assuming buyers maintain position, resistance at 1.2027 can be seen as the next ceiling, with subsequent buying to shine the technical spotlight on another layer of resistance priced in at 1.2135 (previous Quasimodo support).

A closer reading of price action on the H1 scale reveals the unit rebounded from 1.1950 support Thursday (aided by demand at 1.1916/1.1931) and, in recent hours, advanced to within touching distance of 1.20, followed by resistance at 1.2015, a prior Quasimodo support level.

RSI movement has the indicator pencilling in early bearish divergence around overbought space, following an earlier recovery ahead of the 50.00 centreline.

March, as you can probably see, trades higher by 1.1 percent, though still remains within February’s range.

AUD/USD bulls continued to gain in confidence on Thursday as the US dollar index (DXY) refreshed weekly lows.

Registering a third successive daily advance, the pair is now within a stone’s throw from trendline support-turned resistance, taken from the low 0.5506. It is here, in light of the monthly timeframe’s technical position (see above), daily sellers could make a show.

Following a lively break above supply coming in from 0.7751/0.7735 and a subsequent retest heading into US hours on Thursday, price movement climbed to fresh pinnacles and placed 0.78 in the spotlight, closely shadowed by supply at 0.7818/0.7807 (held price lower since early March).

What’s interesting about 0.78 resistance and nearby supply is its connection with H4 supply at 0.7811/0.7770 and the daily trendline resistance, along with the H1 RSI printing early bearish divergence.

Following January’s bullish engulfing candle and further outperformance in February, March is on the verge of mounting a bullish assault (up by 1.9 percent) on descending resistance, etched from the high 118.66 (not considered traditional trendline resistance).

Along with the RSI spinning lower ahead of resistance at 83.02 (active since 2015), there’s scope for price to touch gloves with support at 107.64—a previous Quasimodo resistance—and neighbouring supply-turned demand at 107.58/106.85.

Price unearthed Quasimodo resistance at 109.16 at the beginning of the week, with the pair now in the process of retreating lower. Support at 108.09 is seen, a level fastened just north of important demand coming in from 107.81/108.01.

With H1 circling the underside of 108.50, Fib support (green) between 108.18 and 108.28, as well as trendline support, taken from the low 104.92, can be seen as a possible short-term floor. 108 support is also interesting, strategically positioned just south of the Fib support area.

With daily Quasimodo resistance at 109.38 and the monthly timeframe’s descending resistance yet to make an arrival, selling may be short-lived.

March, as you can see, currently trades flat, circling within the walls of February’s range.

Buyers, as can be seen from the daily chart, recently pencilled in a bottom ahead of trendline support, drawn from the low 1.1409, and support coming in at 1.3755. Upside has remained favoured so far this week, possibly shifting interest back to Quasimodo resistance drawn from 1.4250.

With reference to the RSI indicator, the value shook hands with support made up between 46.21 and 49.16, currently testing the 60.00 region. RSI support forming around the 40.00/50.00 range in trending environments is common.

Following the retest of trendline resistance-turned support, pencilled in from the high 1.4240, Thursday’s bullish showing underpins a possible test of Quasimodo resistance at 1.4007 (aligns with a 50.00% retracement). Interestingly, beyond 1.4007, resistance appears relatively thin until around the 1.42ish point.

Latest developments on the H1 scale brought the 1.40 figure into the spotlight—a psychological level that’s capped upside since late February and therefore will be a widely watched base today.

With the RSI chalking up overbought conditions, 1.40 may attract a short-term bearish theme. Though in the event buyers take the wheel, above 1.40 reveals scope to rally as far north as resistance at 1.4059—previous Quasimodo support (red).

Both the monthly and daily timeframes show room to explore higher levels.

In order for additional buying to take shape, the 1.40 figure, and of course H4 Quasimodo resistance at 1.4007, must be overthrown.

Higher timeframes tend to take precedence over lower timeframes, therefore a break above 1.40 could be brewing. However, this does not mean a short-term bearish scenario from 1.40 is out of the question, particularly as the H1 RSI recently registered overbought conditions.