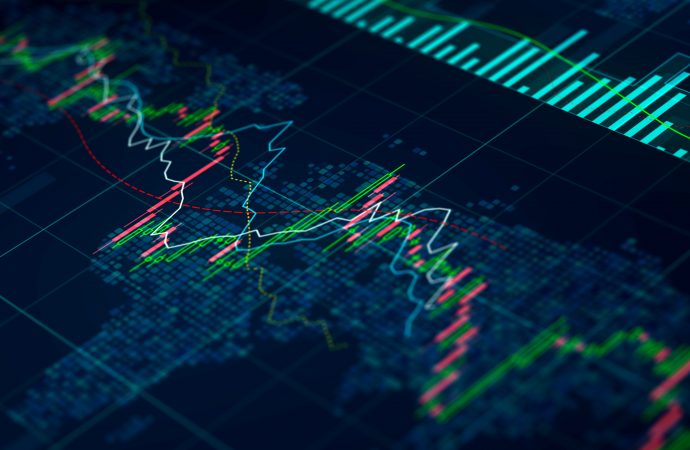 European and US equities fell sharply on Thursday, with US Treasury yields rising for a fourth consecutive session. US inflation data, although meeting consensus forecasts, accelerated higher for a sixth successive month. Consumer prices rose 7.9 percent on a year-on-year basis for February with the core year-on-year print recording a 6.4 percent rise.

The US Dollar Index (USDX) welcomed a bid, which in turn weighed on Europe’s shared currency. Short-term chart studies reveal early US hours whipsawed above $1.11 to test H1 Quasimodo resistance at $1.1120, a level arranged four pips under H4 resistance at $1.1124 which also shares a connection with daily resistance (made up of a descending support-turned resistance, taken from the low $1.1186, and a 38.2% Fibonacci retracement at $1.1075).

Was this a move technicians anticipated? Yes.

For those who read Thursday’s technical briefing you may recall the following:

Going forward, we can see H1 dipping a toe in waters south of $1.10, following an earlier breach of support from $1.1046 (now potential resistance). This indicates willingness to extend losses on the H1 scale, targeting the $1.09 region. Further downside, alongside the daily timeframe rejecting above-noted resistances, is echoed on the H4 timeframe with scope to approach support coming in from $1.0903.

Further to the above, the trend and weekly technical structure also continues to favour a bearish perspective:

According to trend on the bigger picture, a downside bias has been seen since topping at $1.2350 at the beginning of January (2021) on the weekly timeframe. This is reinforced by a weekly trendline support breach, drawn from the low $1.0636, together with the break of the $1.1602 November 2020 low (circled) and the retest of weekly resistance at $1.1473-1.1583. You will acknowledge weekly Quasimodo support calls for attention as the next downside objective at $1.0778.

Traders who managed to secure a bearish setup on the basis of the $1.11 whipsaw are likely to have reduced risk to breakeven and perhaps liquidated the majority of their position. However, should H1 establish a dominant close below $1.10, knowing we are coming from daily resistances and the trend points lower, this may fuel additional downside, taking aim at the $1.09-1.0903 neighbourhood.

The Australian dollar pencilled in another positive session against the US dollar on Thursday, elevating the currency pair north of the widely watched 200-day simple moving average, currently circling $0.7314.

As buyers are strengthening their grip, this has the current weekly candle displaying a doji a touch above the weekly timeframe’s prime support area at $0.6968-0.7242. Upstream, resistance is visible at $0.7501, sheltered under weekly prime resistance at $0.7849-0.7599. The trend, however, appears to be averse to the idea of considerable upside:

Longer term—the monthly timeframe—has portrayed a downtrend since August 2011, suggesting the 12.6 percent correction from mid-Feb tops at $0.8007 (2021) on the weekly timeframe might be the start of a bearish phase and not a dip-buying correction from the 2021 advance from pandemic lows of $0.5506. This (despite the recent upside) places a question mark on weekly prime support. If a break lower should come to pass, weekly support at $0.6673 and a 50% retracement at $0.6764 are observable.

The daily timeframe has its headlights on neighbouring trendline resistance, drawn from the high $0.8007. Ousting this level will likely have traders betting on the possibility of further outperformance to $0.7660. As you can see, the double-bottom pattern ($0.6991) recently had its neckline taken ($0.7314), with the pattern shining light on a profit objective coming in at $0.7660. Supporting a medium-term move to the upside is the relative strength index (RSI) on the daily timeframe, showing the value rotating ahead of the 50.00 centreline: positive momentum.

Meanwhile on the H1 timeframe, the currency pair is hovering ahead of Quasimodo support-turned resistance at $0.7366 and a 61.8% Fibonacci retracement, with any rejection perhaps zeroing in on support from $0.7335. Interestingly, an AB=CD pattern also warrants consideration at $0.7382, closely shadowed by the $0.74 figure. Harmonic traders will note the 1.618% Fibonacci extension present at $0.7372.

From a technical perspective, H1 resistance drawn between $0.7382 and $0.7365 is likely to arouse the attention of short-term sellers.

However, it should be noted that the H4, daily and weekly timeframes support higher prices, at least medium term. H4 shows resistance could be targeted at $0.7412-0.7392 which intersects closely with the daily timeframe’s trendline resistance.

Bolstered by a spirited USD and rising US Treasury yields, USD/JPY eked out a fourth consecutive session in the green. Despite this, technical structure on the higher timeframes remains unchanged:

The trend in this market favours buyers at the moment. The currency pair has been stepping higher since early 2021, clearly visible on the weekly timeframe. In line with this, the overall longer-term trend has been climbing since 2012 (check monthly timeframe). The 21.5 percent correction from June 2015 to June 2016 provided a dip-buying opportunity, as did a subsequent 14.8 percent correction from December 2016 to pandemic lows formed early March 2020. The weekly timeframe’s 1.272% Fibonacci projection at ¥116.09, as you can see, has remained a headwind since the beginning of this year. Should sellers strengthen their grip, weekly channel support, extended from the low ¥102.59, could be an area we see enter the frame.

The daily chart has been in the process of chalking up an ascending triangle pattern (typically considered a continuation arrangement) since December 2021 between Quasimodo resistance at ¥116.33 and an ascending line drawn from the low ¥112.53. Toppling ¥116.33 would allow analysts to chart a pattern profit objective by extending the ‘base’ distance (blue vertical box) from the breakout point. Withdrawing under the ascending line would seat supply-turned demand from ¥112.66-112.07 in the picture. Not only is the area in the company of a 78.6% Fibonacci retracement at ¥112.00 and a 50% retracement from ¥112.55, technicians will acknowledge the widely watched 200-day simple moving average housed within the zone at ¥112.51. Note that the relative strength index (RSI) is also rebounding from support between 40.00 and 50.00 (a ‘temporary’ oversold range since 10th May—common view in trending markets).

For those who read Thursday’s technical briefing you may recall the following in regards to the H4 timeframe:

In terms of where we stand on the H4 timeframe right now, you will see the unit cleared range resistance at ¥115.78 on Wednesday and subsequently held the breached barrier as support. This might be viewed as an early cue we’re headed for the daily timeframe’s Quasimodo resistance at ¥116.33.

As evident from the H4 chart, ¥115.78 remains support with price inching closer to daily Quasimodo resistance.

Medium term, despite a market clearly trending higher, resistance between the weekly timeframe’s 1.272% Fibonacci projection at ¥116.09 and the daily timeframe’s Quasimodo resistance at ¥116.33 could encourage technical selling.

Thursday watched sterling erase Wednesday’s gains versus the US dollar, with GBP/USD, at the time of writing, down by 1 percent on the week. The weekly timeframe is still shaking hands with a double-top ($1.4241) profit objective at $1.3090, along with the daily timeframe continuing to maintain position above Quasimodo resistance-turned support at $1.3082. You will see that the relative strength index (RSI) also remains around oversold conditions.

From the H4 timeframe, price failed to find acceptance above $1.3173 in recent trading, consequently echoing moderate resistance. Support can be seen within touching distance at $1.3079. A break of here, nevertheless, signals we may take aim at support seen at $1.2965. A closer reading of price movement on the H1 timeframe has price drawing under $1.31, inching closer to support at $1.3079 (the H4 support level).

Things are not looking too good for GBP/USD long positions right now. In spite of higher timeframe support, the longer-term downtrend appears to be taking control. Should H4 price engulf support from $1.3079, this might further exacerbate downside pressure, targeting H4 support at $1.2965.