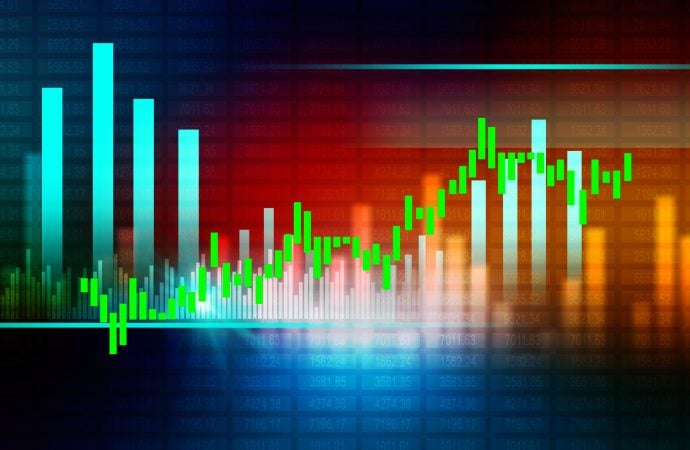 Global equities soared on Wednesday, elevated on the back of sanctions from the West and talks of compromise between Russia and the Ukraine. The clear risk-on setting also observed US Treasury yields extend gains and traditional safe-haven currencies, such as the Japanese yen, Swiss franc and US dollar, navigate lower.

Against six international currencies, including the euro, the Japanese yen and sterling, the US Dollar Index (USDX) snowballed south. This lifted EUR/USD more than 1.5 percent higher on Wednesday and reclaimed a large slice of the prior week’s tumble.

Leaving Quasimodo support at $1.0778 unopposed on the weekly timeframe, price action is closing in on weekly resistance at $1.1174. This level is deserving of the watchlist. Not only did the barrier serve well as support in mid-2020 and in early 2022, the trend remains lower. Earlier research noted the following in terms of trend:

Out of the daily timeframe, Wednesday’s spirited advance north of a decision point at $1.0788-1.0854 led the currency pair to a descending support-turned resistance, taken from the low $1.1186, and a 38.2% Fibonacci retracement at $1.1075. Additional structure resides at $1.1224 resistance, which shares chart space with the weekly timeframe’s resistance from $1.1174.

Boosted by upbeat risk sentiment, the Australian dollar finished higher against its US counterpart on Wednesday and snapped a two-day bearish phase.

The weekly timeframe’s prime support area at $0.6968-0.7242 recently watched buyers gain power. Though despite recording a fifth consecutive session in the green last week, bulls are struggling to reach resistance at $0.7501. The higher timeframe trend might help answer for the lacklustre bid:

Longer term—the monthly timeframe—has portrayed a downtrend since August 2011, suggesting the 12.6 percent correction from mid-Feb tops at $0.8007 (2021) on the weekly timeframe might be the start of a bearish phase and not a dip-buying correction from the 2021 advance from pandemic lows of $0.5506. This (despite the recent upside) places a question mark on weekly prime support. If a break lower should come to pass, weekly support at $0.6673 and a 50% retracement at $0.6764 are observable.

Wednesday concluded at the lower side of the 200-day simple moving average at $0.7316, following Tuesday tunnelling through the value. Should the SMA deliver resistance, this shines the technical spotlight back on a decision point from $0.6964-0.7040. Alternatively, reclaiming position above the SMA signals strength out of weekly prime support and suggests daily trendline resistance, drawn from the high $0.8007, is vulnerable. An additional technical observation is the double-bottom pattern ($0.6991). You will note price has dethroned the pattern’s neckline ($0.7314), with the pattern shining light on a profit objective coming in at $0.7660. The relative strength index (RSI) on the daily timeframe also reveals the value modestly turning ahead of the 50.00 centreline: positive momentum.

Hopes of talks between Russia and the Ukraine prompted risk-on movement Wednesday. Demand for the safe-haven Japanese yen diminished and reinforced a USD/JPY bid.

Recent outperformance in USD/JPY should not surprise in regards to our recent trend studies:

The trend in this market favours buyers at the moment. The currency pair has been stepping higher since early 2021, clearly visible on the weekly timeframe. In line with this, the overall longer-term trend has been climbing since 2012 (check monthly timeframe). The 21.5 percent correction from June 2015 to June 2016 provided a dip-buying opportunity, as did a subsequent 14.8 percent correction from December 2016 to pandemic lows formed early March 2020. The weekly timeframe’s 1.272% Fibonacci projection at ¥116.09, as you can see, has remained a headwind since the beginning of this year. Should sellers strengthen their grip, weekly channel support, extended from the low ¥102.59, could be an area we see enter the frame.

The daily chart has been in the process of chalking up an ascending triangle pattern (typically considered a continuation arrangement) since December 2021 between Quasimodo resistance at ¥116.33 and an ascending line drawn from the low ¥112.53. Toppling ¥116.33 would allow analysts to chart a pattern profit objective by extending the ‘base’ distance (blue vertical box) from the breakout point. Withdrawing under the ascending line would seat supply-turned demand from ¥112.66-112.07 in the picture. Not only is the area in the company of a 78.6% Fibonacci retracement at ¥112.00 and a 50% retracement from ¥112.55, technicians will acknowledge the widely watched 200-day simple moving average housed within the zone at ¥112.48. Note that the relative strength index (RSI) is also rebounding from support between 40.00 and 50.00 (a ‘temporary’ oversold range since 10th May—common view in trending markets).

In terms of where we stand on the H4 timeframe right now, you will see the unit cleared range resistance at ¥115.78 on Wednesday and subsequently held the breached barrier as support. This may be viewed as an early cue we’re headed for the daily timeframe’s Quasimodo resistance at ¥116.33. A similar setup is evident on the H1 timeframe. Two Quasimodo resistances at ¥115.75 and ¥115.69 were engulfed and later retested to form supports, action highlighting a potential approach to ¥116.

Given scope for further upside on the higher timeframes, and the H4/H1 timeframes breaching (and retesting) supports around ¥115.70, an extension higher to ¥116 could be seen. This is positioned closely with the 1.272% Fibonacci projection at ¥116.09 and daily Quasimodo resistance at ¥116.33.

Sterling benefitted on Wednesday as the US dollar plummeted more than 1 percent, according to the US Dollar Index (USDX). The risk-on scenario, in addition to clear-cut technical support, watched GBP/USD snap a four-day losing streak.

Noted technical support in this market: