June 5th 2020: Greenback Vulnerable Ahead of US Non-Farm Payrolls Data 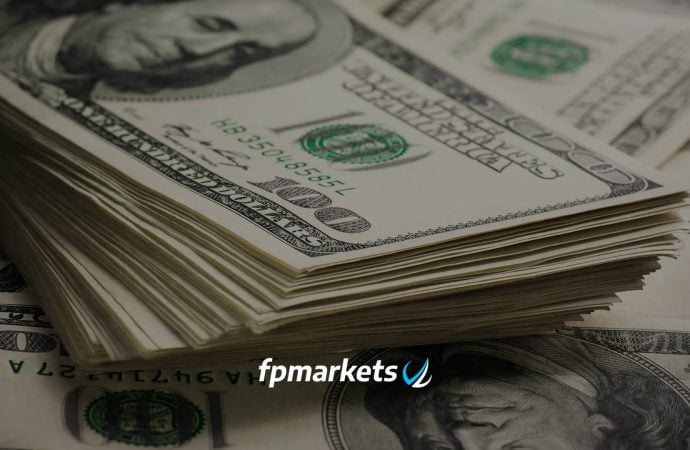 April spent the best part of the month feasting on the top edge of 1.0488/1.0912, squeezing out a Japanese hammer candlestick pattern, typically viewed as a bullish reversal signal. May, as you can see, recovered off worst levels and wrapped up a few pips shy of monthly highs, with June recently reconnecting with the lower ledge of 1.1857/1.1352.

Inspired on the back of broad-based USD selling pressure, EUR/USD notched up its eighth successive daily gain Thursday.

Candlestick traders may also find use in noting the current candle appears poised to close by way of a Japanese shooting star pattern, generally considered a bearish signal at peaks.

Heading into US trade Thursday, a dip to lows at 1.1216 occurred, missing a particularly interesting area of demand at 1.1199/1.1212 by a handful of pips before rotating to the upside.

Supply at 1.1322/1.1286, extended from mid-March, along with the 1.13 level, as you can see, had little to offer yesterday. Heading into the closing stages of the day, buyers and sellers went head-to-head off 1.1350 and the upper parapet of the recently submerged supply zone (now representing demand). Above 1.1350, buyers will have 1.14 on the hit list.

Dips from current structure may see buyers and sellers butt heads at support from 0.6755, placed just ahead of the 200-day simple moving average at 0.6657.

It may also be worth acknowledging the RSI oscillator remains seated within overbought terrain.

Supply from 0.7003/0.6983 knocked some wind out of the Aussie’s upside attempt Thursday, capping gains for a second time this week. If the pair finds itself testing air above the aforesaid supply today, 0.7031 (Dec 31 high) is likely next on tap.

Dips to demand at 0.6827/0.6858 (prior supply) today, on the other hand, implies H4 structure may be entering into a consolidation phase.

Intraday flow rallied strongly amid early US trade Thursday, in a manner suggestive of bringing in the widely watched round number 0.70. However, things turned south a handful of pips above Wednesday’s peak 0.6982, prompting a dip to levels held above the 0.69 level.

As put forward in Thursday’s analysis:

As you can see, after dethroning the 200-day simple moving average at 108.37, we are within touching distance of completing the falling wedge pattern.

Indicator-based technicians will also note the RSI indicator is seen topping ahead of overbought territory.

Intraday motion is seen feasting on offers above the 109 level, as we write, following a retest scenario off a bullish pennant configuration, established from a high of 108.84 and a low coming in from 108.42.

Assuming we maintain a bid above 109, the pennant’s take-profit target, measured by taking the preceding move and adding this value to the breakout point, projects we may strike 1.10 (blue arrows).

While the break of 109 has likely seen buyers off the H1 pennant retest reduce risk to breakeven, resistance is may enter play around the 109.30 region, based on the daily falling wedge take-profit target, held within the lower range of H4 supply at 109.65/109.24.

So, although we could be heading for 1.10, according to H1 pattern structure, we can expect some road bumps to hit along the way. 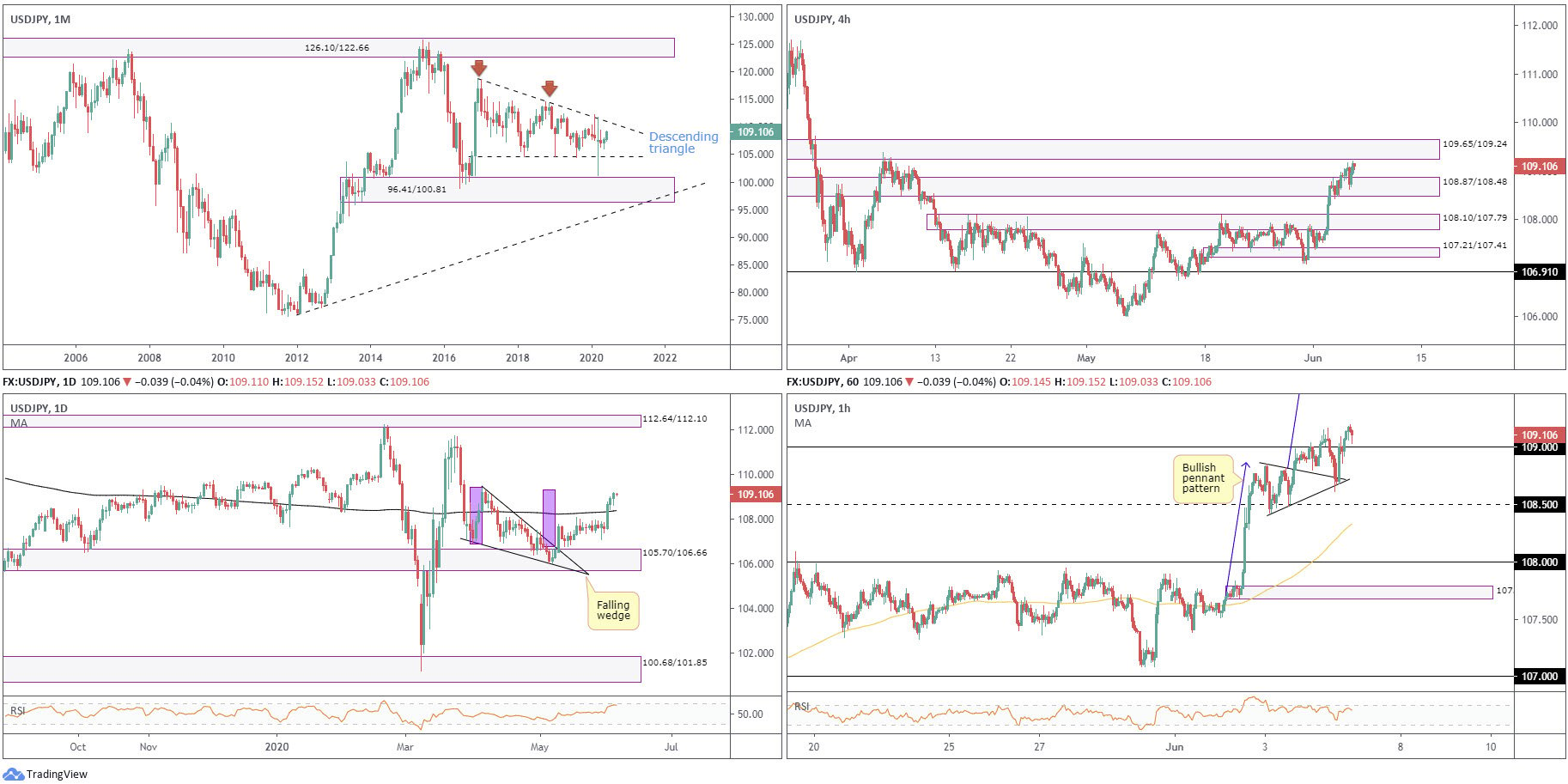 GBP/USD retained its underlying bid Thursday, latching onto its sixth successive gain, albeit in the shape of slowing momentum.

Thursday’s analysis put forward the possibility of an intraday double-top pattern off 1.2612 (blue arrows), with a neckline stationed at 1.2554. Analysis also suggested that a break of the neckline could portend moves back to demand at 1.2511/1.2482 (prior supply), which holds 1.25 within.

As you can see, the pattern worked out beautifully, with early London challenging the aforesaid demand and recovering back to 1.26 by the close of trade.

Breaking higher and violating H4 resistance at 1.2624, on the other hand, could have daily sellers make an entrance off the underside of daily supply at 1.2649/1.2799, given the H4 zone is glued to the underside of the daily base. 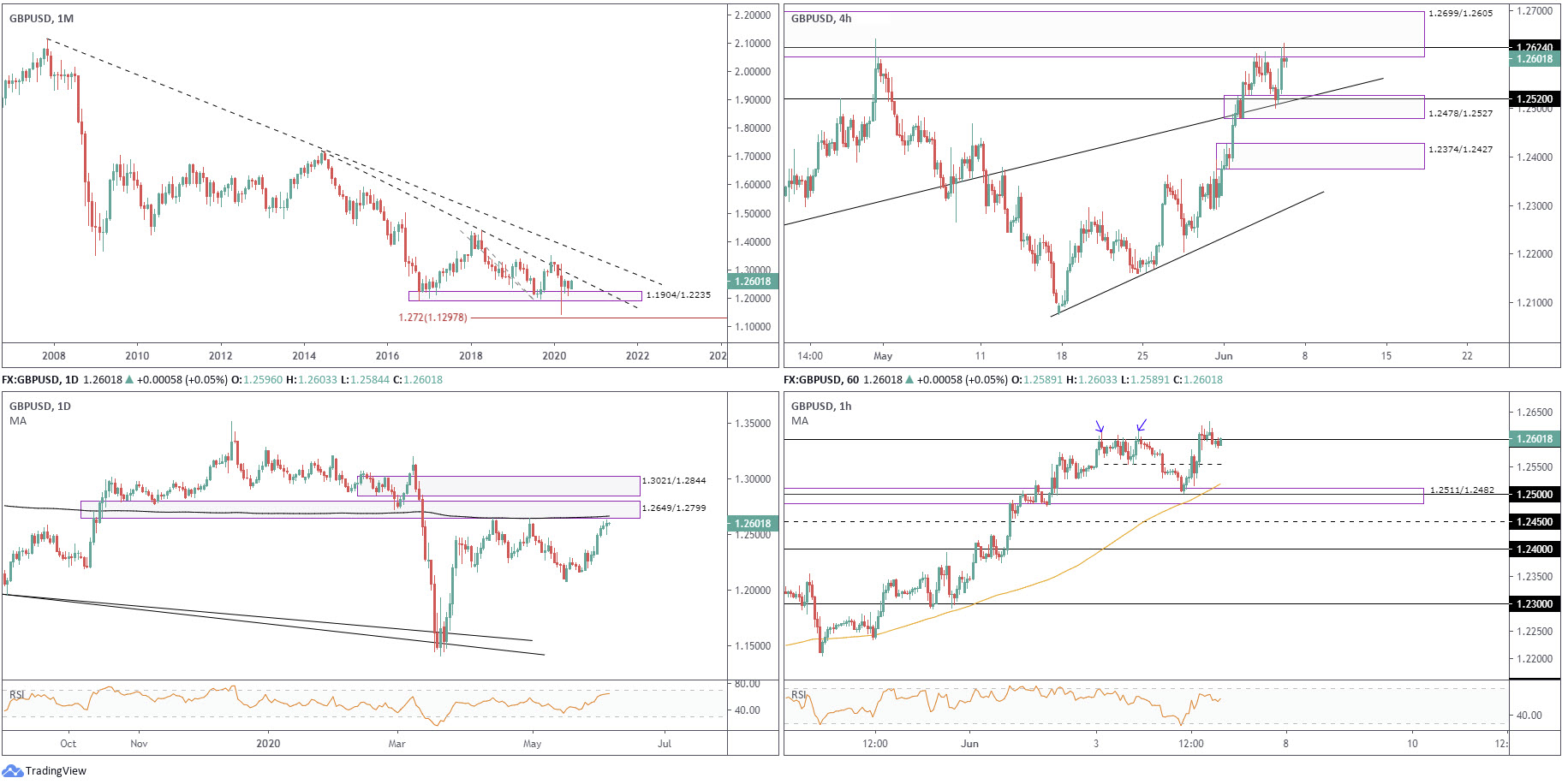