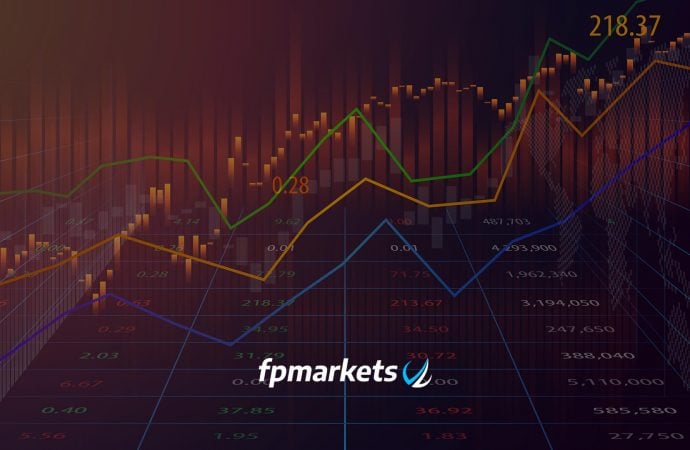 June extended gains, though ran into opposition at the lower ledge of supply from 1.1857/1.1352 (unites with long-term trendline resistance [1.6038]) – the month currently trades off best levels.

EUR/USD recently addressed a potential reversal zone (PRZ), derived from a harmonic bearish bat pattern, comprised of an 88.6% Fib level at 1.1395, a 161.8% BC projection at 1.1410 and a 161.8% Fib ext. level at 1.1462 (red oval). According to the harmonic pattern’s overall structure, despite Monday’s decisive recovery, price is tipped for more underperformance.

Demand at 1.1189/1.1158 (prior supply), albeit putting forward a fragile tone Friday, rejuvenated euro bidding yesterday. This throws light on channel resistance (1.1422). A shift above here is likely to prepare the ground for a climb to resistance at 1.1348.

Snapping a 4-day losing streak, intraday upside rode through a number of key resistances on the H1 timeframe Monday, surfacing above the 1.1250 point.

1.1250 is open to a retest today as support, cushioned by recently taken channel/trendline resistances which are also expected to serve as supports (1.1422/1.1293).

EUR/USD portrays an interesting cocktail of technical structure this morning.

On one side of the field, monthly supply at 1.1857/1.1352 holds price, along with daily action recently respecting its harmonic bearish bat pattern and suggesting we may eventually head for the 38.2% Fib level at 1.1106.

On the other side, however, H4 channel resistance (1.1422) could hinder dip-buying scenarios off 1.1250/H1 trendline supports.

Overall, it appears sellers govern the majority of flow, in terms of technical structure, despite the week’s enthusiastic start. 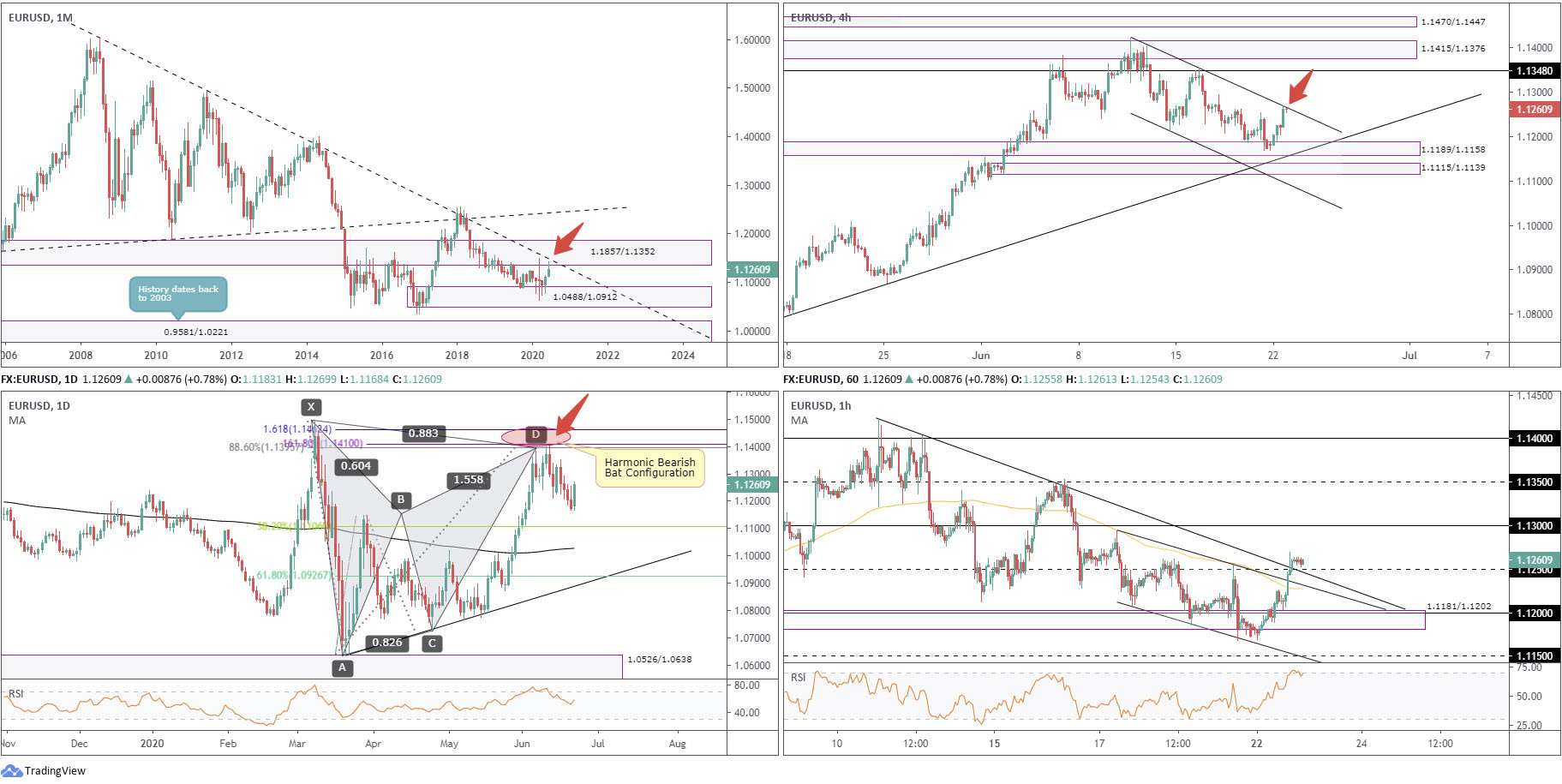 Since June 11 smothered support at 0.6931, the base has proved reasonably worthy resistance.

Although the break lower threw light on support nearby at 0.6755, the level remains unopposed. Interestingly, dethroning the aforementioned support also throws light on the 200-day simple moving average at 0.6664, which is in the process of flattening, following months of drifting lower.

Initially, as you can see here, research had eyes on a descending triangle. However, following Monday’s kick higher, a falling wedge (0.6976/0.6833) appears more appropriate technical structure on this timeframe.

For the H1 falling wedge to complete, price has to overcome a number of potentially troublesome hurdles, including daily resistance at 0.6931 and the widely watched round number 0.70 seen on the H1.

A daily close above the aforementioned daily resistance, therefore, will likely serve as a cue to reduce risk to breakeven.

Demand at 105.70/106.66 welcomed price action into the closing stages of the week. Despite Thursday’s mild recovery, underlying bids remained soft on Friday and Monday. This threatens a dive into the aforesaid demand this week.

The 200-day simple moving average at 108.39 has been flattening since mid-March, and represents achievable resistance should a rotation to the upside come to fruition.

107 has proved wholesome resistance, withstanding a number of upside attempts in the second half of last week and also again yesterday. The 100-period simple moving average is also now seen intersecting with the round number.

The H4 bearish pennant pattern suggests the prospect of further losses, though at the same time faces opposition off H4 demand at 106.49/106.66, which as we already know, is linked with the upper boundary of daily demand at 105.70/106.66. As such, if the lower limit of the H4 bearish pennant gives way, traders can expect a potentially uncomfortable ride to its take-profit target (measured by taking the preceding move and adding this value to the breakout point). 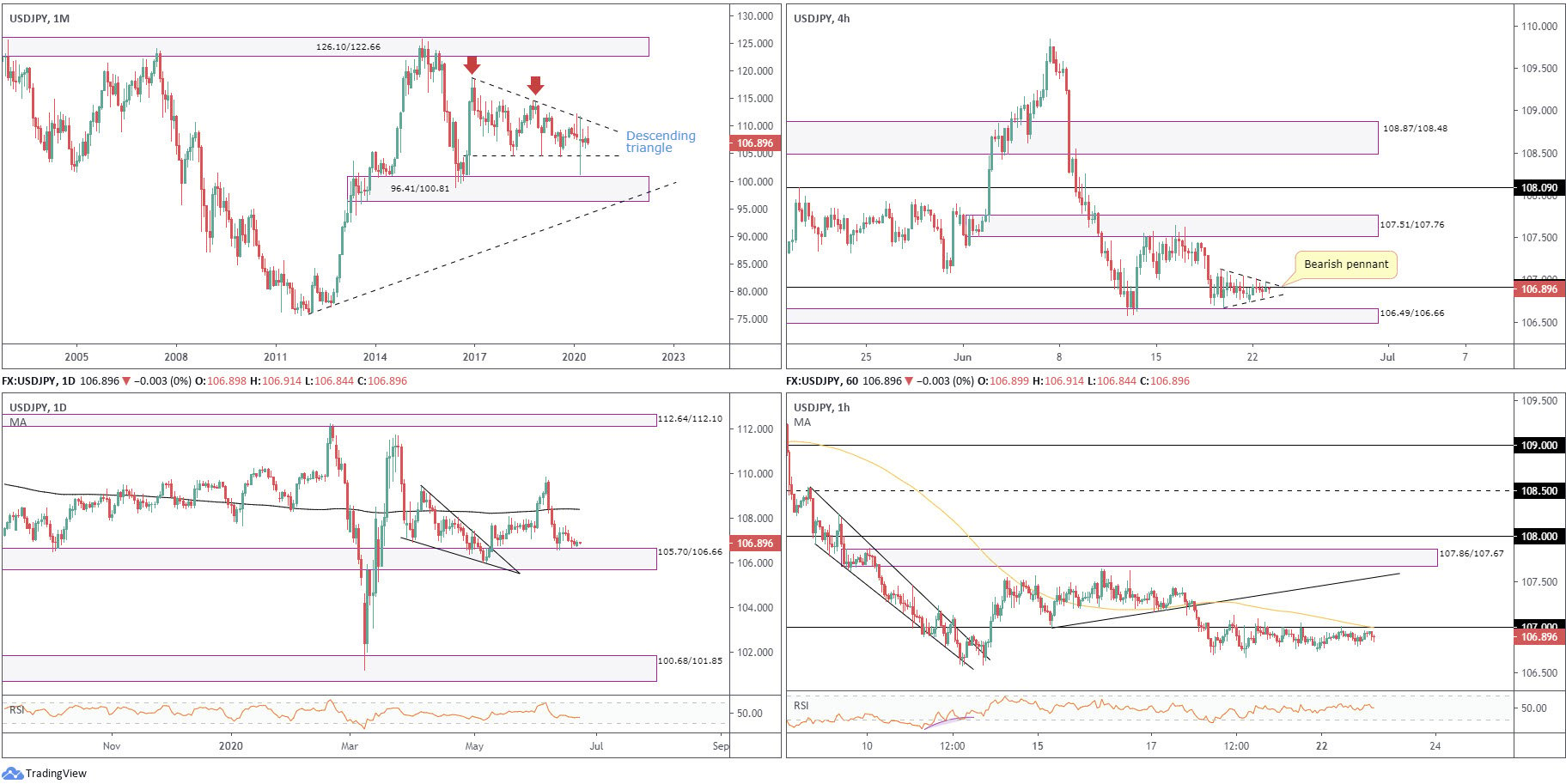 Following last Tuesday’s retest at the 200-day simple moving average from 1.2683, the second half of the week took the currency pair to demand at 1.2192/1.2361, which, as you can see, held on Monday. This is an area not only fastened to the top edge of monthly support, it is also considered the decision point to break 1.2647 (April 14 high).

After retesting 1.24, albeit probing lows at 1.2380, as we transitioned into US trade Monday, candle action tested the resolve of offers at 1.2450.

Despite the above confluence, traders are also urged to remain aware of where we’re trading from on the daily timeframe: demand.