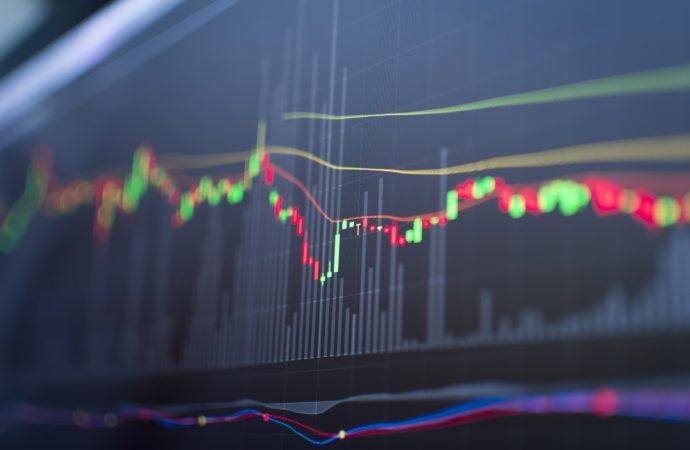 Upstream, the technical spotlight is concentrated on 2021 peaks at 1.2349, with additional upside possibly welcoming ascending resistance (prior support [1.1641]).

Versus a basket of foreign currencies, the US dollar index (ticker: DXY) extended recovery gains on Thursday, 24 hours after the US Federal Reserve surprised markets.

Dollar support bruised recent EUR/USD action. Notably, the currency pair tunnelled through the 200-day simple moving average, currently circling 1.1991—movement typically viewed as a bearish cue. Should sellers override any technical bids surfacing around the 61.8% Fib retracement at 1.1918, this emphasises a downward bias and has Quasimodo support at 1.1688 calling for attention.

Trend on the daily timeframe has been somewhat muted since 2021. 2020, nevertheless, was a relatively strong period for the unit.

The timeframe’s RSI indicator, following last week’s move through support at 51.36, is now on the doorstep of oversold space (an area possibly drawing bullish awareness).

Recent hours, nonetheless, witnessed the one-sided decline confront Quasimodo support from 1.1899, which, for now at least, is serving as a floor. Upside attempts are likely to be limited by 1.1937, while sellers regaining control south of 1.1899 suggests demand at 1.1794-1.1822 could make an entrance.

A closer examination of price action on the H1 chart witnessed the 1.19 figure welcome the pair during US hours on Thursday, a level organised north of Quasimodo support from 1.1883. A EUR/USD bid throws light on the key figure 1.20 (supply marked yellow between 1.1958 and 1.1926 is potentially fragile).

Reinforcing 1.19 support is RSI bullish divergence within oversold territory—this indicates increased momentum to the upside. However, traders are likely watching for the indicator to exit oversold before taking action.

Alternatively, keep eyes on the upper side of monthly support at 1.1857. which may be tested should a 1.19 breach come about.

June is currently down by 2.3 percent.

AUD/USD failed to exploit Thursday’s early bid on the back of optimistic Australian job’s data, as USD upside added to recent Fed-induced gains. This ultimately weighed on the currency pair, pencilling in a third successive daily loss and crossing swords with the 200-day simple moving average at 0.7548 and support from 0.7563.

The RSI, however, is bound for oversold space, currently trading at 32.39.

Following 0.7632-0.7653 welcoming a retest, a strong bearish wind emerged and pulled the currency pair under two Quasimodo supports at 0.7588 and 0.7563, both of which now represent potential resistance.

Elsewhere on the chart, support is seen in the shape of a Quasimodo formation at 0.7507.

Out of the RSI indicator, bullish divergence is unfolding off support at 19.30. The value exiting oversold may strive for the 50.00 centreline which aligns with trendline support-turned resistance, taken from the low 22.47.

Long-term resistance at 110.94-110.29—posted under supply at 111.73-111.19—made a show in recent movement, with Thursday enticing bearish flow and erasing a large portion of Wednesday’s upside.

Downside structure to be cognisant of are lows around the 109.19 (upper green oval), closely shadowed by 108.60ish lows (lower green oval), with subsequent selling to perhaps bump heads with supply-turned demand at 107.58-106.85.

As stated in previous writing, trend studies reveal the pair has been trending higher since the beginning of the year, though discovered a top heading into early April. Recent research also showed the RSI continuing to oscillate around resistance at 57.00. Additional structure can be found at support from 28.19 and resistance drawn from 83.02.

It is worth pencilling in the Quasimodo support situated just under 110 at 109.91.

Short-term momentum, according to the RSI oscillator, is depressed, exploring space south of the 50.00 centreline and consequently threatening moves into oversold water (possibly eyeballing indicator support at 18.76).

May, despite diminished volatility during March and April, traded firmly on the front foot, up by 2.8 percent. June, however, is depressed (down 2 percent), albeit recording fresh YTD peaks at 1.4250.

In the shape of five consecutive losing sessions, sterling nosedived through support at 1.4003 (now labelled resistance) and locked horns with demand at 1.3857-1.3940—an important technical area where a decision was made to INITIALLY break above 1.4003 resistance.

Though efforts to defend demand may be limited by 1.4003, terrain south of the area unearths Quasimodo support at 1.3609 and neighbouring 200-day simple moving average circling 1.3587.

As for the RSI indicator’s location, the value nudged below 40.00 and is on the doorstep of oversold territory.

Latest from the H4 chart has the currency pair toying with support around the 1.3919ish region, following an earlier test of resistance from 1.4007. Also of technical note is Quasimodo support registered at 1.3876.

From the H1 chart, the technical landscape shows bulls holding 1.39 as support and, as we write, taking a stab at overthrowing resistance from 1.3929. This is accompanied by RSI bullish divergence out of oversold territory.