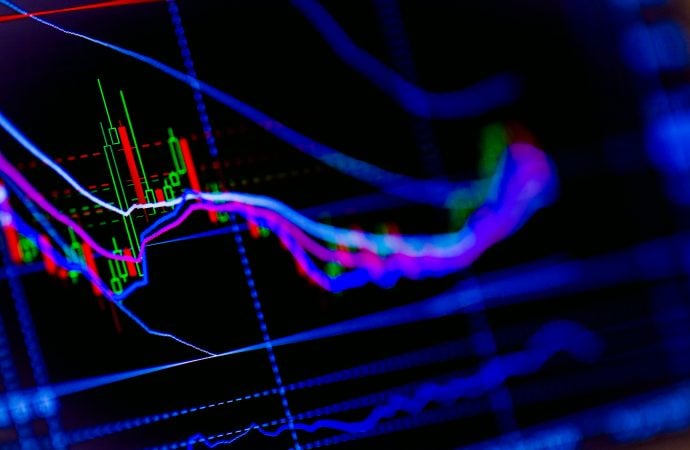 Thursday, as you can see, wrapped up in the shape of a doji indecision candle. In light of the candle’s location on the chart (established within a mild range), this portrays a measure of caution in the market.

In terms of where we stand on the chart’s framework, Quasimodo resistance at 1.2278 remains in the light, while, as stated in recent writing, navigating deeper water from current price underlines dynamic support around 1.1985: the 200-day simple moving average.

Activity out of the RSI demonstrates the value attempting to hold on to support from 51.36, action following a deterioration from peaks fashioned just south of overbought status.

In what was a somewhat choppy session—oscillating between gains and losses—EUR/USD ended the day mostly unchanged as the market digested upbeat US inflation data and ECB commentary.

From a technical standpoint, the currency pair remains languishing south of the 61.8% Fib retracement at 1.2206, which made an entrance on Wednesday.

For those who read previous analysis you may note that the aforesaid Fib represents a second take-profit target derived from the recently completed AB=CD formation off the 100% Fib projection at 1.2123 (arranged just south of a 61.8% Fib retracement at 1.2094).

The bulk of yesterday’s movement occurred around the 100-period simple moving average at 1.2176.

With regards to the RSI indicator, we are seeing the value explore space under the 50.00 centreline after flirting with peaks around 60.00ish.

The RSI shows the value engaging the 50.00 centreline, following last week slicing to 40.00s. North of here, we have trendline resistance, drawn from the peak 79.74.

The US dollar index (ticker: DXY) finished off best levels as recent US inflation data and ECB action failed to spark movement.

Technically, however, AUD/USD derived modest support from 0.7726—Monday’s session low. In the event the market maintains a bid, Quasimodo resistance from 0.7782 is in the offing. Space under 0.7726, on the other hand, could guide price action as far south as 0.7632-0.7653 demand.

As for the RSI indicator, overbought space is plotted nearby, possessing obvious resistance from 72.21.

Prime focus is on H1 supply at 0.7783-0.7771. Recognising the area shares space with H4 Quasimodo resistance at 0.7782, bearish activity could develop from this neighbourhood.

Bearish interest, however, may also want to consider the 0.78 figure. Not only is this a widely watched level, daily resistance is located nearby at 0.7816.

Although April finished lower by 1.3 percent and snapped the three-month winning streak, May (+0.2 percent) held the breached descending resistance, echoing potential support for the month of June, currently trading higher by 0.2 percent.

Trend studies, nevertheless, reveal the pair has been trending higher since the beginning of April. Subsequent months has witnessed a sizeable retracement, followed by an attempt to recapture higher levels.

The RSI is stationed under resistance at 57.00, yet currently challenging the 50.00 centreline. Should a break lower materialise, oversold might be in store, eyeing support at 28.19.

Although demand at 109.02-109.20 motivated bullish activity at the beginning of the week, USD/JPY came under renewed pressure Thursday and has price loitering within a stone’s throw of the noted demand base. The key point to be mindful of is should we shake hands with this demand once more, trendline support, drawn from the low 107.48 intersects with the upper side of the demand and may trigger another bullish attempt.

Failure to hold the current demand, technical attention shifts to another layer of proven demand printed at 108.20-108.43.

Following an earlier bull trap—movement in which price spiked to highs of 109.79 and deceived breakout bulls north of the previous higher high at 109.67—the technical pendulum swung in favour of sellers, with price toying with space a touch north of demand at 109.07-109.19 (set within H4 demand at 109.02-109.20), which is positioned within striking range of the 109 figure.

Information derived from the RSI informs traders that momentum is on the verge of entering oversold space, a zone between 0 and 30.00 which indicates extreme levels (gone too far in a particular direction according to the indicator) and a place where a reversal could emerge.

What’s also interesting is the H1 and H4 zones are supported by monthly action balancing off descending resistance-turned support.

May, despite diminished volatility during March and April, traded firmly on the front foot, up by 2.8 percent. June, however, is somewhat depressed (down 0.2 percent), albeit recording fresh YTD peaks at 1.4250.

Versus the US dollar, sterling ended Thursday on the front foot, following upbeat inflation data out of the US and recent ECB commentary.

Trendline support, taken from the low 36.14 on the RSI, gave up position last week with recent action cruising within range of the 50.00 centreline.

Since mid-May, the H4 chart has been busy carving out a consolidation between 1.4096 and 1.4219. In spite of a handful of whipsaws (fakeouts beyond range extremes are common), the range remains intact. As evident from the chart, Thursday, although whipsawing the lower side of the aforesaid range, produced an almost one-sided recovery to a high of 1.4178.

Technical structure above the consolidation has daily Quasimodo resistance from 1.4250 in place; below the range, the chart points to trendline support, drawn from the low 1.3668, and support priced in at 1.4007.

Despite mild selling, as we write, resistance could potentially form at 1.42, with a break uncovering additional resistance coming in at 1.4246.

The picture from the RSI shows the value nearing the oversold range, in particular resistance at 71.00ish.

The 1.42 figure based on the H1, dovetailing closely with the upper side of the H4 range at 1.4219, forms potential resistance. The caveat, of course, is a possible whipsaw forming to test daily Quasimodo resistance at 1.4250.

With scope to pilot higher levels, an alternative short-term scenario to be mindful of is H1 retesting the 100-period simple moving average around 1.4148 and driving moves to 1.42.