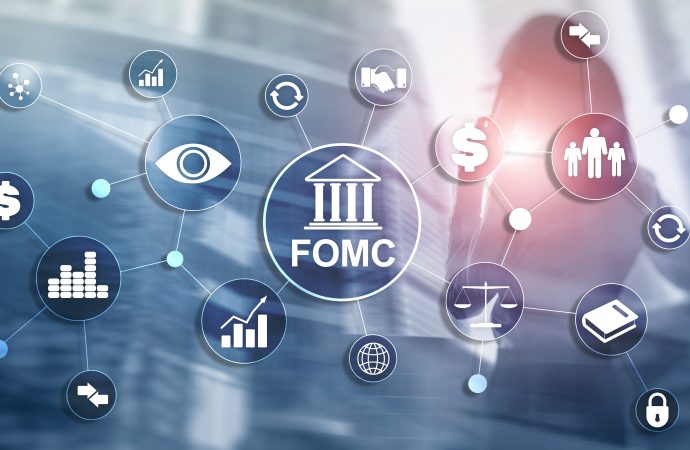 After eight days of one-sided traffic, sellers eventually made a stance and peaked a handful of pips ahead of a potential reversal zone (PRZ), derived from a harmonic bearish bat pattern (comprised of an 88.6% Fib ret level at 1.1395, a 161.8% BC projection at 1.1410 and a 161.8% Fib ext. level at 1.1462 [red oval]). As can be seen from the chart, sellers are struggling to find their rhythm as Tuesday staged a comeback, smothering Monday’s indecision candle by way of a bullish outside pattern.

In addition to the bearish configuration, the RSI indicator remains toying with overbought levels, fading peaks of 78.00.

Against the $, Europe’s single currency made a run for lows at 1.1241 before turning things around and crossing paths with highs at 1.1363. Technically, the advance is unlikely to persist, hovering a shade under supply coming in from 1.1415/1.1376, an area that capped upside on Friday.

Traders may also find use in noting the H4 supply area’s position on the daily timeframe: located around the lower boundary of the PRZ, derived from the harmonic bearish bat pattern. Therefore, even with buyers making a stance here and breaching H4 supply, sellers may simply sell into buy-stop liquidity here, causing a bull trap.

1.1250, as expected, forged support on Tuesday, pulling the candles back above the 100-period simple moving average and 1.13 level to 1.1350. Intraday traders, assuming a dip south of 1.1350 this morning, will likely head for local support at 1.1317. This is an interesting barrier having seen the base prove itself as both support and resistance in recent trade. Despite its appeal, however, the threat of a whipsaw into orders at 1.13 is certainly there, closely trailed by the 100-period simple moving average.

Intraday, the area between 1.13 and 1.1317 offers appealing support, enough to perhaps generate a move back to 1.1350 and, with a bit of luck, the underside of H4 supply at 1.1376. Any higher than this is unlikely owing to where we’re trading on the higher timeframes at the moment.

May’s extension and June’s impressive early rally has, as you can see, placed monthly price around the upper limit of supply at 0.7029/0.6664. What’s also notable here is within the supply area’s walls a long-term trendline resistance (1.0582) was recently penetrated, suggesting buyers may still have the advantage.

By way of an outside bearish day, trade snapped an eight-day winning streak Tuesday, technically reinforced by trendline resistance (0.6671) and supply from 0.7059/0.7031.

The biggest challenge for sellers right now is overcoming support at 0.6931, which was also brought into the fold yesterday. Breaching the aforesaid level may fuel a drop to another support pencilled in at 0.6755.

Indicator-based traders will note the RSI oscillator dipping from peaks at 80.00, perhaps exiting overbought territory today. It may also interest traders to note the 200-day simple moving average at 0.6661 is in the process of flattening following months of drifting lower.

In spite of price clawing back a portion of earlier losses, demand at 0.6827/0.6858 (prior supply) is now on the hit list as the next potential floor on this timeframe. Note this area also joins closely with trendline support (0.6402).

The Australian dollar weakened amid risk aversion Tuesday, nosediving into orders at 0.69 heading into London and climbing above the 100-period simple moving average and testing trendline resistance (prior support – 0.6856) going into US trade.

RSI action recently dipped a toe in oversold waters and is now attempting to topple its 50.00 mid-way point.

Against the backdrop of higher-timeframe flow, intraday has 0.70 in sight as feasible resistance today, as well as its converging trendline resistances. Whether 0.70 is enough to hold price action lower and force a daily close under 0.6931, however, is difficult to judge at this point.

The month of March concluded by way of a long-legged doji candlestick pattern, ranging between 111.71/101.18, with extremes piercing the outer limits of the aforementioned descending triangle formation. April was pretty uneventful, ranging between 109.38/106.35. May also remained subdued, ranging between 108.08/105.98, with June also currently off best levels into unchanged status.

After toppling 108 going into US trade Tuesday we tested the lower boundary of what appears to be a falling wedge pattern (108.52107.92 – in this case serving as a possible reversal signal). 107.32 (green) resides as the next support target on this timeframe, therefore, further selling may still be in store today.

The flip side to this, though, is the RSI indicator is seen producing bullish divergence out of oversold territory.

Buyers could certainly stage a recovery from H4 demand at 107.51/107.76 today, though the area is open to a whipsaw into the 61.8% Fib ret level at 107.45, which aligns closely with H1 support at 107.32. On account of this, H1 traders may seek a H1 close out of the current falling wedge pattern before considering long positions.

Support at 1.1904/1.2235 remains in motion as we transition into June, with the month currently recording gains of more than 3%. Neighbouring resistance can be found in the form of a trendline (1.7191), which, as you can see, is now within walking distance.

GBP/USD retained its underlying bid Tuesday, latching onto its ninth successive gain after the 200-day simple moving average at 1.2674 kept the pound on the winning side of the table.

With respect to the RSI indicator, we also recently entered overbought terrain on this timeframe.

Supply at 1.2699/1.2605 recently came under fire, with price penetrating and holding its upper boundary. The week has seen the area shift to demand, reinforced by another local demand coming in from 1.2583/1.2632.

This shines light on supply at 1.2851/1.2805, an area boasting mouth-watering momentum out of its base and essentially representing a decision point to break the 1.2725 low (Feb 28).

Resistance at 1.2740, once again, entered play on the H1 timeframe after breaking through orders at the 1.27 level heading into US trade Tuesday. While 1.2740 may fuel another run sub 1.27, 1.28, a level converging closely with the lower ledge of H4 supply at 1.2851/1.2805, is worth noting as possible resistance should we turn for higher levels today.

Monthly trendline resistance is not expected to make its presence known until around the 1.2790ish region, merges with the upper limit of current supply on the daily timeframe at 1.2649/1.2799.

With monthly suggesting scope to pop higher, and H4 also displaying space to approach 1.2851/1.2805, a break of H1 resistance at 1.2740 could occur today, offering intraday buyers the opportunity to long towards 1.28. 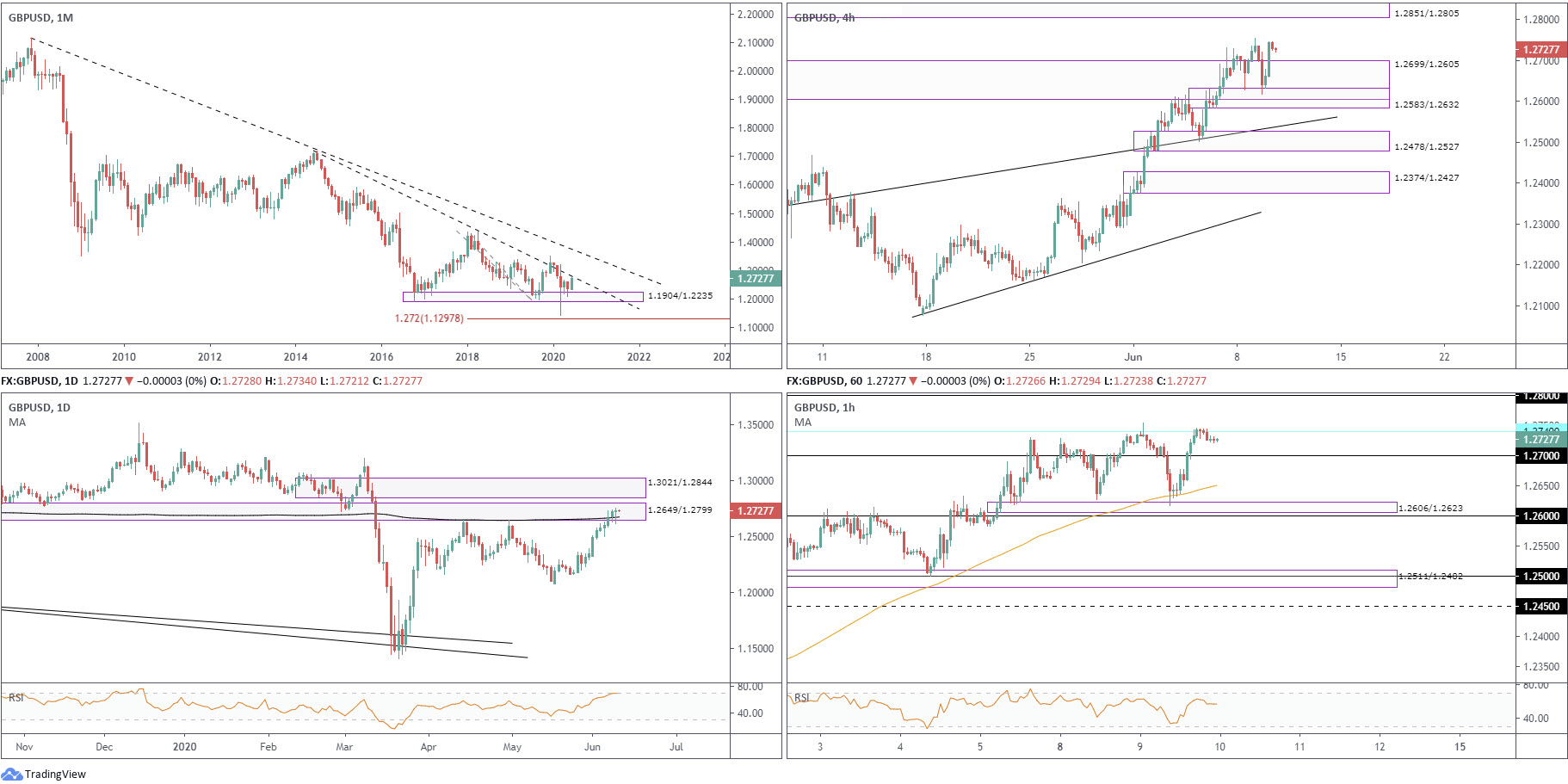