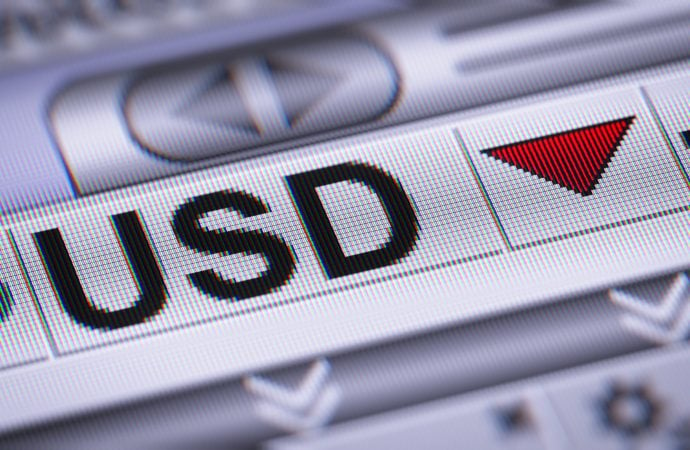 July is currently seen toying with the aforesaid supply.

As you can see, buyers appear to be gathering traction, leaving sellers in a precarious situation as the Fib targets have yet to be met.

Buyers and sellers exchanged words at channel support (prior resistance – 1.1422) in recent activity, leading to the pair advancing and crossing paths with resistance at 1.1348.

US trade witnessed increased demand for euros as the DXY split 96.50 to the downside. EUR/USD on the H1 timeframe brushed aside 1.13, as well as supply at 1.1316/1.1306, which, as you can see, was later retested as demand before connecting with 1.1350 resistance. While current action is feasting on levels just south of the latter, a violation of the level provides a basis to approach the 1.14 level.

This indicates a possible break above 1.1350 today and test of the aforesaid H4 supply, which may, owing to the area’s confluence, see traders pursue bearish strategies.

May’s extension, together with June’s follow-through, has supply at 0.7029/0.6664 echoing a vulnerable tone in early July, particularly as an intersecting long-term trendline resistance (1.0582) shows signs of giving way.

AUD/USD ousted resistance at 0.6931 Monday, with Wednesday elevating higher from the base as support.

The break to the upside shines focus on two trendline resistances close by (prior supports – 0.6744/0.6671); a violation here unmasks another resistance at 0.7197.

Since June 10, H4 has been in the process of establishing a (bullish) pennant pattern between 0.7064/0.6776, generally considered a continuation pattern among chart pattern traders.

As you can see, last week had price penetrate the upper boundary of the aforesaid pennant, unearthing a buy signal.

Monthly price appears to be squeezing sellers out of the market as daily price holds 0.6931 as support. This, coupled with room to advance on the H4 to supply at 0.7058/0.7029, may see the H1 ABCD correction struggle to chalk up anything meaningful to the downside.

The most ABCD sellers will likely receive is the 38.2% Fib level at 0.6962 (of legs A/D), widely considered as an initial take-profit target. 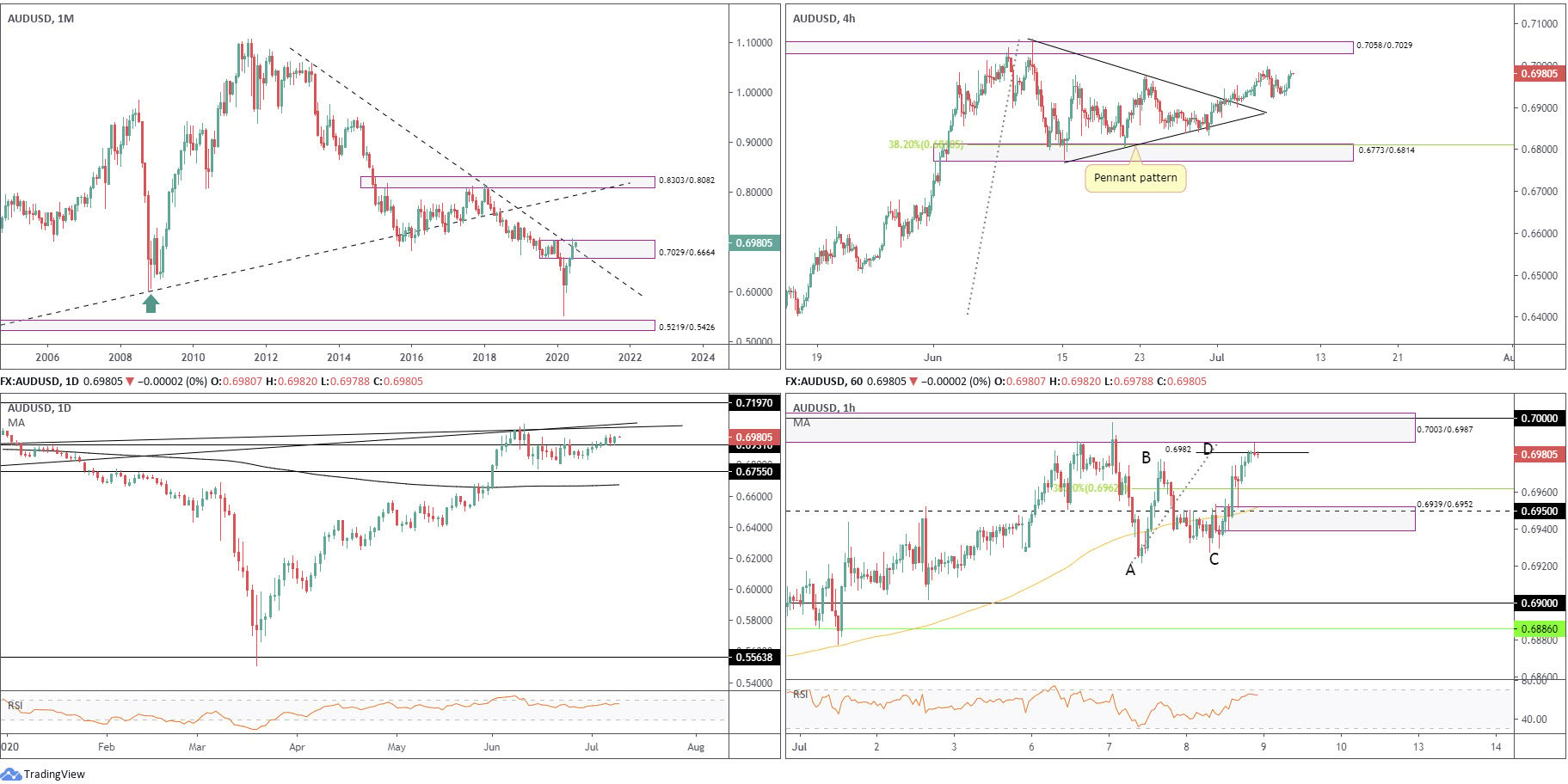 Despite failing to connect with the 200-day simple moving average at 108.37 last week, upside momentum came to an abrupt halt and fashioned a bearish outside day.

Having seen an indecisive tone take over the pair of late, light still shines on a possible run back to demand at 105.70/106.66.

Demand at 107.03/107.28 remains a key feature on the H4 timeframe, despite price failing to journey above 107.70. It should also be noted, in case we cross into deeper water, we have a trendline support lurking just beneath the current demand zone, drawn from 106.58.

Intraday navigated through 107.50 during early US trade Wednesday and, within the space of three dominant H1 bearish candles, we witnessed price make contact with demand at 107.16/107.26 (located within the upper boundary of H4 demand).

Buyers, as you can see, are attempting to make a show, confirmed by bullish RSI divergence.

Failure to hold here will throw light on the 107 level and associated trendline support (prior resistance – 107.45).

Support at 1.1904/1.2235 and long-term trendline resistance (1.7191) remains clear structure on the monthly timeframe at the moment, with the latter prompting a notable upper shadow in June.

Concerning the primary trend, lower peaks and troughs have decorated the monthly chart since early 2008, essentially placing 1.1904/1.2235 in a vulnerable position.

Demand at 1.2192/1.2361 received price action last week, stirring a notable bid. This week has continued to build on recent momentum, sailing to highs at 1.2623.

To the upside, traders will still be looking at the 200-day simple moving average at 1.2687 as the next available resistance, with a violation uncovering supply at 1.3021/1.2844.

The pound’s aggressive appreciation against the greenback reclaimed Tuesday’s high at 1.2592 and landed within close proximity to resistance at 1.2629.

It was revealed in Wednesday’s analysis that 1.25 offered well-grounded support, aligning with two trendline supports (1.2529/1.2257) and the 100-period simple moving average (red oval).

As visible from the chart, price fell short of the 1.25 level, though crossed paths with trendline support (1.2529) before spinning higher. Upside unseated 1.2550 resistance as well as the 1.26 level, which, as you can see, is currently being retested as support by way of a hammer candlestick pattern, a bullish signal among candlestick traders, with 1.2650 set as the next upside objective.

The recent H1 retest at 1.26 is interesting, perhaps enough to draw in additional buyers today.