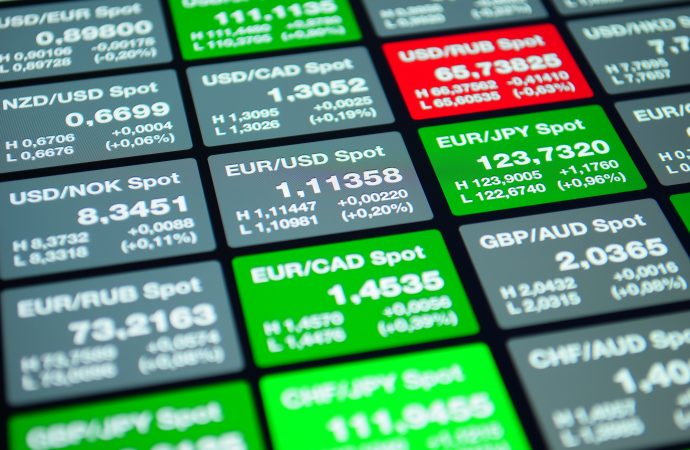 Albeit off session tops around 92.41, the US dollar index (ticker: DXY) concluded largely unmoved Monday. Meanwhile, Europe’s single currency wrapped up in the shape of a doji indecision candle in response to US banks closing their doors in observance of Independence Day.

Underpinning a potential advance from $1.1836, the RSI pencilled in bullish divergence, with the indicator’s value venturing out of oversold space. This implies that despite price registering fresh lows, downside momentum has slowed and cautions that buyers could make an entrance.

As for trend on the daily scale, the currency pair has exhibited a consolidation phase since 2021, following healthy gains in 2020.

The RSI value remains within touching distance of overbought territory—housing resistance at 78.97 (active since the beginning of this year).

Acknowledging monthly flow trades at support from $1.1857-1.1352, together with the monthly trendline resistance, extended from the high $1.6038, giving way mid-2020, buyers could make a show in the summer months. On top of this, the daily chart shows price hugging Quasimodo support from $1.1836. Consequently, price may knock on the door of the 200-day simple moving average around $1.1998.

Therefore, buyers standing ground off the current 100-period simple moving average today to take aim at $1.19 should not surprise.

The daily chart found itself off supply-turned demand at $0.7453-0.7384 Friday, recovering from year-to-date lows and developing a bullish outside reversal candle. Interest to the upside has the 200-day simple moving average at $0.7566 to target, closely followed by resistance at $0.7626.

The outlook from the RSI shows the indicator is forming bullish divergence, informing traders that while price recorded lower lows, downside momentum has decelerated, proposing the $0.7453-0.7384 response may pull in additional buying.

Technically speaking, the candles are at an interesting juncture.

The RSI has stepped higher since May, limited within the walls of an ascending channel between 58.82 and 47.51.

Heading into the early hours of London on Monday, ¥111 bids were absorbed and the currency pair touched a low of ¥110.80. Recent hours, however, witnessed price hammer out an AB=CD pattern, completing at the 100% Fib projection from ¥111.06, accompanied by a 100-period simple moving average and neighbouring resistance at ¥111.16.

Activity out of the RSI reveals the value spent Monday engaging with oversold territory, though left support at 18.76 unchallenged. As of current price, the indicator trades at 44.00.

The long-term monthly chart is in the process of taking on higher levels, following the recent retest of descending resistance-turned support. This places a question mark on daily resistance at ¥111.88-111.20 and, ultimately, throws light on daily supply from ¥112.68-112.20. This also implies daily trendline support, taken from the low ¥102.59, is in a favourable position.

¥110.50, assuming a bearish scene unfolds, is also a zone likely to be of interest for buyers seeking longs in line with higher timeframes.

Since February this year, GBP/USD has echoed a rangebound environment just south of $1.4377: April high 2018. This follows December’s (2020) trendline resistance breach, taken from the high $2.1161, which could serve as support if retested.

Friday’s bullish outside reversal also places emphasis on a possible test of resistance coming in at $1.4003.

Momentum, measured by the RSI, has slowed to the downside of late, despite fresh (price) lows forming. This is shown by way of RSI bullish divergence, with the indicator also approaching the lower side of the 50.00 centreline.

The second half of last week saw price bond with Quasimodo support from $1.3761, handing over the baton to buyers on Friday. Monday, as you can see, extended recovery gains, yet was not really anything to write home about.

Lower on the curve, Quasimodo resistance made its presence felt on Monday at $1.3861. Easing from this region today could land the currency pair at the 100-period simple moving average around $1.3814, closely followed by $1.38.

With reference to the RSI, end-of-week trading introduced a top around oversold resistance from 72.00, with the indicator heading for a possible test of the 50.00 centreline on Monday.

Having last week form a bullish outside reversal on the daily scale, either a retest of $1.38 or a break of H1 Quasimodo resistance at $1.3861 is likely to be considered bullish, with $1.39 and H1 resistance at $1.3935 on the radar as possible near-term targets.