July 3rd 2020: DXY off Worst Levels Ahead of US Independence Day 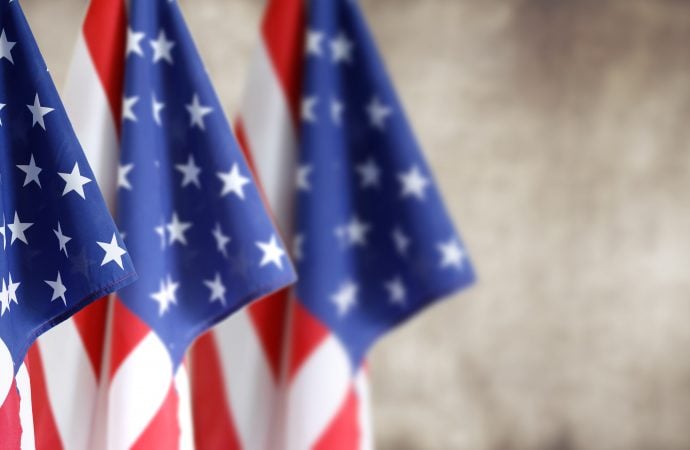 As you can see, bid/offers appear relatively even right now and the aforesaid Fib targets have yet to be met.

Wednesday, amidst a broad dollar sell-off, had EUR/USD chalk up a strong H4 bullish close. An extension to the upside amid Asian trading and the early hours of Europe Thursday brought channel resistance (1.1422) into view. From here, optimistic US non-farm payrolls data provided fresh USD impetus, weighing on EUR/USD upside into the closing stages of the session.

The rally-base-drop supply viewed at 1.1288/1.1278 (boasting strong downside momentum out of its base) had its upper edge taken Thursday, in favour of the 1.13 level. Buyers took a back seat from here, aided by upbeat US macroeconomic data.

Thursday’s analysis featured 1.13 as viable resistance, which, as you can see, served well.

Going forward, also highlighted in Thursday’s writing, monthly supply at 1.1857/1.1352 emphasises a bearish tone in this market, while the daily chart reminds traders there’s also scope for a drop to the 38.2% Fib level at 1.1106. 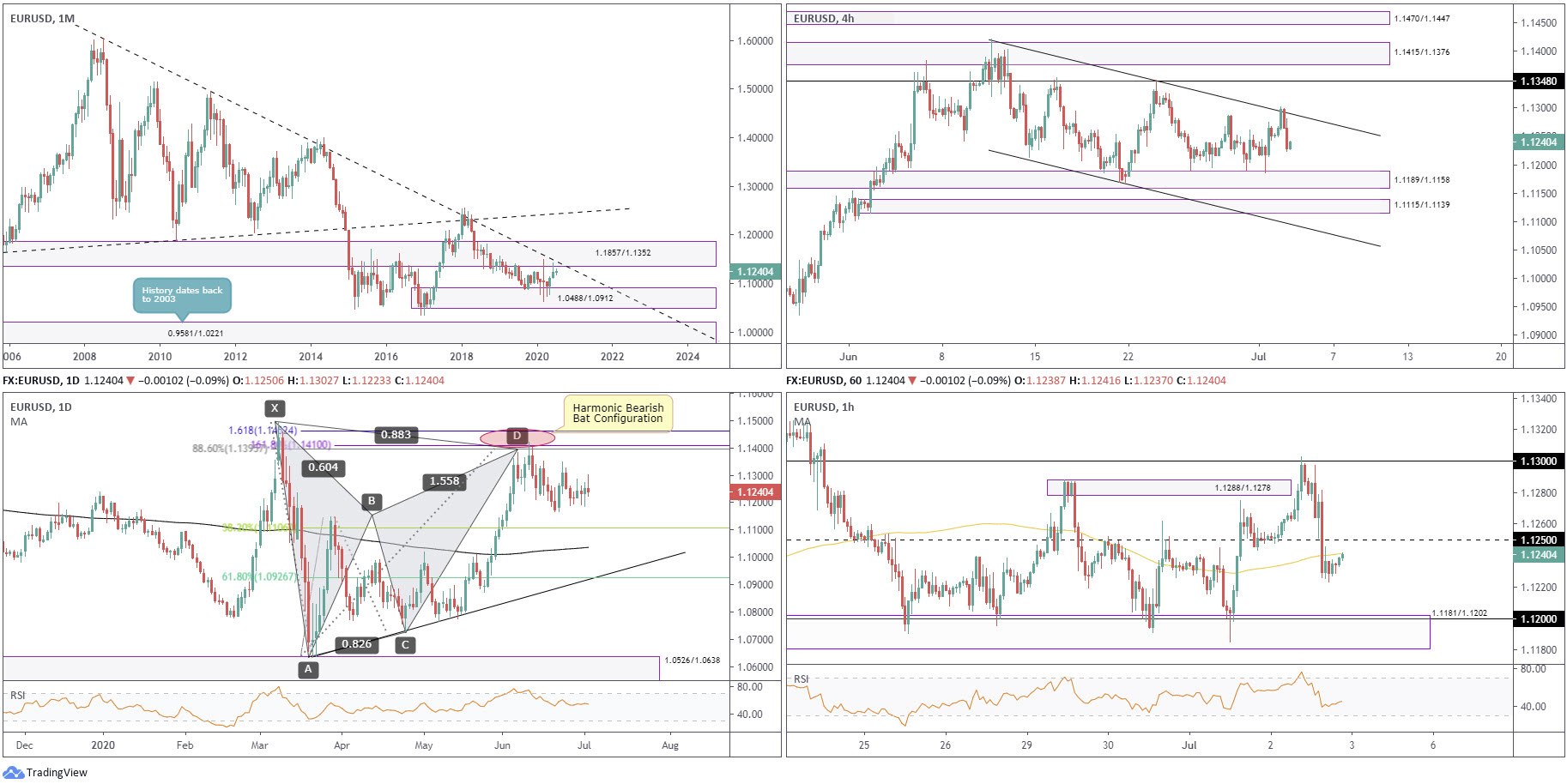 May’s extension, as well as June’s follow-through, has supply at 0.7029/0.6664 echoing a vulnerable tone at the moment, particularly as intersecting long-term trendline resistance (1.0582) shows signs of giving way.

Following a period of hesitation, AUD/USD bulls made an entrance Tuesday, with recent price swinging 0.6931 resistance back into action.

In case of a break to the upside, two trendline resistances inhabit territory close by (prior supports – 0.6744/0.6671). Support at 0.6755 also remains in position to the downside, with a break shedding light on the 200-day simple moving average at 0.6668, a dynamic value in the process of flattening, following months of drifting lower.

Since June 10, H4 has been in the process of forming a (bullish) pennant pattern between 0.7064/0.6776, generally considered a continuation pattern among chart pattern traders. As you can see, the pair mildly advanced Thursday, breaking the upper boundary of the aforesaid pennant and later retesting the latter as support.

Outside of the aforesaid configuration, traders will note supply at 0.7058/0.7029 falls in as an initial upside objective.

With the help of optimistic US employment data, intraday price movement tagged 0.6950 resistance yesterday, whipsawing through supply at 0.6948/0.6935, and breached trendline support (0.6832). This also put forward a near-test of 0.69, a base positioned ahead of the 100-period simple moving average at 0.6891.

As of current price, the couple is circling around the underside of the recently broken trendline support.

According to the monthly timeframe, although we’re still trading within supply at 0.7029/0.6664, price is testing waters above a connecting trendline resistance. In addition to this, daily sellers appear ready to recapture resistance at 0.6931. This, along with a H4 close north of the bullish pennant pattern, helps confirm upside on the higher timeframes.

As for the H1 timeframe, intraday traders are likely zeroing in on 0.6950 resistance. A break of this region adds weight to the pair’s upward bias.

April and May were pretty uneventful, with June also wrapping up indecisively in the shape of a doji candlestick pattern.

Despite failing to connect with the 200-day simple moving average at 108.37, upside momentum came to an abrupt halt Wednesday and produced a bearish outside day. This, in addition to Thursday’s lacklustre performance, still has light shining on a possible run back to demand at 105.70/106.66.

Traders went head to head at resistance from 108.09 in the early stages of Wednesday, with sellers dwarfing buyers.

Short-term technical movement on the H1 is engaged in some serious chop around 107.50 and the 100-period simple moving average.

Local supply at 107.71/107.58 came under pressure heading into the US session Thursday, though failed to secure ground north of the zone. 107.50, consequently, is now back in play.

While we are still working with a bearish outside day pattern on the daily timeframe, H1 sellers are unlikely to commit under 107.50 owing to the top edge of H4 demand set close by at 107.28.

On account of the above, chart studies suggest current H4 demand is located in a favourable position, with plenty of sellers (liquidity) to buy into. 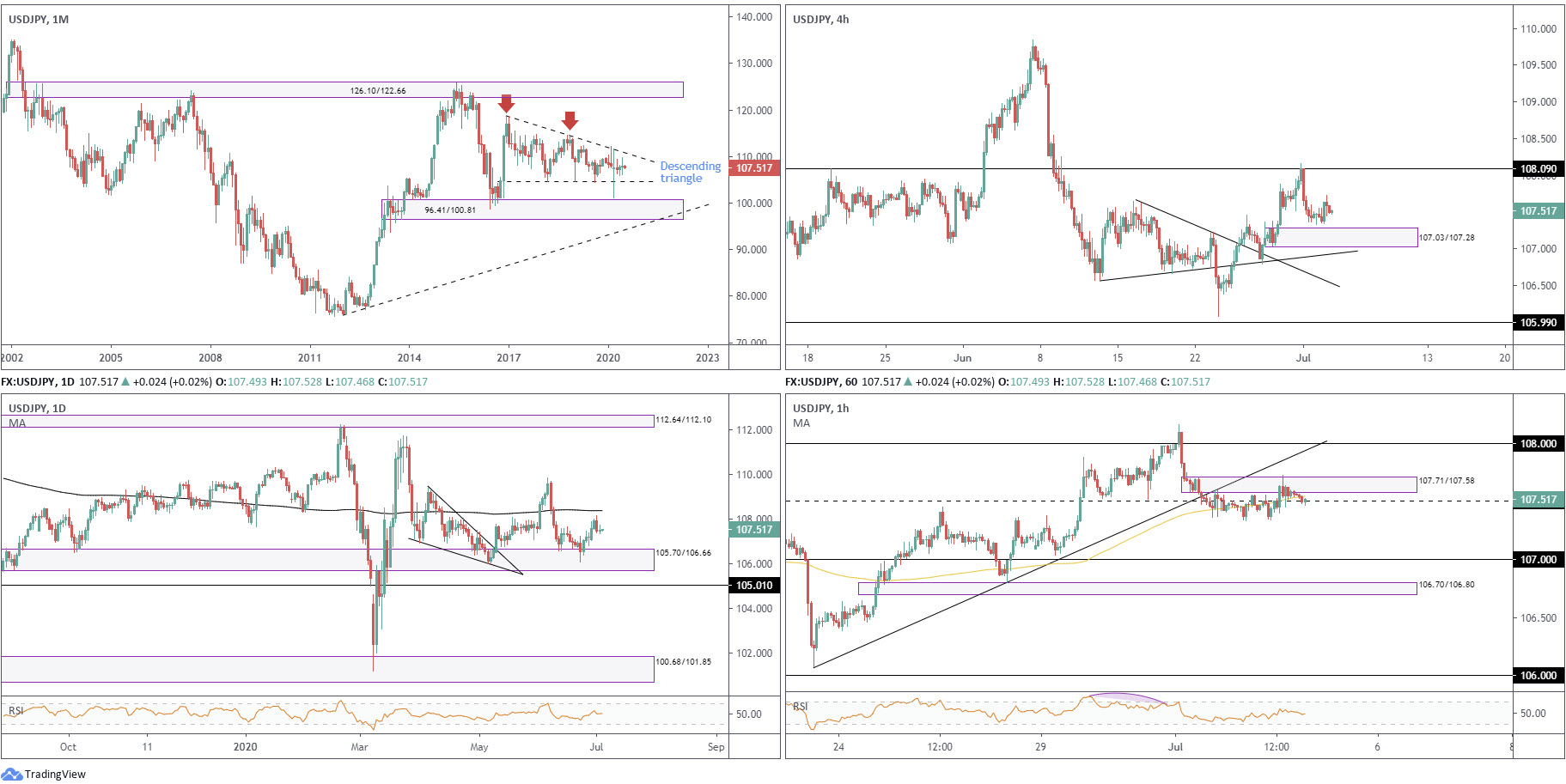 Support at 1.1904/1.2235 and long-term trendline resistance (1.7191) remain clear structure on the monthly timeframe, with the latter prompting a notable upper shadow in June.

Demand at 1.2192/1.2361 recently welcomed price action, stirring buyers and consequently chalking up two back-to-back bullish candles, each closing just shy of best levels. Current demand, as underscored in recent analysis, is an area not only fastened to the top edge of monthly support, it is also considered the decision point that broke 1.2647 (April 14 high).

The 200-period simple moving average at 1.2681, in the event buyers regain consciousness, is likely marked as the next available resistance on this timeframe.

Heading into the closing stages of the session, price found a mild degree of support around 1.2457, planted just ahead of support coming in at 1.2453. Beneath here, we could see sellers liberated until crossing paths with demand at 1.2360/1.2386.

Thursday observed a large portion of London’s session attempt to secure ground above the 1.25 level, though failed as we transitioned into US flow, aided by stellar US jobs figures.

Chart pattern traders may also notice a potential head and shoulder’s top forming. A retest at the underside of 1.25, followed by a dip to fresh lows would form the right shoulder and confirm the pattern.

The daily shooting star candlestick, putting across a bearish tone, together with a potential head and shoulder’s formation on the H1, may be sufficient to override H4 support at 1.2453.

Alternatively, a strong bid from 1.2453 could see price action work its way back above 1.25.