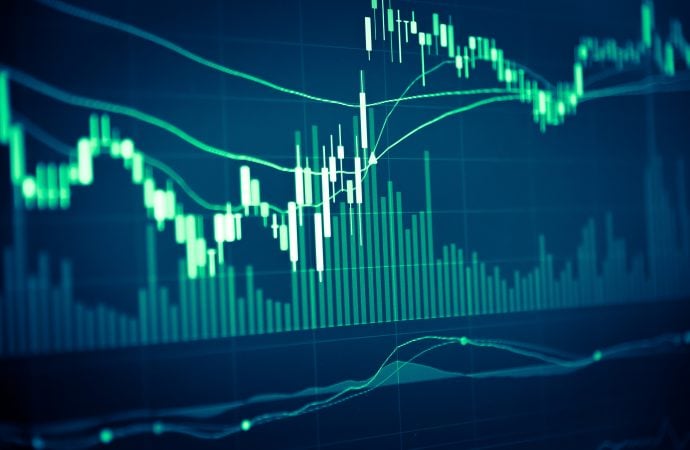 Interestingly, July, currently trading +4.6%, is on course to overthrow the aforesaid trendline resistance and supply.

Rolling out a seventh successive bullish candle Monday, we’re now toying with highs not seen since late September 2018 as well as crossing paths with supply set at 1.1798/1.1723.

Further upside in this market, moves that overrun current supply, throws light on supply from 1.2012/1.1937.

In light of recent optimism, traders will see H4 price formed an interesting demand area coming in at 1.1682/1.1716, a point where a decision was made to break resistance at 1.1722. The move shines light on resistance close by at 1.1791.

Candlestick traders will also acknowledge the array of upper shadows, suggesting sellers may make an entrance as we head into Asian trading today.

It should also be noted the RSI indicator recently exited overbought territory.

A dip to H4 demand at 1.1682/1.1716 may be seen, movement that could entice dip-buying strategies to target the 1.18 region as an initial point of interest. This is based on the monthly timeframe’s strength to potentially override daily supply.

Last Wednesday’s action came within a stone’s throw away from reaching 0.7197 resistance, with Thursday delivering a bearish candle and snapping a four-day winning streak. Monday, however, replied with strength (full-bodied bullish candle) and took the currency pair to within touching distance of the aforesaid resistance.

In terms of the RSI oscillator, the value is still seen producing bearish divergence around overbought levels.

Following last Wednesday’s rejection at supply from 0.7198/0.7179, an area which houses daily resistance underlined above at 0.7197, Friday dipped a toe in waters just north of support at 0.7043.

Putting forward a mild recovery into the week’s end, Monday, as you can see, extended recovery gains and scored highs at 0.7150, drawing things to back within close proximity of the aforesaid supply.

With respect to the RSI oscillator, we recently trekked above 50.00 though remain reluctant to enter overbought terrain.

Technical developments imply the currency pair is eyeballing levels above 0.7150 resistance on the H1 today, with the under ledge of H4 supply set as the initial upside target at 0.7179, closely trailed by daily resistance at 0.7197 and then the 0.72 level on the H1. 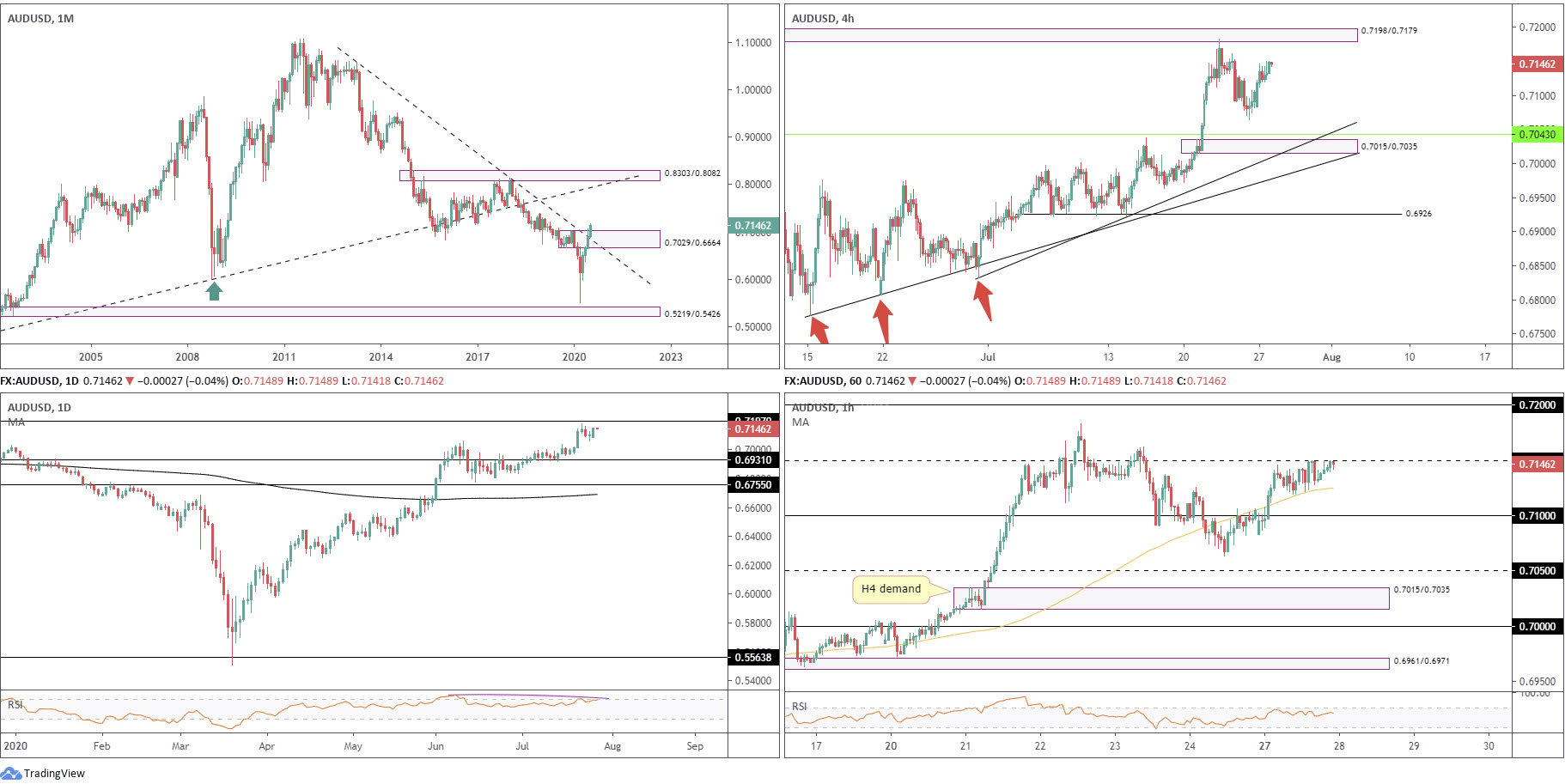 April and May were pretty uneventful, with June also wrapping up indecisively in the shape of a neutral doji candlestick pattern. July, nonetheless, currently trades lower by 2.4%.

Demand at 105.70/106.66 welcomed price action Friday, receiving a mild blow to its lower border, with Monday finishing the job and returning to levels just ahead of support coming in from 105.01. Beyond the latter, limited (obvious) support is seen until demand at 100.68/101.85, extended from October 2016.

Also noteworthy is the RSI indicator recently bottomed ahead of the oversold boundary.

Friday, as you can see, wrapped up with price retesting the underside of 106.07, a level which served well as resistance as we welcomed the new week.

The upper boundary of a large demand at 104.50/105.29 made a showing heading into the closing stages of Monday, as USD/JPY registered its third successive daily loss. It should be noted this area houses daily support at 105.01 and the lower base of the monthly descending triangle pattern at 104.62.

As above, USD/JPY remained depressed Monday, accelerating things through 105.50 support and testing levels just ahead of the 105 base. Heading into US trade, however, the pair staged a modest recovery to nearby 105.50 resistance.

Price is seen closing in on some considerable support right now. Monthly price is currently heading to 104.62 (lower edge of descending triangle), daily price trades within shouting distance of support at 105.01 and H4 tests demand at 104.50/105.29.

GBP/USD trades higher by 3.9% in July, with price action attempting to swarm long-term trendline resistance (1.7191) after support at 1.1904/1.2235 withstood downside attempts in April and May.

After mingling below the 200-day simple moving average at 1.2697 since July 9, last Tuesday squeezed above the aforesaid value and, after a fleeting retest of the latter, headed to nearby supply coming in from 1.3021/1.2844 yesterday.

Failure to hold supply, channel resistance (1.2813) is likely next in the firing range.

The RSI oscillator, as you can see, also recently greeted overbought levels.

Last week’s analysis noted the possibility of a bullish pennant formation between 1.2768/1.2644. As you can see, Friday kicked through the upper borderline of the aforesaid pattern and saw Monday overturn supply at 1.2851/1.2805. A possible retest of the latter could be seen today.

The break of the bullish pennant, generally considered continuation patterns, potentially stirred a buy signal, targeting 1.3008 (measured by calculating the preceding move and adding this value to the breakout point – pink). This implies we might be heading for higher ground.

With reference to the RSI oscillator, we’re seen trading around overbought territory, with 70.00 withstanding a number of upside attempts in recent movement.

Monthly traders are attempting to secure position above trendline resistance, while daily price bumped into supply at 1.3021/1.2844 which may hamper upside.

With the H4 bullish pennant pattern recently making its presence felt, emphasising the possibility of reaching 1.30s, and monthly showing signs of reaching for higher levels, this could be sufficient to push through opposition within daily and H1 supplies.