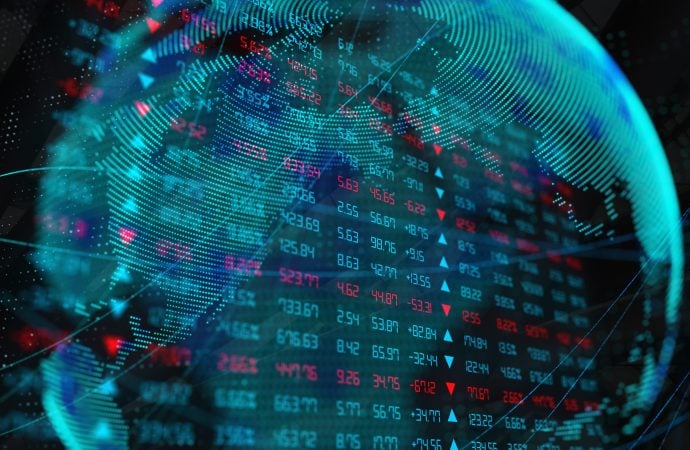 Stationed just south of the 100-period simple moving average ($1.1806), $1.18 has proven robust resistance in recent trading, aided by the US dollar index (ticker: DXY) refreshing multi-month highs as the market remains cautious regarding the spread of the Delta variant. This also weighed on risk-sensitive currencies, such as the Australian dollar and New Zealand dollar.

Month to date, July is down 2.2 percent.

The risk-sensitive Australian dollar staged a modest recovery off multi-month lows against the US dollar on Tuesday, finishing the session largely unmoved.

According to the relative strength index (RSI), oversold conditions remain. In light of sustained selling since early May, oversold readings are likely to remain, and between 50.00 and 40.00 could stand in as overbought signals.

A closer reading from the H4 scale reveals the currency pair shook hands with interesting Fibonacci structure between $0.7293 and $0.7315. Note that within this area, a 100% Fib projection at $0.7313 exists, a level harmonic traders will recognise as an AB=CD bullish formation.

Bulls occupying position out of current Fibonacci support directs focus to resistance at $0.7364, closely shadowed by supply at $0.7390-0.7371.

Interestingly, the technical landscape on the H1 scale has short-term action easing off $0.73, initially establishing what’s known as a hammer candle pattern—bullish cue. Further buying has Quasimodo resistance at $0.7347 to target, with subsequent bullish intent beyond here perhaps taking aim at $0.74 and the 100-period simple moving average around $0.7395.

The relative strength index (RSI), finding a floor off support at 27.02, is within striking distance of connecting with the 50.00 centreline. Moves north of the latter signal momentum gaining to the upside: average gains surpassing average losses.

With that being said, this market echoes a sell-on-rally scenario, with sellers possibly targeting H1 Quasimodo resistance at $0.7347 as a base to work with. Alternatively, H4 resistance from $0.7364 (and a possible whipsaw into H4 supply at 0.7390-0.7371) could draw a bearish scenario.

Month to date, however, July trades 1.1 percent in the red and is on track to chalk up a bearish outside reversal.

Tuesday observed the US dollar recover ground against the Japanese yen, lifted amid improved risk sentiment and higher US Treasury yields. Despite this, absence of support until supply-turned demand at ¥107.58-106.85—an area sharing chart space with the 200-day simple moving average at 106.92—opens the risk of further selling from a technical standpoint. This follows early July tunnelling through trendline support (taken from the low 102.59).

Concerning momentum, the relative strength index (RSI) spun lower from within a whisker of a recently breached ascending channel between 58.82 and 47.51 last week, and finished Tuesday just ahead of 40.00.

Supply at ¥109.83-109.71 was a noted area in Tuesday’s analysis (considered an important zone, having it been within this base a decision was made to channel lower), which, as you can see, entertained a short-term bearish tone heading into London yesterday. Although triggering a 40-pip decline, bulls entered an offensive phase going into US trading and dethroned the aforementioned supply as well as the 100-period simple moving average at ¥109.83.

From the relative strength index (RSI), the value is engaging with space above the 50.00 centreline and threatening moves into overbought, possibly targeting resistance at 78.38.

This area is in line with daily and monthly timeframes showing space to move lower.

Trend on this chart has been somewhat rangebound since late February. Though continuation moves to the downside beyond Quasimodo support at $1.3609 could trigger a bearish vibe.

As for momentum studies, the relative strength index (RSI) is pencilling in bullish divergence, informing traders of strengthening momentum.

Out of the H4 chart, we are seeing the currency pair cross paths with a 100% Fib projection at $1.3640 and a 1.618% Fib extension at $1.3613. Harmonic traders will acknowledge the Fibonacci formation represents an AB=CD bullish configuration. What’s also technically interesting is daily Quasimodo support at $1.3609 connecting with the H4 levels.

The modest $1.36 recovery seen into the close Tuesday, alongside the relative strength index (RSI) exiting oversold territory and breaching 39.68 indicator resistance, throws light on a possible run back to $1.37.

Daily Quasimodo support at $1.3609, the $1.36 figure on the H1 and Fibonacci structure on the H4 between $1.3613 and $1.3640 may interest buyers in this market, at least until reaching $1.37. Do be aware that the 200-day simple moving average aligns closely with the round number at $1.3695, and therefore could be a location sellers make an entrance to take advantage of possible bearish flow below the daily timeframe’s double-top neckline at $1.3670.