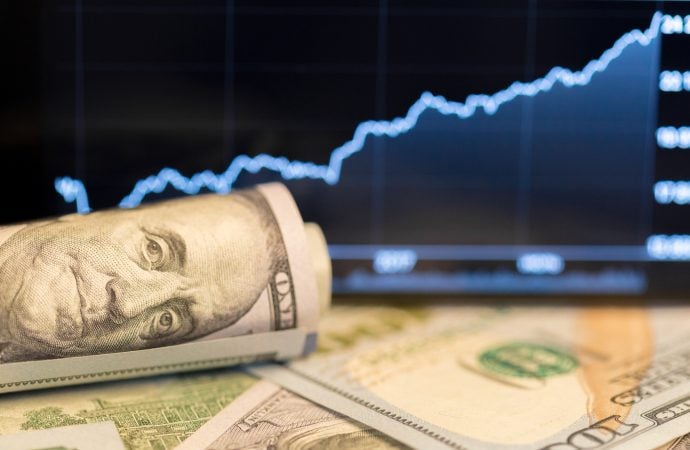 After touching 1.1168 (June 19), a mild bid has been observed, which, as you can see, recently gathered traction and retested the aforesaid PRZ. Following Wednesday’s shooting star pattern, considered a bearish signal among candlestick traders, Thursday ended lower after the DXY staged a healthy recovery off daily support at 95.84.

Supply at 1.1470/1.1447 made an entrance in recent trading, an area drawn from February 2019. Containing sufficient fuel to drive things back into the ascending channel between 1.1185/1.1345, Thursday welcomed a retest at channel resistance followed by a downward move.

Holding under channel resistance today has demand at 1.1324/1.1345 on the radar as the next point of consideration, with a break here unmasking neighbouring channel support.

Dipping from peaks just ahead of the 1.1450 resistance, we took orders from 1.14 and landed things at an area of local confluence, made up of demand at 1.1361/1.1377, channel support (1.1378) and the 100-period simple moving average. Recent action reveals bullish interest in the aforesaid area, which could ultimately force a retest at the underside of 1.14.

H1 demand at 1.1361/1.1377 faces considerable higher timeframe pressure. Though with intraday buyers showing intent from the zone right now, this could be enough to draw 1.14 into the frame for potential selling opportunities, in line with the bigger picture. 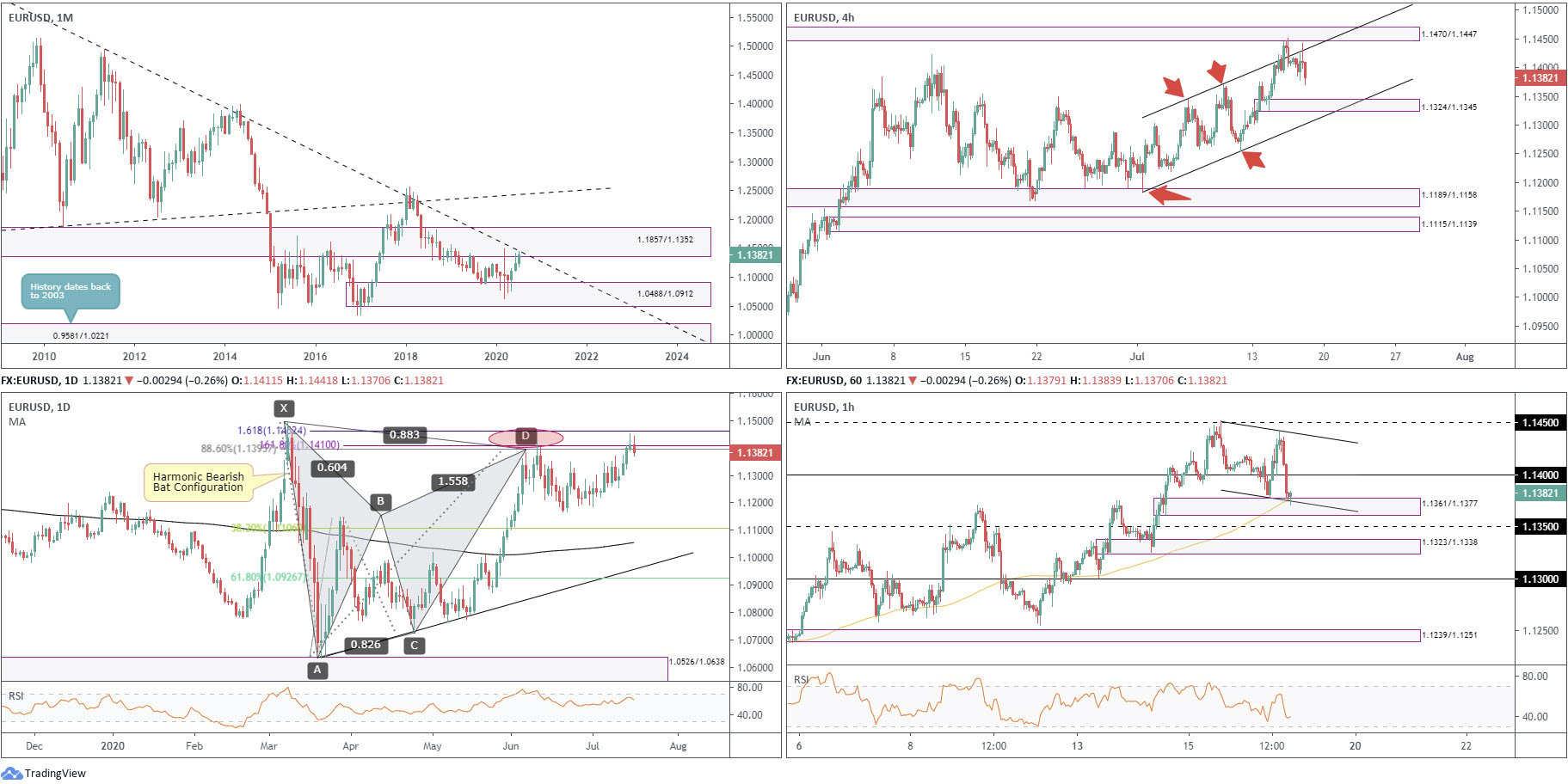 May’s extension, together with June’s follow-through, has supply at 0.7029/0.6664 echoing a vulnerable tone in July, particularly as intersecting long-term trendline resistance (1.0582) currently demonstrates signs of weakening.

The break to the upside shifted focus towards two nearby trendline resistances (prior supports – 0.6744/0.6671), levels coming within touching distance on Wednesday. Thursday, as you can see, curved southbound and snapped a two-day winning streak, placing attention back on 0.6931.

With buyers taking a step back, sellers appear to be working towards support at 0.6926, which happens to intersect with trendline support (0.6776). Traders will note the aforesaid support also forms a close connection to daily support at 0.6931.

Thursday, following a whipsaw above 0.70, dropped through the 100-period simple moving average, shining light on 0.6950 support.

While monthly price reveals the possibility of added upside, daily, H4 and H1 timeframes are tipped for more under performance until reconnecting with at least 0.6950 support on the H1 and daily support at 0.6931.

As a result, a retest at H1 supply from 0.6999/0.6983 could come to realisation today and provide intraday sellers an entry point into the market. 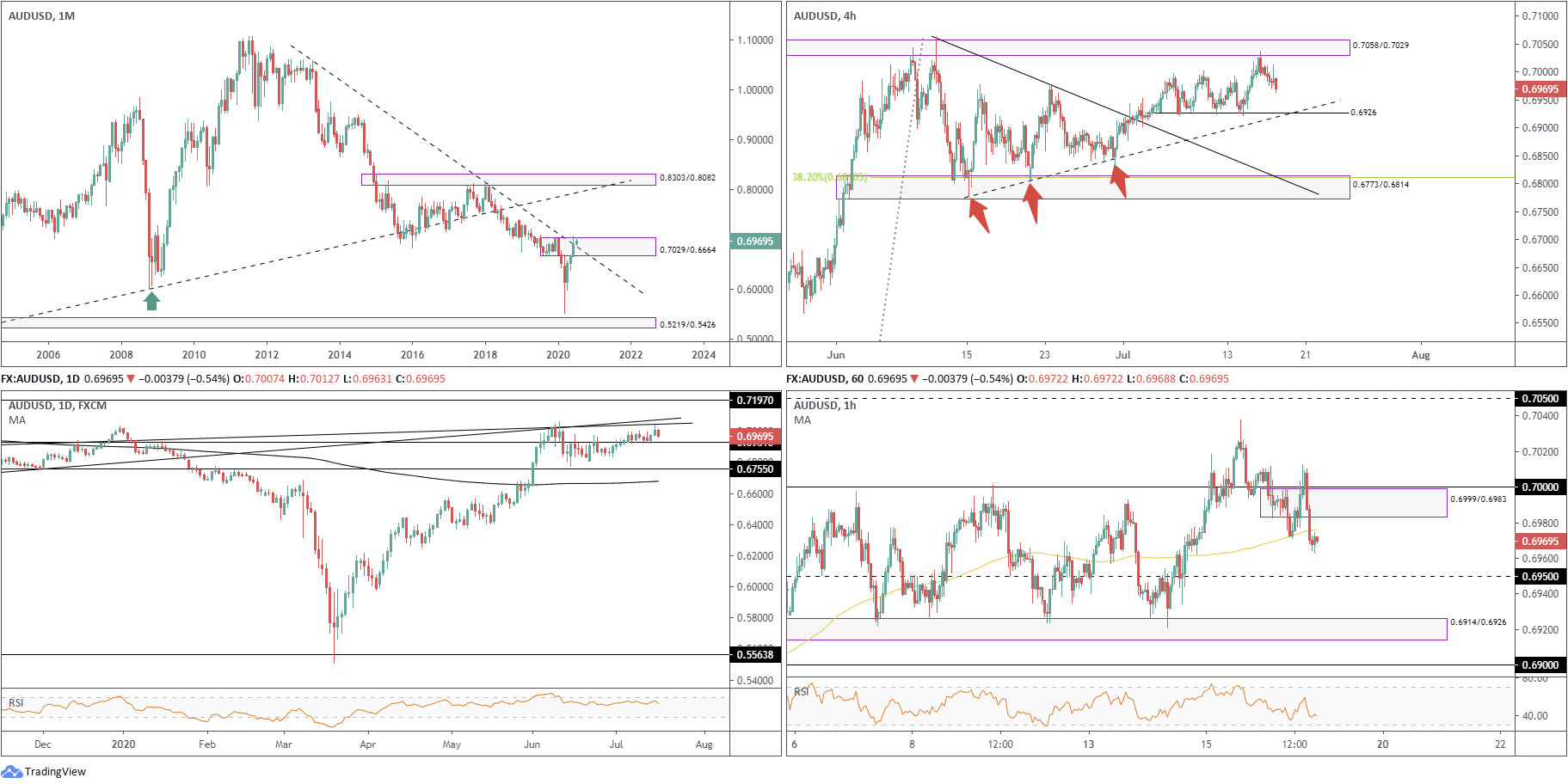 Demand at 105.70/106.66 continues to remain in focus on the daily timeframe. Although a reasonably hardwearing zone since early May, buyers appear to be lacking spirit. The previous reaction on June 23, as you can see, failed to reach the 200-day simple moving average at 108.36 before rotating lower, emphasising buyer weakness.

Below current demand re-opens the risk of a return to support at 105.01.

Recent developments on the H4 timeframe observed Thursday rupture channel resistance (108.16) and come within a stone’s throw away from testing supply at 107.60/107.42, an area which if breached may see price work its way towards peaks at around 107.77.

Another possible scenario worth pencilling in is a retest at the recently broken channel resistance as support.

The pair’s recovery Thursday powered through 107, the 100-period simple moving average, supply at 107.30/107.23 and also drew the RSI value into overbought waters.

Price calmed north of the supply at highs from 107.40 and is, as of writing, retesting the base as demand.

H4 puts forward a channel resistance break, though with supply situated nearby at 107.60/107.42, upside momentum may slacken off.

Buyers and sellers continue to mingle below the 200-day simple moving average at 1.2696.

Several candlestick patterns have emerged this week, providing a mixture of bullish and bearish signals.

After splitting channel support (1.2257) on the H4 timeframe, two core areas became available, demand at 1.2462/1.2506 and supply from 1.2720/1.2682. The former, as you can see, already made its presence known Tuesday, generously rebounding price by way of a bullish engulfing candle.

Additional areas of interest fall in at support from 1.2453 and peaks (red oval) around 1.2667, which may hinder price reaching the aforesaid supply zone.

Technically, there’s not really much in terms of active supply and demand to work with on the H1 chart today.

Dethroning 1.2550 today (intraday traders may interpret this as a bearish signal) may throw light on the 1.25 level as a bearish target. 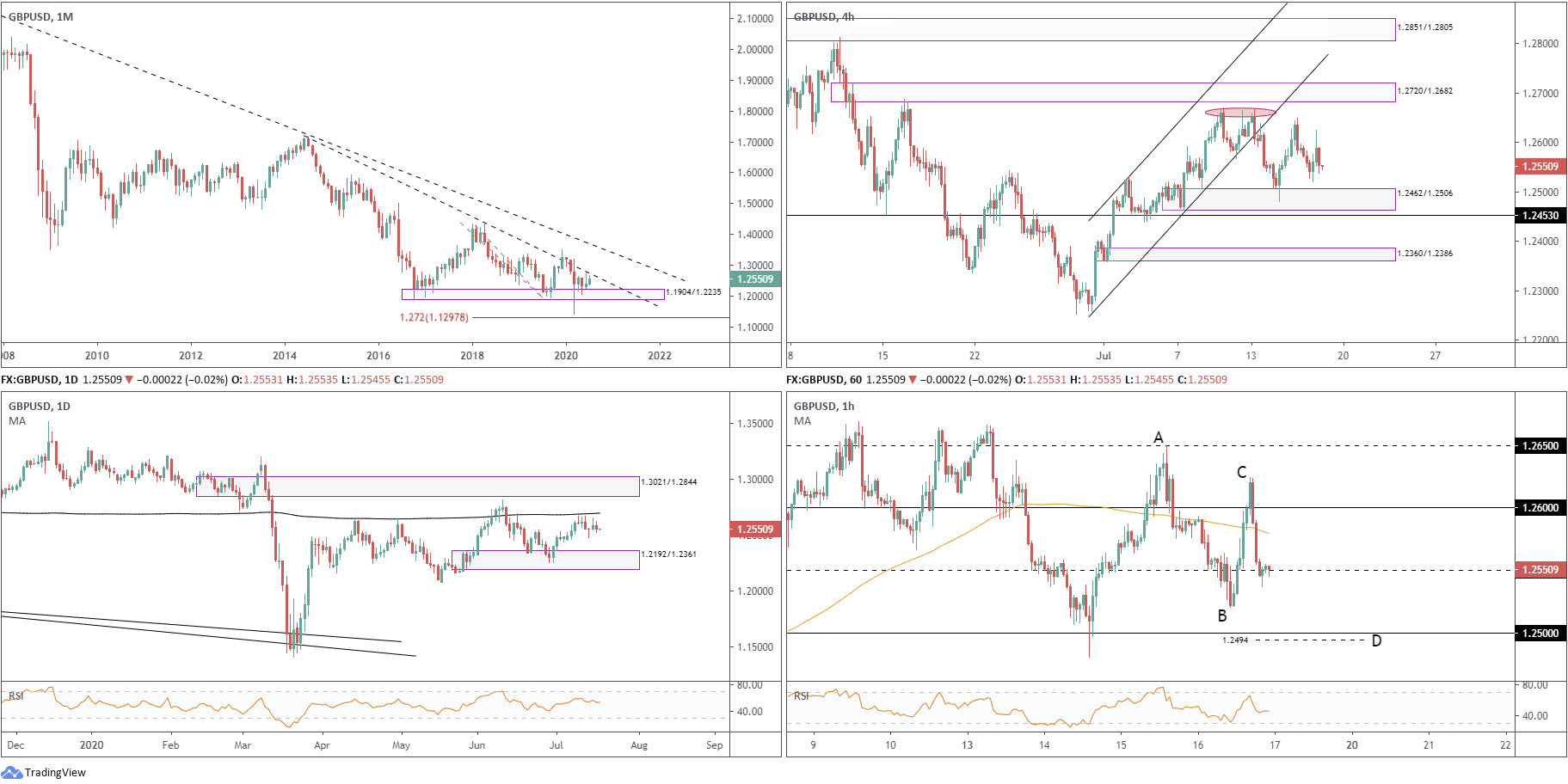