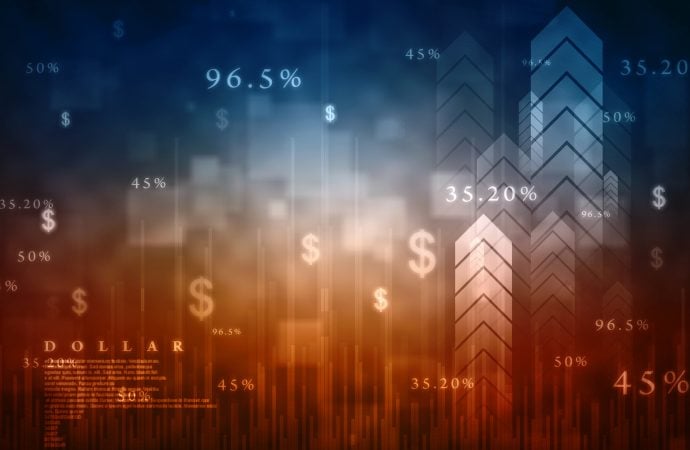 The US dollar, according to the US dollar index (ticker: DXY), finished Monday off best levels, albeit in mildly positive territory, which weighed on EUR/USD movement.

EUR/USD price remains communicating with Quasimodo support at $1.1836. Further outperformance, therefore, could be on the cards, targeting the 200-day simple moving average around $1.2001. Territory below $1.1836 shifts interest to another Quasimodo formation at $1.1688.

With regards to trend, we have been somewhat rudderless since the beginning of the year, despite healthy upside in 2020.

The relative strength index (RSI) exited oversold (bullish cue) last week, with the indicator’s value on the doorstep of the 50.00 centreline. Crossing above the latter helps add weight to upside action.

As for the relative strength index (RSI), the value recoiled from trendline support, extended from the low 25.51. Should the indicator venture north of the 50.00 centreline, overbought settings could be seen, along with resistance at 78.97.

Having noted daily price reigniting interest at Quasimodo support from $1.1836, and monthly crossing swords with the upper side of support at $1.1857-1.1352, moves to the 200-day simple moving average around $1.2001 may materialise.

Shorter term, although H4 Quasimodo resistance calls for attention at $1.1880, H1 suggests a breach of this level to test H1 demand-turned supply at $1.1895-1.1911 and associated confluence (additional resistance).

But, as highlighted in Monday’s technical briefing, given higher timeframes propose higher levels, a sizeable reaction from either of the aforesaid H1 or H4 areas is questionable. Consequently, elbowing above $1.19 perhaps unlocks the door to another H4 Quasimodo resistance at $1.1956, action breakout buyers are likely to be drawn to.

The relative strength index (RSI) settled Monday above the 50.00 centreline, indicating moves to overbought and associated resistance at 78.26 might take shape.

Against the backdrop of higher timeframes, which seats buyers in a favourable position (support), the $0.75 figure and H4 resistance at $0.7508 garnering attention is possible.

July trades 0.7 percent in the red.

The US dollar eked out gains against the Japanese yen on Monday, extending Friday’s modest recovery.

In terms of the relative strength index (RSI), the indicator dropped through the lower wall of an ascending channel between 58.82 and 47.51 last week and appears poised to retest the breached boundary this week.

A closer reading of price action on the H4 scale has the unit within a stone’s throw from resistance at ¥110.48, closely tracked by trendline support-turned resistance, taken from the low ¥108.56. This, of course, follows last week carving out Fibonacci support between ¥109.48 and ¥109.70.

In terms of the relative strength index (RSI), we are testing waters ahead of overbought space, with resistance also on the scene around 78.38.

Highlighting last week’s trendline support breach on the daily timeframe clouds this market with a somewhat bearish vibe, particularly for swing trading strategies. This also places a question mark on present conviction above the monthly timeframe’s descending resistance-turned support, taken from the high ¥118.66.

Resistance at $1.4003 remains centre this week—a level displaying commitment since March of this year.

The relative strength index (RSI), following earlier bullish divergence, is now in the vicinity of the 50.00 centreline. Venturing above the latter would help set out a bullish tone.

Additional levels of interest remain at resistance from $1.3935 as well as a support level coming in at $1.3834.

The relative strength index (RSI) ended the day flirting with the 50.00 centreline, following an earlier bottom at 43.00.

From the bigger picture, daily resistance at $1.4003 is a key level on higher timeframes, according to the current technical landscape. Though in the event sellers take control, the spotlight will be directed to daily Quasimodo support at $1.3609.