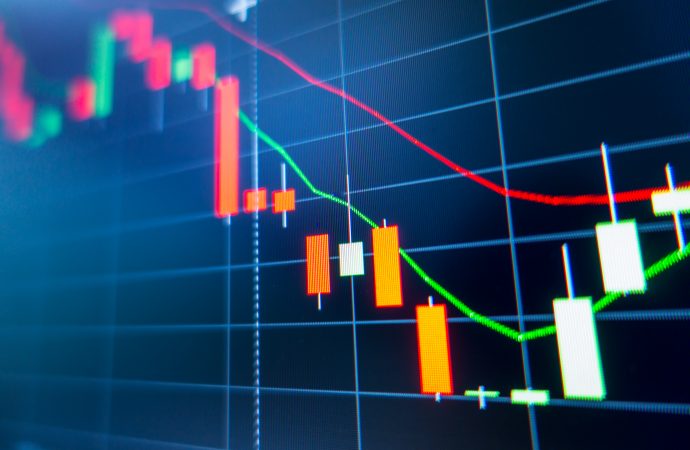 The relative strength index (RSI) is offering little in terms of direction at this point; the indicator is circling the 50.00 centreline.

Bulls embraced a modest offensive phase deep within prime support at $0.6968-0.7242, though current trade echoes a bearish tone (AUD/USD down -1.4 percent on the week).

Should buyers regain footing, resistance is formed at $0.7501.

Leaving resistance—made up of a 61.8% Fibonacci retracement at $0.7340, a 100% Fibonacci projection at $0.7315 and an ascending resistance, drawn from the low $0.7106؅—unchallenged, the currency pair is currently pursuing lower levels.

Support at $0.7021 calls for attention to the downside.

Latest developments out of the H4 chart reveals the technical pendulum is swinging in favour of sellers at the moment. A Quasimodo resistance-turned support at $0.7187 was overthrown, and now serves as possible resistance going forward.

As a consequence, short-term flow is tipped to further underperform until support between $0.7097 and $0.7121 (composed of a 1.618% Fibonacci projection, a 61.8% Fibonacci retracement and horizontal price support). Traders, therefore, may watch for short opportunities on any retest of $0.7187.

The relative strength index (RSI) is making its way out of oversold territory, a move that will be looked upon by some technicians as bullish.

The technical picture from the relative strength index (RSI) shows the indicator on the verge of exiting overbought space. This is generally considered a bearish signal. The caveat, of course, is the RSI can remain within overbought territory for a prolonged period amidst trending environments.

Alternative trendline support (drawn from the low ¥113.14) is within range of price, following rejection from Daily Quasimodo resistance at ¥116.33. Support is also seen a handful of pips south of the current trendline at ¥115.38.

$117.76-117.07 supply is fixed above the daily level (not visible on the screen); therefore, a break of the latter shows room to press higher, in line with the current uptrend.

Fibonacci support between ¥115.59 and ¥115.71, once again, demonstrated its value as a technical floor on Thursday, accepting a modest rebound during the early stages of both London and US sessions.

The above indicates ¥116 could hamper upside attempts on the H1 timeframe and perhaps ignite a wave of selling, action consistent with higher timeframe resistances. ¥115 (applied to the H1) serves as a reasonable downside target, converging closely with daily Quasimodo resistance-turned support at ¥114.97.

Resistance at $1.3629-1.3456 made a show in recent weeks—current candle action displaying a doji indecision candle—following a mild pullback from December lows of $1.3160.

Sellers responding to current resistance will likely take aim at the double-top pattern’s ($1.4241) profit objective—measured by taking the distance between the highest peak to the neckline and extending this value lower from the breakout point—around $1.3093.

Trendline resistance, taken from the high $1.4250, together with neighbouring resistance from $1.3602, remains a possible headwind for GBP/USD. The 200-day simple moving average is also circling above current resistance at $1.3737.

Quasimodo resistance at $1.3580 remains a key base on the H4 chart at the moment, with a breach of this level shining the technical spotlight on supply coming in at $1.3665-1.3625.

Demand is equally important to note at $1.3428-1.3444, receiving price action at the beginning of the week as traders capitalised on ‘dip-buying’ movement.

Despite the H1 (and H4) showing bulls governing control, we can see from weekly and daily charts (resistance) sellers could soon take the wheel.